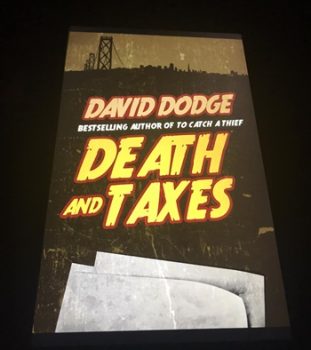 And we’re wrapping up another summer run of A (Black) Gat in the Hand with Back Porch Pulp #2. So, here we go!

Back Porch Pulp is reading the first novel by David Dodge. He is best known as author of the thriller novel, To Catch a Thief.

Which became a famous Cary Grant movie, directed by Alfred Hitchcock. I saw that on the big screen at The Ohio Theater. That was a treat.

I like his adventure novel, ‘Plunder of the Sun.’ Which became a not-famous movie, with Glenn Ford. Hard Case Crime reissued that book, introducing me to the author.

Dodge was an accountant. And his first couple novels were hardboiled ones starring San Francisco accountant Whit Whitney. I wrote an essay on Dodge and two of his novels, last month.

Back Porch Pulp is enjoying the cooler (albeit humid) morning with this ebook.

This is a mix of both interesting and ‘not-so-much’ pulp-era writing tips – mostly from Writer’s Digest. Current essay is from The Writers Monthly.

I haven’t recognized any of the contributors yet – which is fine. Generally ranges from the twenties to the forties.

There was an interesting essay with a variation on Lester Dent’s Master Plot Formula. That seems like a future Black Gate topic.

His parents were friends with W.T. Ballard, the pulpster and Western novelist. Ballard created Hollywood studio troubleshooter Bill Lennox (one of my favorites). I wrote about Ballard and Lennox, here at Black Gate.

Bell has written several pulp-ish short stories featuring Wild Bill Armbrewster, a studio troubleshooter. They’re a bit heavy-handed in style, which makes them a mix of parody and homage – rather than just the latter. But they’re fun. And a cheap ebook. Free via kindle unlimited.

Wally Conger and I co-wrote a Black Gate essay on this book, and some essays featuring Armbrewster. 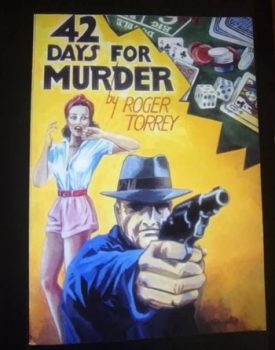 Roger Torrey is among the most forgotten men of the Black Mask Era. He was a Mask mainstay in the thirties, also appearing in Dime Detective, and many other titles.

He may well have been the hardest-drinking pulpster of them all – he made Hammett look like a tea-totaler.

He had trouble getting published as the old-style Hardboiled school changed to a more ‘noir’ style, and he settled for second-tier pulps. Torrey never changed.

He died of acute alcoholism at only age 45.

He wrote one novel, 42 Days, which I finished tonight. The title refers to the required six-week residency to get a Reno divorce.

Shean Connell is a NY PI who takes on a divorce case. He heads out to Reno and finds WAY more is going on – including murder.

His client is Todhunter Wendel. That unusual first name is almost certainly a tip of the fedora to fellow pulpster William T. Ballard. Who shared that middle name with his cousin: a moderately successful writer named Rex Stout!

This isn’t a bad novel, though I prefer Torrey’s short stories. Black Dog Press’ collection, Bodyguard: And Other Crime Dramas, shows Torrey at his best.

Daniel Stashower has a book coming out in a few weeks on the Butcher of Kingsbury Run. America’s leading expert on Edgar Allen Poe, as well as Harry Houdini, Dan is a fellow Sherlockian, and we both like Columbo, Monk, and some other things. I’m looking forward to it.

I decided to give myself a refresher on the unsolved serial killings that confounded Cleveland’s Public Safety Director, Eliot Ness. Yep – the former Untouchable. I’ve been a buff for years. It’s a fascinating subject – both nonfiction and fiction

From September, 1935 through August, 1938, a dozen bodies were found in Cleveland – all apparently from the same killer. The victims had been dismembered to some extent. Only two were identified, and several heads were never recovered.

The killings suddenly stopped, though it’s thought the count may well have been greater than twelve. A series of similar killings in New Castle, Pennsylvania, may have been related as well. There is a popular candidate, but the case remains unsolved to this day.

Clevelander Badal is likely the leading expert on the killings. He wrote another book on the only man arrested for the killings, as well as one on the New Castle murders. This is rather slow reading, but a must for anybody interested in the case.

Back Porch Pulp is inside, as it’s already warm out at 5 AM. I recently read William Bernhardt’s novel about Cleveland’s Mad Butcher, Nemesis. And I finished my re-read of James Badal’s exhaustive recounting of Cleveland’s Torso Murders.

One of two books next up is this highly-praised graphic novel. I’ve read it once. I’ve not read a lot of graphic novels. I recall thinking it’s got a LOT of pages that are predominantly black backgrounds.

I think that this and Nemesis have the same killer. We shall see.

A couple friends commented they like this a lot. It didn’t do much for me. I’m not crazy about the layout of the panels, or that there is SO MUCH black. It’s not an easy read for me. The story is okay, and while it fictionalizes some parts, it does use the most-identified suspect. Worth a read for buffs of the Torso Murderer. 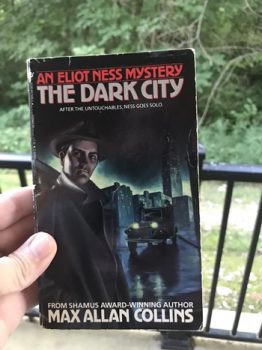 Back Porch Pulp makes an appearance! It’s been rainy, and then uncomfortably muggy when the sun comes back out. Not so much porch reading.

So, I’ve re-read a nonfiction book (James Badal) on Eliot Ness and the Cleveland Torso Murders. And I re-read a fiction novel (William Bernhardt). And, a graphic novel on them. Continuing my ‘Ness in Cleveland’ theme, back to re-reading the first of Max Allan Collins Jr.’s four novels about that era. I really like these. And his best-selling PI, Nate Heller, makes a cameo in book one.

As I recall, each one covers one of the major things Ness dealt with in real life as Public Safety Director. This one is about the corrupt police force. I think the other books involve the Numbers racket, labor racketeering, and of course, The Mad Butcher.

This is a fun series for a Ness fan.