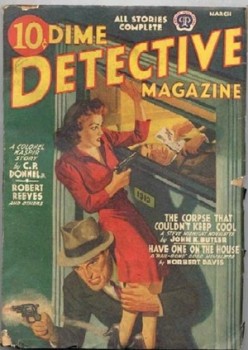 I’ve said many times that Norbert Davis is on my Hardboiled Mt. Rushmore. He’s not the first face carved in hardboiled stone, but he’s one of only four that are. Max Latin is my favorite Davis character, and he appeared in five issues of Dime Detective. There were five Benjamin Martin stories – all in Detective Tales. It was William (Bail Bond) Dodd that was Davis’ frequently recurring character. There were eight stories in Dime Detective between February, 1940 through December, 1943.

Dodd is a physically unprepossessing bail bondsman. He doesn’t actively seek out trouble. You can’t even call his adventures cases. “Have one on the House” was in the March, 1942 issue of Dime Detective. That issue also included a Steve Midnight story from John K. Butler. Midnight was a broke former playboy who found adventures as a night shift cabbie. There was also a Bookie Barnes story from Robert Reeves. Reeves broke into Black Mask in 1940 at the age of 28. He was serving with a bomber unit in the Philippines when he died in 1945, only one month before the war ended. He had continued to write while in the service. His budding career was cut tragically short.

Back to Dodd! Norbert Davis is remembered as perhaps the best at screwball hardboiled. However, then and now, that carries a stigma and he is generally dismissed because of it. And it’s both inaccurate and unfair. He could write straight hardboiled, like “The Red Goose,” which Raymond Chandler praised as influencing him when he decided to become a writer. But what Davis did so well was inject humor into his hardboiled stories, without overwhelming them with it. That’s the case with the Bail-Bond Dodd stories. It’s not that the characters are funny – it’s the situations that Dodd (and his assistant, Meekins) find themselves in.

Davis sets up Dodd in the first paragraph. ‘It was a fine day. It was a beautiful day. The sun was shining and the birds were singing, or anyway, chirping, and Dodd had just wrangled a date for the coming weekend with beautiful Daisy Delay who sang in the Rittenhouse Hotel Bar.’

You just know that isn’t going to last. We’ll look at the contrast in the first paragraph of chapter two. And the very last paragraph of the story circles back around to the opener. Davis was very good at what he did.

Arriving at work, he leafs through the mail and dumps it all in the trash. Breathing in fresh air from an open window, he realizes what one of the pieces mail had said. “Who? How much?” Dodd can’t even get through page one without the world throwing a brick at him. And he’ll be dodging more than bricks before this one is over.

He’s got a $613.02 overdue notice from the Dundee Liquor Supply Company. He immediately suspects his runner, Meekins. He savagely dials the phone to call him.

The five Max Latin stories make up my favorite Davis series. Like all pulpsters, Davis was paid (very little) by the word. And he used more adverbs than any other writer I know. They added up. Which to Davis, meant real money. He used five adverbs on page one. He uses three in one sentence on page two. Mark Twain and Stephen King advised against using adverbs. Davis did not subscribe to that approach.

Meekins is at the police station, looking for likely bail clients. Except business is dead, and he’s actually across the street shooting dice with some ambulance drivers. And apparently he’s winning with shady tactics. Meekins denies having any idea why Dodds received the bill. He didn’t buy anything from them. Dodd gets no satisfaction, or even any information, when he calls the liquor company.

Meekins calls back and tells the boss he thinks he knows what the bill is about. Meekins drags out the story, and Dodd prods him along, knowing he’s not going to like it. The relationship between Dodd and Meekins is a fun part of the series. Meekins tells Dodd that the latter owns the Gut Bucket Cafe.

“Are you crazy? How could I own a place I never even heard of?”

“Well, boss, it was such a minor matter that it sort of slipped my mind-”

“I’m not mad,” said Dodd. “Not a bit. Whatever gave you that idea? I’m as happy and carefree as a little child.”

“Just tell me all about it, my pal, my friend.”

“It had better be kinda good, too,” said Dodd. 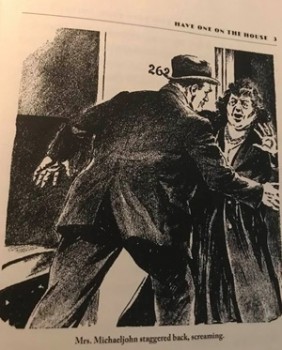 This is the kind of thing that happens to Dodd. Through no fault of his own, significant problems confront him. Being in the bail bond business, you figure he’d be around a rough crowd, so some trouble isn’t a surprise. But Dodd doesn’t encounter run-of-the-mill difficulties in these stories. And the problems, while often putting him in great peril, are the kind that make Dodd sigh wearily and move on from one to the next.

Meekins took a cafe/saloon as security for a $1,500 bond on Dipsey Grogan, an employee there. And when the employee jumped bail, Dodd (unknowingly) found himself its owner. And also responsible for its liabilities. Like, say, an unpaid liquor bill. And as Dodd discovers when he visits the dump, that ain’t the only one!

Remember how bright and happy things were in the opening paragraph for Dodd? Just one piece of mail changed everything as we start chapter two:

And so now, in sympathy, the weather had changed to match Dodd’s mood. It wasn’t a nice day any longer. Not any part of it. Black clouds had snaked in and camp[ed on every available inch of the sky and the rain came down in bucketing gusts that slapped greasily (adverb alert!) across the windshield of Dodd’s coupe and tweaked the windshield wiper playfully. Thunder walked and talked to itself in a malignant mumble.’

Good things don’t happen to Dodd for very long. Of course, that would make for a dull story, but I don’t think that makes Dodd feel any better. The Gut Bucket Cafe (yeah, there’s a name) is set up to lose money. Every time Dodd asks a question, he gets a depressing answer. It was opened to promote a piano player – a former professor of music who looks completely unimpressive.

The place is a collection of odd characters. There’s a blind news stand operator who lives in the basement; a shifty little race-track tout who bets with the cafe’s money; a girl who I think is a prostitute, and hangs out there; the Professor, who actually is an incredible piano player; a bartender out of a Victorian novel; the Professor’s estranged wife, who could have been a poster girl for the Women’s Christian Temperance Movement; and the former owner, who wants to marry the Professor.

Davis’ short stories feature ‘full characters,’ and several of them. They’re more than just scene fillers. The Max Latin stories are great examples of this. He truly is an under-appreciated pulpster.

Dodd exudes a sense of weary aspiration. He and Meekins want to find Goggins, so that Dodd doesn’t lose out on the bond. The city doesn’t like the name. Nothing can be easy for Dodd, and it’s changed to The Jive Hive.

Elinor (the presumed prostitute) was Grogan’s girlfriend. Dodd goes to her hotel room, trying to get a lead on Grogan. She’s dead on the bed, somebody switches off the light and Dodd is knocked unconscious. Things just keep getting worse for him. Which is certainly true when a policeman named Backus wants to arrest him for murder; with the Bible-thumping Mrs. Michaeljohn (the piano player’s wife) the key witness. Dodd’s lawyer short circuits that, and the bail bondsman goes to his car to get his gun in a bid to keep from getting killed. Smedley, the horse bettor, is dead in the car, stabbed.

Davis simply does a fantastic job of putting obstacles in front of his protagonist, keeping the suspense up. You’re rooting for Dodd to catch a break, but it doesn’t seem likely to happen. Finally, we move to the climax. Dodd and Meekins go to the basement room of Boardman, the blind man. Dodd switches off the light and they wait in the dark. Boardman comes in and flips the light switch, thinking he’s turning it off, giving the sightless man, in his own room, a huge advantage. But Dodd has outsmarted him and he ends up shooting Boardman.

Boardman had a grudge against Goggins and killed him. As part of the cover-up, he killed Elinor. And Smedly, And another man. And was going to add Dodd and Meekins. He was quite the blind guy.

Dodd even tidies up the love triangle subplot. And the Professor got a job playing at a local hotel, which is a money-winner for Dodd (who owns his contract as part of the cafe deal). It was a long, hard, dangerous road, but he comes out on top. And alive. Except…

Remember the beginning? He had a date with the piano player at the Rittenhouse Hotel Bar? Davis uses the very last paragraph to bring the story back to the very first one. She calls to talk about that job that the Professor got:

“He got my job, damn you! And do you know something else? I wouldn’t go out with you if you were the last man on earth and looked like Clark Gable to boot!”

Bail Bond Dodd is not a muscular super hero, or an intimidating guy with a gat. His greatest asset is determination and persistency. He doesn’t want to lose out on a bond. Though the center of the stories usually isn’t just about a bond he posted, leading to all kinds of difficulties for him. 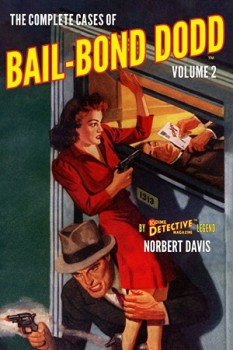