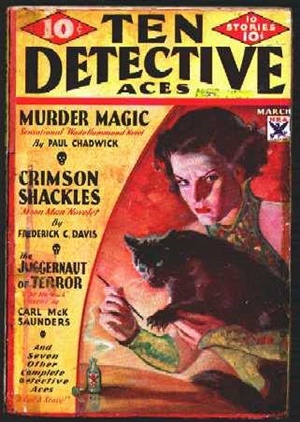 A (Black) Gat in the Hand continues on with quality guest posts (something’s got to make this column work, and it sure as heck isn’t my writing!) this week, as Andrew Salmon holds forth on pulpster Frederick C. Davis. I knew I wasn’t qualified to write about Davis (though I did hold my own on Norbert Davis!). And since Andrew, author of the excellent Sherlock Holmes Fight Club novels, wrote the introductions to Altus’ Press’ Moon Man collections, I knew he was the guy. So, read on!

Any good pulp author from the glory days of Classic Pulp had to be very good at two things: he or she had to be fast and versatile. And, of course, said pulpsmith had to have some modicum of talent thrown into the mix.

Frederick C. Davis (1902-1977) has all of these – in spades. Known today as the author of the first 20 Operator #5 adventures, one doesn’t hear his name come up when Max Brand, Erle Stanley Gardner, Lester Dent, Walter Gibson, Dashiell Hammett and Raymond Chandler are being discussed. And yet, you could pick an old pulp at random today and most likely find a Davis story within its crumbling yellow pages.

He wrote hundreds of pulp stories and a lot of them are really, really good. In addition to those Operator #5 yarns, he also created the Moon Man, cranking out 38 tales of the globed gladiator. Throw in Mark Hazard and Ravenwood and his versatility begins to show through.

The Moon Man, long out of print and never collected until recently, had a much more profound effect on comics than the pulp world of yesteryear. It’s long been established that Superman sprang, partially, from Doc Savage and Batman owes much to the Shadow. But few know how much Spider-Man owes to the Moon Man. Not the classic pulp character, the Spider – the Moon Man. Huh? Stay with me.

Has anyone ever had more fictional angst than Peter Parker? In the early issues of Amazing Spider-Man in the 1960s, he’s constantly torn between his career as Spider-Man and trying to squeeze in a normal life between the webs. He falls in love with Gwen Stacy, the daughter of Captain Stacy, the police captain sworn to bring the masked vigilante webhead to justice because Spidey’s good acts are considered criminal. 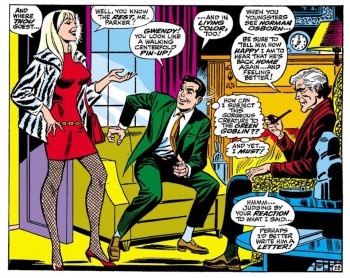 Thus Peter, as Spider-Man, must defy Captain Stacy’s best efforts, make the revered Captain look bad by eluding him time and time again, all while having respect and friendship heaped upon him by Gwen’s father. Peter suffers the woes of Job having to lie to and keep secrets from the people he loves.

Now consider the Moon Man’s situation in the 1930s. Stephen Thatcher is constantly torn between his career as the Moon Man while trying to squeeze in a normal life between escapades. He’s in love with Sue McEwen, the daughter of Gil McEwen, the police detective sworn to bring the masked vigilante to justice because the Moon Man’s acts of robbing from the rich to help the poor are considered criminal.

Thus Stephen Thatcher, a police detective himself, must defy his best friend’s efforts, make the revered McEwen look bad by eluding him time and time again, all while having respect and friendship heaped upon him by Sue’s father. Steve suffers the woes of Job having to lie and keep secrets from the people he loves. Also, Steve’s father runs the police department of Great City so the humiliation he brings to the force is three-fold.

There’s a bit of a connection there. Take a look at Mysterio if you have any doubts. That look is not a coincidence. And ol’ Jolly Jonah is Gil McEwen by another name. This is why I tell Spidey fans interested in pulp that they’ll like the Moon Man tales.

As much fun as it is tracing the roots of classic characters and who influenced who, we’re discussing Frederick C. Davis here and, to illustrate how he could approach a pulp tale from any angle, I’ve selected Moon Man and Operator #5 tales to highlight what Davis could do.

Since we’re on the subject of angst, let’s begin with the Moon Man tale. The Moon Man could go toe to toe with Spider-Man in this department and might even have the edge when the dust settles. Let’s look at a pivotal Moon Man tale, “Crimson Shackles” from the 3/1/1934 issue of Ten Detective Aces.

In the story, the insidious Red Six, a gang of international blackmailers, discover the Moon Man’s secret identity and blackmail Thatcher to commit crimes in their name or they will tell the people he loves that he is the notorious criminal everyone close to him hates. Thatcher’s boxed in and to add insult to injury, the Red Six reveal the Moon Man’s secret identity to Sue McEwen to further tighten the screws.

What follows is a riveting tale as Thatcher walks a razor’s edge, not to help the poor and needy of Great City but to preserve his secret identity. He’s even prepared to murder the members of the Red Six if that’s what it will take. As for Sue, she wants nothing to do with him when the identity of the Moon Man is revealed to her. His life is teetering on the brink and the tale comes down to Sue’s love for Steve. Is it cold and dead or is she willing to sacrifice all to save him? 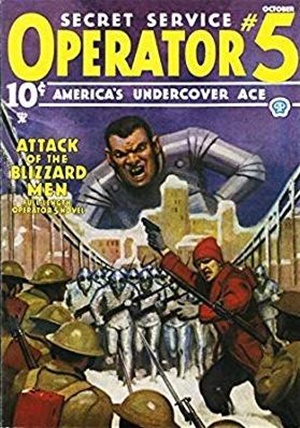 “Crimson Shackles” is one of the best Moon Man tales because the villain plot hinges on personal relationships and the actions taken by Steve Thatcher and Sue McEwen are done not just to beat the bad guys but also to save the tiny world the Moon Man orbits. The tension is palpable as the character-driven plot rockets along at breakneck pace.

In contrast, Operator #5’s “Attack of the Blizzard Men” (October, 1935), pits Jimmy Christopher against the army of an international syndicate of nations using a deadly weapon which freezes entire cities to killing temperatures. New York, Washington, Los Angeles, Chicago – all fall under the deadly cold until finally the President must send Jimmy Christopher to the frozen cities in a last-ditch effort to save the country.

As you can see, these two plots could not be more opposite. And yet Davis executes them both to perfection. While the Moon Man’s battle against the Red Six must be clandestine on a small scale with discovery lurking around every corner, Operator #5 is out to save the United States itself. Christopher’s battle against the Blizzard Men is edge of your seat excitement. Gambits tried and failed, desperately racing away from the closing circle of killing frost, perilous attempts to infiltrate the enemy camp while millions of people freeze to death.

Davis keeps the tension at fever-pitch during both of these tales. Will the Moon Man’s identity be revealed to the world? Will Operator #5 fail and the United States of America fall to the evil syndicate? The goals of the tales could not be farther apart. And it’s the human element that connects them both. Davis will have you slicing your fingers to ribbons turning the pages or staring at your screen until your eyes pop out of your head. Such is the mark of the consummate storyteller and Davis was one of the best.

If you’re new to his work, you’ve got a LOT of great stuff to choose from as the Moon Man and Ravenwood tales have all been collected. Other of his short-lived series are also coming out here and there and Operator #5 is available in ebooks and, soon, back in print from Altus Press. Davis knew his stuff and knew how to grab the reader by the throat and not let go. Dive in. You WILL be entertained.

Andrew Salmon has won several awards for his Sherlock Holmes stories and has been nominated for the Ellis, Pulp Ark, Pulp Factory and New Pulp Awards. He lives and writes in Vancouver, BC. His novels include: Fight Card Sherlock Holmes: Work Capitol, Blood to the Bone and A Congression of Pallbearers (collected in the Fight Card Sherlock Holmes Omnibus) The Dark Land, The Light Of Men, and Ghost Squad: Rise of the Black Legion (with Ron Fortier) and his first children’s book, Wandering Webber.

He is currently at work on the first of a series of Eby Stokes novels, a character who debuted in the Fight Card Sherlock Holmes trilogy as well as a myriad of other projects. To learn more about his work check out his Amazon page.

Bob Byrne’s A (Black) Gat in the Hand appears weekly every Monday morning at Black Gate (until they finally get around to changing the password!).