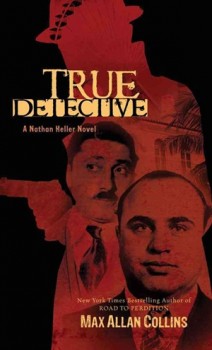 I met Frank Schildiner through our mutual love of Robert E. Howard’s writings and I recruited him to write the Solomon Kane entry in Black Gate‘s Discovering Robert E. Howard. We share a lot of reading interests, such as John D. MacDonald’s Travis McGee and… hardboiled stories. Frank is a leading light in the New Pulp movement and he appreciates pulp and hardboiled works from ‘now and then.’ So, I was happy when he decided to write about Max Allen Collins’ best-selling hardboiled PI, Nate Heller. Without further ado, I’ll turn it over to Frank!

“I was off-duty at the time, sitting in a speak on South Clark Street drinking rum out of a coffee cup.” Nathan “Nate” Heller, True Detective

Can you get more noir than that opening line? Welcome to the word of modern hardboiled fiction, Max Allan Collins style. The road is long and twisty, but the trip is ultimately satisfying to all lovers of this style of fiction. True Detective’s star, Nathan Heller is one of the heirs to a tradition established by such luminaries as Hammett, Chandler, and Cave.

Collins established his hardboiled credits back in 1977 when he took over the daily writing of the long-established daily comic strip, Dick Tracy. His work is still considered one of the reasons the strip continued after many storyline missteps throughout the 60’s and 70’s. One of his first acts was ending the sci-fi elements as well as removing the pseudo-hippy heroes that inhabited the strips.

When we meet Nate Heller, he is a morally ambivalent plainclothes police officer residing in Al Capone’s Chicago. He got his job on the department by asking a banker uncle to pull strings – a typical move in the moral cesspool that wracked the city’s politics. Heller’s position as a detective came as a reward for his willingness to lie for the Chicago mob in a murder case.

Like many hardboiled detectives, Nate Heller soon found himself confronted with the proverbial line-in-the-sand: the point where for all his moral ambiguity, he would not continue. Though not a white knight, Heller does possess an unflinching internal code of ethics that serves him in True Detective and through nineteen further stories.

In a very real sense, Max Allan Collins grants his readers a glimpse into the origins of his hardboiled hero. Most characters of this sort emerge fully formed-leaping onto the page, a veteran of their own dark world. Not so in the case of Nathan Heller. We meet the protagonist of the series in the opening pages of True Detective as a hard-bitten, semi-legal member of the Chicago police. From there we discover his friends, compatriots, and enemies along the way.

Which brings us to another fascinating aspect of the Heller series, established in the opening pages. I am speaking now of Nate Heller’s world, the environment he calls home through many books. This universe is incredibly familiar because it is almost precisely the one in which you and I currently exist. 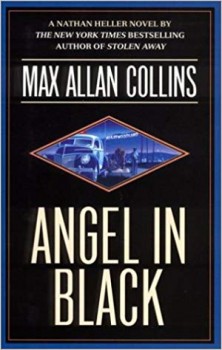 Collins, who possesses a remarkable knowledge of history, places his protagonist in situations that allows him interaction with legendary men and women of that period. Along the way in True Detective, Nate engages with legendary mobsters Al Capone and Frank Nitti, former Vice President of the United States Charles G. Dawes, Untouchables leader Elliot Ness,  Chicago Mayor Anton Cermak, columnist Walter Winchell, actor George Raft, and even a few “lesser” faces who rose to unimaginable heights of fame.

This basis in reality is a hallmark of the series, with future stories involving the death of Bugsy Siegel, clashes with political figures like Joseph McCarthy, flings with starlets like a young Jayne Mansfield and legendary dancer Sally Rand, and even terrifying cases like the Black Dahlia murder. Hardboiled history-not quite a new concept, but one that flows well under Max Allan Collins’s clean, flowing prose.

This novel’s main mystery involves Nate Heller’s first case at the behest of an imprisoned, but still quite viable, Al Capone. His fear, quite justified, is that his second in command, Frank “the Enforcer” Nitti, planned a “hit” on Mayor Anton Cermak. A scary but quite realistic scenario, since Nitti and Cermak, former compatriots in crime, fell out over the latter’s demand of a large piece of the monies earned from vice.

Heller’s job, based in his past associations with the Chicago mob, was to find and stop the assassin. This in and of itself would be enough to fill an entire novel. Many of the hardboiled conventions are present: dangerous gangsters, crooked cops, a lone man ready to save the day against powerful odds, the list goes on and on…

Instead of merely resting on these impressive proverbial laurels, Max Allan Collins adds a second mystery that provides a surprising twist in the tale: A lovely young woman requests Nate Heller’s aid in the search for her missing brother. In the hands of most writers, this secondary story would end up a clumsy method of adding a pretty girl to the mix – the last missing element in the novel. Happily, this is not so in True Detective. The beautiful woman’s presence directly affects the larger story and plays a strong part in the development of this modern hardboiled detective.

This is the overarching theme of these books, a multi-layered story mixing true events with some doses of fiction. Recommended subsequent Heller stories include True Crime, Angel in Black, and Chicago Confidential. Highly recommended for fans of hardboiled or historical fiction.

BOB’S NOTE: Best known for his graphic novel, Road to Perdition, which was made into a superb movie with Tom Hanks, Max Allen Collins is one of the greatest living practitioners of the hard boiled school. Whether reading his Nate Heller series, books about Eliot Ness’ time in Cleveland (my favorites), about his hitman, Quarry, or his works with Mickey Spillane, you’re in for an entertaining trip. I highly recommend checking out Collins if you haven’t.

Frank Schildiner is one of the leading lights in the New Pulp movement. He is the author of two books in the Napoleon’s Vampire Hunter series and two Frankenstein books. His latest creation, occult spy Johnny Rich, debuted earlier this month. Frank wrote the Solomon Kane entry in Black Gate’s ‘Discovering Robert E. Howard’ series.