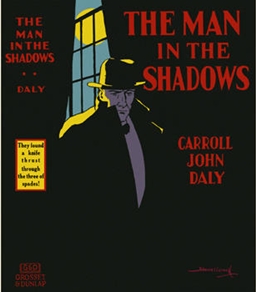 Quiz time: Who invented the hard-boiled school of fiction? And who was the first hard-boiled private eye? If you answered Carroll John Daly and Race Williams, you’d be like most folks. And you’d only be half right.

In December of 1922, Daly’s “The False Burton Combs” appeared in Black Mask Magazine and the hard-boiled school was born. In April of 1923, “It’s All in the Game” (which I’ve yet to read), with an unnamed protagonist, was printed. And on May 15, 1923, “Three Gun Terry” gave us Three Gun Terry Mack, first of the unnumbered hardboiled private eyes to follow for almost a century now.

In June, 1923, the first Race Williams story, “Knights of the Open Palm,” appeared in Black Mask and it is this story which most folks erroneously point to as the first one to feature a hard boiled private eye. In case you’re wondering, Dashiell Hammett’s Continental Op made his debut in “Arson Plus” in October of that year.

Three Gun Terry Mack only appeared in one more short story, (“Action! Action!” – Black Mask, January, 1924) and in one novel (The Man in the Shadows, 1928). But no matter, as he was really just a prototype for Race Williams, who would appear in some forty-ish stories and six serials/novels for Black Mask, a well as in other publications.

The tone is set from the first sentence on: “My life is my own, and the opinions of others don’t interest me, so don’t form any, or if you do, keep them to yourself. If you want to sneer at my tactics, why go ahead; but do it behind the pages – you’ll find that healthier.”

And in the second paragraph, “Sometimes they (crooks) gun for me, but that ain’t a one-sided affair. When it comes to shooting, I don’t have to waste time cleaning my gun. A little windy, that; but you get my game.” 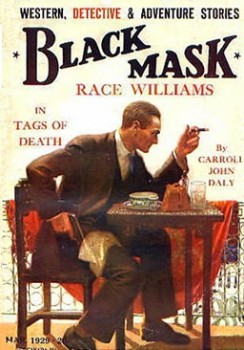 It’s like that through the entire story. “Sure, I said. You don’t take me for no Sir Lunchlot, do you? This is business with me. And to keep him from having a stroke of apoplexy, I tell him my trade.”

Cruising the streets, looking to drum up some business, Mack foils a kidnapping. He’s hired by the girl’s uncle to find a missing secret formula (isn’t every formula secret in fiction?). The formula suddenly reappears, Mack is paid off and we’re done. Except, of course, he doesn’t just go away, there’s more going on and we finish with the expected gunplay. It’s actually not a bad story.

But it’s just too hard to get past the heavy handed writing. “But he never finished that string of dirty epithets. I up with the butt of my gun and gave him a swipe across the face that made his lordly air look mighty cheap. And right here come the tactics that you may not agree with. You may question the ethics, but the results are good. Poor morals perhaps, but good, sound, common sense.”

Regarding Mack and Williams, what Daly did was turn the classic pulp western into an urban story. Hammett would bring a realism to the new genre and Chandler would paint word pictures of the ‘errant knight.’

But Daly was taking the shoot ‘em up action of the wild west and transplanting it to the city streets. And this was in direct contrast to the locked room and country cozy stories coming out England as part of The Golden Age. It reflected a Prohibition Era America.

So, while the man absolutely was not a stylist, he was writing fast paced, action packed stories of urban violence (no sex: Daly’s heroes were celibate). And he was successful at it.

Raymond Chandler famously said, “When in doubt, have a man come through a door with a gun in his hand.” Daly’s axiom could be stated as, “Start with a shooting and don’t stop until you type ‘The End.’”

In 1930, Black Mask readers voted on their favorite authors. Hammett finished a distant third, behind Erle Stanley Gardner. Daly was far and away the most popular, and it’s frequently stated that his name on the cover was good for a fifteen percent increase in sales. Daly was the most popular Black Mask writer throughout the twenties.

Regarding Williams, it was really a fluke that he even made it into Black Mask. Editor George Sutton was on vacation and associate editor Harry North took the first two Williams stories, pushing Daly to finish and submit the second one before Sutton got back. Sutton returned and after the Williams stories had been printed, called Daly in and told him how bad he thought those stories were.

According to Daly, Sutton said, “I don’t like these stories – but the readers do…Write them. I don’t like them. But I’ll buy them and I’ll print them…Everyone seems to like him but me.” Now THAT is damning with faint praise!

At the end of 1934, Daly and legendary Black Mask editor Joe Shaw (who never liked Daly’s writing) had a disagreement and Daly took his typewriter to the competing Dime Detective. He wrote a few more stories for the Mask after Shaw was fired, but Daly was essentially done at Black Mask.

Daly rapidly fell out of favor in the forties and struggled to sell stories until his death in 1958. It is somewhat ironic that at the same time Daly was being shut out of the field he created, Mickey Spillane was selling millions of copies of his Mike Hammer books. 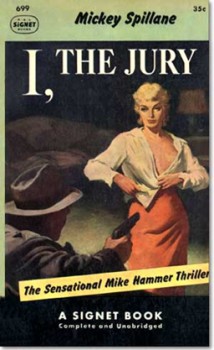 Spillane said in a letter to Daly,  “Yours was the first and only style of writing that ever influenced me in any way. Race was the model for Mike” (Hammer).

It’s no surprise the success of the Hammer books bothered Daly: “I’m broke and this guy gets rich writing about my detective.” But what Daly misses here is that Spillane mixed raw sexuality with violence in the Hammer books. It makes them a very different read than the Williams stories they otherwise emulate. Put Williams and The Flame in a torrid relationship and you’d have something a lot more like a Mike Hammer tale.

Fans like to speculate that Nero Wolfe is the offspring of Sherlock Holmes and Irene Adler (though Mycroft seems a more likely father figure). In that vein, Mike Hammer could well be the love child of Race Williams and The Flame.

Personally, neither Williams nor Hammer are high on my favorites list. I much prefer a similar detective, Hugh B. Cave’s hard drinking PI, Peter Kane.

I re-read a couple of the Williams’ novels that appeared in Dime Detective shortly after Daly left Black Mask. They are clearly better written than “Three Gun Terry,” but they are still obviously Daly.

Daly is treated largely as a footnote in the history of the hard-boiled school. Commentators feel that he must be addressed because of his spot as the originator. I’m not aware of any dedicated biography of Daly, and most of his work is out of print.

While the ebook explosion has brought a lot of hard-boiled pulp back into “print,” including contemporaries like William Campbell Gault and Frederic Nebel, I’m not aware of even one Race Williams short story collection in the electronic format. And with over sixty Williams stories out there, that seems unreasonable.

I pick up a Daly story, accepting it for what it is. And knowing I’ll need to gloss over the shortcomings. But within those constraints, I’ll get a non-stop, guns blasting hardboiled tale. And sometimes, that’s good enough.

I’ll likely do a separate post on Race Williams, with a bit of discussion on two of Daly’s other characters, Vee Williams and Satan Hall.

Daly himself was nothing like his characters, rarely leaving the confines of his house. He had no experience with crime, private eyes or the law. However, since Race Williams always wore a pair of  .45 automatics, Daly purchased one. He was arrested for carrying a concealed weapon as he took it home. That was the end of his criminal research.

We’ve got a lot more mean streets to go down.

There are some good things to read out there on the history of the hard boiled school.

I like William Nolan’s book, The Black Mask Boys, which has a nice intro on the history of Black Mask, an individual intro for each of the eight quality BM authors, and one story from each of those authors. It’s a pretty good book to have on your shelves.

A lot of Daly, particularly Williams stuff, is available on e-book. A very nice collection put together by Steve Mertz, RACE WILLIAMS’ DOUBLE DATE, is available as a traditional book (Black Dog Books). There’s also a Vee Brown collection from Altus Press. You should revisit Spillane, and/or perhaps try some of the novels of his that I have completed (most recently KILL ME, DARLING).

Bill Maynard wasn’t a fan of Nolan’s Black Mask novels in the linked post. I didn’t mind the one that I have read.

I left a comment previously, but it seems to have gotten lost. A ton of Daly is available on e-book. A fine collection edited by Steve Mertz, RACE WILLIAMS’ DOUBLE DATE, is available as a real book (Black Dog Books). There’s also a Vee Brown collection from Altus Press. You should revisit Spillane, and perhaps might enjoy trying one of the collaborative posthumous Hammer novels I’ve completed from unfinished works in Mickey’s files.

Apologies — I just found both of your comments in our spam filter, and approved them. Not sure why that happened, but now that you’ve been approved, you should be able to post normally. Sorry about that!

Hi Max. I’ve found the novels and a couple single short stories for Daly in ebook format, but have had a hard time finding collections. A ten-fifteen story Race Williams ebook seems like a no brainer.

I do have a few Daly paperback collections from Mysterious Press.

I like Hard Case’s ‘Dead Street,’ so I’m not totally opposed to Spillane. I think I have ‘Consummata’ on the shelves to be read yet.

I hope the Cinemax Quarry series is successful.

I’ll be doing a post on your Eliot Ness quartet in the future: they’re my favorites of your books.

‘It doesn’t take a genius to recognize that there are better airplanes than the ones flown by the Wright Brothers, but they were there first, assuring themselves an important place in history.

The same holds true for Carroll John Daly (1889-1958). There have been many practicioners of the hard-boiled private eye story who are far superior to Daly, but he was the first…’ – Otto Penzler from his introduction to “The Third Murderer.”

And late last year, the good folks at Altus Press put out an almost 700 page ‘Volume 1’ collection of Race Williams stories. And Altus has an impressive history of ebook releases, so that would address my comment in the post about a lack of electronic Williams short stories.
http://www.amazon.com/Them-That-Lives-Their-Guns/dp/1618272144/ref=sr_1_1?s=books&ie=UTF8&qid=1455296909&sr=1-1&keywords=carroll+john+daly

Altus is now up to volume 3 of the Race Williams collection.

[…] the editorship of George W. Sutton, with Carroll John Daly’s “Three Gun Terry” (which I wrote about here…) and “Kings of the Open Palm,” and Dashiell Hammett’s “Arson Plus,” appearing in 1923. […]