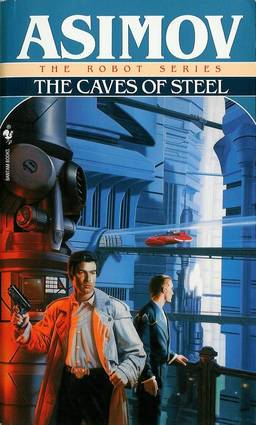 In 1953, Isaac Asimov combined the science fiction and mystery genres with a three-part serial. In The Caves of Steel, Asimov painted a bleak future for humanity that served as more than just the background of a murder investigation.

Earth became overpopulated and civilization had to adapt to the massive resource needs. Cities became densely populated collectives. Efficiency drove everything. Section units (one, two and three room apartments) rather than houses. Group eating areas, rather than individual kitchens. Common shower and bath units instead of one (or more) per family. Hundreds of miles of high-speed conveyer belts, rather than roads and cars. The ancient, underground roadways were used by official forces to fight fires, to move about to quell riots and such.

Towns and cities were absorbed by ever-growing CITIES. The huge Cities were roofed in by domes until “Outside” became a terrible place that city dwellers never went to: they stayed in their caves of steel, eating mass produced yeast and hydroponics. Direct sunlight was not experienced. As Asimov says, “There was no doubt about it: The City was the culmination of man’s mastery over the environment.”

Then the Spacers came. Man had colonized other planets but those inhabitants eventually rebelled and broke free. They then returned and easily defeated Earth’s defenses.

The Spacers lived on other planets in wide-open spaces, with many robot servants. Asimov essentially paints a picture of the rich, upper class, living indolently, and the poor, lower class, packed together like sardines.

It is also a book about prejudice. Earthmen resent Spacers, who have asserted their dominance. Militarily, they are far superior and the resentment simmers because earthmen can’t do much of anything about it. They hate robots, which are doing jobs more efficiently and causing humans to be ‘demoted’ to lower classifications and positions. Baley calls an office robot, “boy” and is rude to him. The implacable robots are emotionless and simply obey orders. Asimov was surely commenting on the racial situation in America at the time.

This book is significantly more about science fiction and Asimov’s tale of future society than it is a mystery about a murder. However, your hero has to have a goal, or what’s the point? Baley, paired up with R. Daneel Olivaw, a robot indistinguishable from a human, must discover who murdered a scientist in Space Town.

Now, this is a buddy cop novel, several decades before it became a trope for TV shows and movies. As a matter of fact, if you saw the underrated Fox television series, Almost Human in 2013, it clearly drew on The Caves of Steel. I didn’t realize this as I waswatching the series, but there can be little doubt that the creators were familiar with Caves. 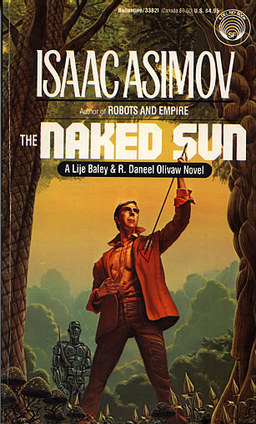 Baley makes missteps along the way: he’s not some super-intelligent private detective; he’s a hard working cop. He keeps plugging away, seemingly making little progress. In fact, his solving of the case comes across as a bit of a ‘Eureka’ moment.

Asimov wrote a guide to the Bible from a historical perspective. As an atheist, he obviously didn’t take a believer’s view of the Good Book. But he certainly knew it very well. We know Baley’s wife as Jesse, but her actual name is Jezebel. Asimov tells us a great deal of Jezebel’s story as a conversation between the two.

And unknowingly, while trying to make Jesse feel better about having the name Jezebel, he instead takes something away from her that causes a (temporary) rift in their marriage. Asimov uses his Biblical knowledge to make a point about how people can strongly identify with their names – be the relationship real or imaginary. And it’s not just fluff: he weaves it into the story.

Asimov finishes the book with another Bible reference that opens up an entire avenue of exploration regarding the “humanness” of robots.

Caves was followed three years later by The Naked Sun, when Baley was again paired with R Daneel Olivaw to investigate a murder: this time on the planet of Solaria. Nearly thirty years later, Asimov brought the two together for another case in The Robots of Dawn.

It was followed shortly afterwards by Robots and Empire, which included only Olivaw. As the title indicates, Asimov used this book to bring together aspects of his Robot and Empire series’, as well as the Foundation books. Perhaps because Baley was absent in this fourth book, it was the most unsatisfying of the series for me.

It’s Elementary – BBC Radio produced a superb Sherlock Holmes radio series starring Clive Merrison. Bert Coules was the man behind that show. He adapted Caves as a radio drama in 1989.

Peter Cushing (whom you read about here, of course!) starred in a BBC TV adaptation of Caves in 1964. Unfortunately, only clips have survived.

There are all kinds of police/private eye books out there. I’ve written about a few here at Black Gate, including Garrett, PI, Dirk Gently, Nero Wolfe, Sam Spade, Streeter, Steve Harrison, Solar Pons and of course, that Holmes fellow (use the search field for him). There are an awful lot of different eras and settings (P.N. Elrod’s Prohibition Era vampire PI series will be a post subject) for the genre. If you’re a sci-fi fan, you should go ahead and give The Caves of Steel a read. It’s not one of my favorite books, but it’s a well-written science fiction novel by a master.

The Naked Sun was also adapted by the BBC for their series Out of the Unknown. I remember seeing it way back in the 60s but I don’t think I was all that impressed. It was 1969 and I would have been 12. Unfortunately, the BBC wiped the tape so there is no way that it will ever be shown again, unless a copy is lurking in the archives of a foreign TV station! Neil

Thanks Neil. I didn’t know that the BBC did a follow up with The Naked Sun!

That BBC policy of wiping masters drives me crazy as a Sherlock Holmes fan. They lost episodes of the Douglas Wilmer/Peter Cushing series, among other stuff.

The chief reason we need to develop FTL travel is so that we can travel to a point where we can intercept & record all of those 1960s BBC broadcasts.

I get things were different back then, and expense was an issue, but this isn’t like me taping over a VHS tape with an episode of All in the Family which I recorded. We’re talking masters of productions!

[…] The Public Life of Sherlock Holmes: Asimov’s The Caves of Steel […]