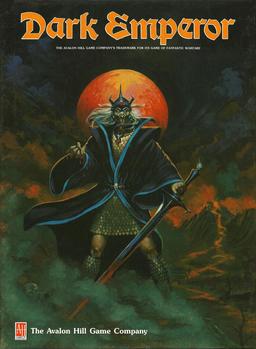 By 1985 it was pretty clear that J.R.R. Tolkien’s The Lord of the Rings was the defining fantasy of the 20th Century — and that the license was a gaming gold mine. SPI had turned it into the classic board game War of the Ring in 1977, which had gone through multiple printings and was still selling well nearly a decade later. SPI had built on the success of WotR with a small line of Tolkien-inspired games, the most ambitious of which was Greg Costikyan’s sumptuous Swords & Sorcery, in 1978.

It took a while for Avalon Hill, the undisputed king of American board games, to get into the act, but by the mid-80s they decided to enter the epic fantasy market. They’d already tried their hand with Magic Realm in 1979, and later Elric, neither of which drew on the epic good-versus-evil model of The Lord of the Rings, and neither of which had been very successful. For their next attempt they lured Greg Costikyan from West End Games, where he’d been gainfully employed since SPI had been shut down by TSR in 1982.

Costikyan, who was only 25 at the time, already had an impressive resume. He entered the industry at 14, assembling games in the shipping department at SPI. He designed his first game for SPI, Supercharge (1976), based on the First and Second Battles of Alamein during World War II, when he was 17. By 1985 his published games included Barbarian Kings (1980), Paranoia (1984), and Toon (1984), not to mention the popular microgames The Creature That Ate Sheboygan (1979), Vector 3 (1979) DeathMaze (1979), and Trailblazer (1981). Perhaps his greatest success, West End’s Star Wars RPG, was just two years in his future.

Dark Emperor, the game Costikyan designed for Avalon Hill, is a two-player boardgame that mimics Swords & Sorcery‘s dual warfare-and-quest approach. Although it lacks both the deep world-building of that game, and its numerous rich scenarios, it’s clear that Costikyan learned from the overly-ambitious design of S&S, producing a more tightly focused game. The Tolkien influence is also clear… if you want to play Sauron, striding across a fantasy land as a nigh-unstoppable Dark Lord invading from another dimension, Dark Emperor is definitely for you.

Dark Emperor invites players to play either the Necromancer Padrech dar Choim, bane of all that lives, with his vampire host and his ability to raise the undead to do his bidding, or a human king, who must rally the kingdoms of the world to fight him. Typical for Avalon Hill the game components, including the map and counters, are beautiful, and if you’re an old-school gamer like me, they look extremely inviting when you open the box. 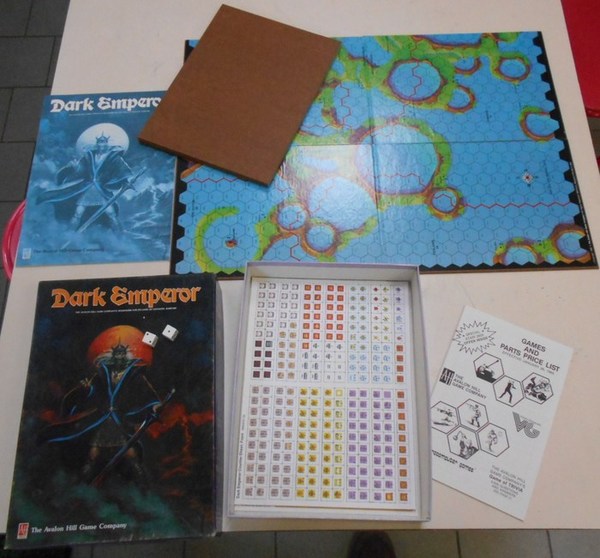 The game map, with its unique meteorite-scarred island landscape, is especially original. 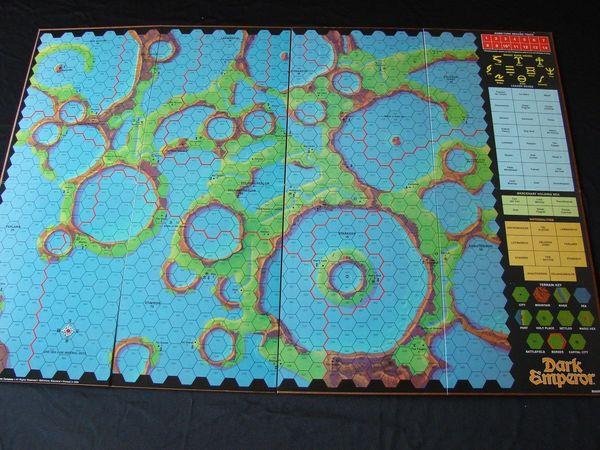 The quest portion, while not as robust as Swords & Sorcery, does bring some nice elements into the game, including magic items. Padrech is aided by the power of his Great Sword He-Sups-on-Prana, for example…. but only if he can find it.

Dark Emperor includes a 16-page rule book, 260 color counters, and a sturdy two-piece folding mapboard. I quite like Jim Talbot’s box art, even if it does look suspiciously like Elric on the cover.

Here’s the description from the back of the box.

Dark Emperor is a fantasy wargame for two players set in the unique world of Loslon. It pits the divided, but formidable, human kingdoms against the small, but powerful, forces of Padrech dar Choim.

As the Great Necromancer, you must subdue the kingdoms before they can unite to oppose you. In doing so, your first goal is to conquer two or three of the lesser kingdoms, to provide fodder for your vampiric host. Afterwards, you may march against the seat of empire and avenge yourself on the descendants of Padrom III. Losses mean nothing, victory is all. The death of your hosts holds no terror for you, for you are Padrech dar Choim, a master Necromancer who can raise the dead to do your bidding. Aided by the power of Tol Morn and Mezal, and with the Great Sword, He-Sups-On-Prana at your side (if you can find it), you know that you are invincible.

As the active leader of humanity, the Kingdoms player, you must fight a delaying action until the heroes and heroines under your command can rouse the land to fight mankind’s greatest foe. Unless these forces can be united, they will surely fall. Only together can they hope to stem the dark tide and defeat Padrech dar Choim. Cunning strategy, subtle diplomacy and heroic, tenacious defense are their only hope against this great evil. Used well, they can lead to glorious and final victory over the powers of death and terror.

Dark Emperor is a simulation of Lesion’s greatest war, encompassing all of the diplomatic, magical and military factors that were brought to bear. Its movement and attrition systems reflect the non-combat losses that occur in any war, especially in a period before the modern advances in logistics and medicine. The combat system rates the relative strengths, and the different capacities, of armies, creating a necessity for intelligent command to assure victory.

Dark Emperor can be played in two to four hours. Included in the game is a four-color mapboard, a sixteen-page rule book (with extensive historical background and designer’s notes), two hundred and sixty counters and two six-sided dice. On a scale of one (easy) to ten (hard), its complexity rating is SIX.

May the adventure within enlighten your soul.

And here’s high-res scans of both the ad in Avalon Hill’s The General magazine, and the back of the box (click for bigger versions). 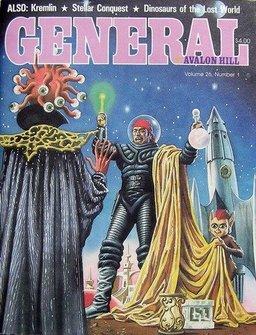 Unfortunately, Dark Emperor wasn’t very well received. It has a 5.5/10 rating at BoardGameGeek, and it never sold very well.

Even Avalon Hill eventually admitted that aspects of the game were almost unplayable. Writing in the Avalon Hill magazine The General (Volume 26 #1, 1990, see cover at right), Glen Rahman spoke pretty plainly about the game’s deficiencies:

The Avalon Hill fantasy boardgame Dark Emperor is one of the more interesting items of its ilk. The concept of an invasion of a continent by sorcerers and vampires from another plane of existance is bold and imaginative. The system of magic is intriguing and the layout of the map — a sort of moonscape with seas — is unique.

But the game is not without its problems. The movement-attrition system is almost unplayably harsh, and wins no prize for “realism.” Any expenditure of movement points subjects a stack to ruinous attrition; armies tend to waste away before they can come to grips with the enemy. Some important principles of play are left ambiguous, and the alliance system is merely a round-about method of achieving approximately the same order of battle in every game.

In the same article Rahman introduces a game variant that amends many of the problems in the standard rules, and also adds additional options that expand playability. Although I haven’t tried his variant, I have heard that it does make the game much more playable. (Download his complete article at BoardGameGeek.)

Dark Emperor was designed by Greg Costikyan and published by Avalon Hill in 1985. It is a bookcase game, with an original price of $19. The cover is by Jim Talbot.

See all of our recent game articles here.

Loved loved loved West End’s Star Wars rpg. One of the best I’ve ever played. It FELT like Star Wars. Brilliant design. Always was intrigued by Paranoia and Toon, but never had the pleasure.

You know, I’ve never tried it. But I know collectors go crazy for it… it is fondly remembered (and zealously collected) by many.