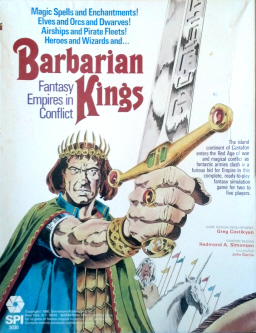 Magic Spells and Enchantments! Elves and Orcs and Dwarves! Airships and Pirate Fleets! Heroes and Wizards and… Barbarian Kings.

That’s the cover copy on the boxed version of Barbarian Kings, one of the most fascinating games from my childhood, a game clearly inspired in equal measure by Robert E. Howard and J.R.R. Tolkien. Except for the airships, which I think maybe was an attempt to throw in a little Edgar Rice Burroughs and John Carter of Mars.

My fascination didn’t stem from any virtue of the game design. In fact, I never even had the chance to play it when it was first released in 1980. But it loomed large in my imagination.

Barbarian Kings was originally published in Ares #3. I’ve mentioned Ares before — it was the short-lived (and today, highly collectible) magazine published by SPI that included a science fiction or fantasy board game in every issue.

And what games they were. Star Trader, simulating high-stakes interstellar trade, commerce, and piracy; The High Crusade, inspired by Poul Anderson’s classic novel of a medieval conquest of the galaxy; Nightmare House, which featured intrepid explorers venturing into a haunted house; Voyage of the B.S.M. Pandora, a solitaire game of interstellar exploration on savage worlds; The Omega War, simulating a post-apocalyptic battle on a war-scarred North America in 2419. And nearly a dozen others.

And in issue #3, it was Barbarian Kings, a simple but compelling game of fantasy empires in conflict for 2-5 players. The Jack Kirby-inspired art on the cover communicated just about everything you needed to know (click on the image at right for a bigger version). This was a game of empire building in a world of dwarves, orcs, and magic, just like any of a hundred fantasy novels crowding the shelves in the 70s. It was a compact theatre of the imagination that could drop you smack dab into your favorite fantasy setting and let you run rampant with an army at your back. And airships. Let’s not forget the airships.

The real appeal of Barbarians Kings (and Star Trader and The Omega War and many others) was both the flexibility and generic detail of the setting.

It’s not that there was no originality in the slender backstories they offered — the cover of Barbarian Kings, for example, blathers some nonsense about “The Island continent of Castafon enters the Red Age of war and magical conflict as fantastic armies clash in a furious bid for empire” — but seriously. I’ve never been able to successfully finish that sentence without mentally replacing it with “Take up the mantle of King Conan of Aquilonia and ride to the aid of Amalrus!” Not once.

It’s the same with The Omega War. Just take a look at the map, and tell me you don’t picture yourself taking on the road thugs in The Road Warrior with a laser tank. It’s impossible.

But that’s part of the fun. These were low-cost games that promised to let you put boots on the ground in Middle Earth, Melniboné, Hyperborea, and dozens of other popular fantasy and science fiction settings. All you needed was imagination. It was irresistible.

Barbarian King was one of the more successful of SPI’s Ares games. It was reprinted in a slender boxed edition in 1980 with identical components to the magazine version.

After SPI went bankrupt in 1982, the game remained out of print for nearly 20 years. Jolly Roger Games eventually released a deluxe edition in 2001, with revised rules and a sturdy map, replacing the cardboard counters with wood blocks.

That’s a snap of the back cover below (click on the image for a legible version). This version, you’ll notice, sheds most of the high-fantasy trappings to focus on feared necromancers, Orcish Warg riders, and warring barbarian tribes. It’s much more Robert E. Howard than J.R.R. Tolkien, which I think actually suits the game a little better. 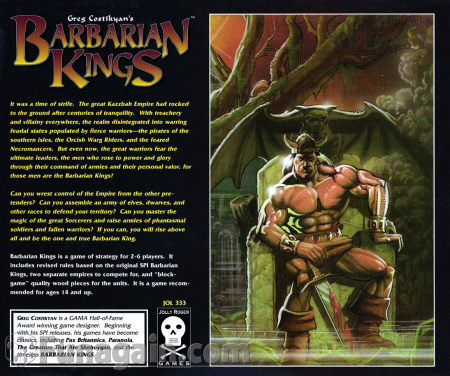 While Jolly Roger Games is still around, the revised version of Barbarian King sadly is not. It, too, has now been out of print for over a decade, and copies command truly extraordinary prices in online venues like eBay.

Fortunately, earlier editions of the game are still easy to come by, even in great condition.

If you’re looking for a deep fantasy board game with a well-thought out setting, Barbarian Kings probably isn’t going to be your thing. I suggest maybe Cyclades, A Touch of Evil, or Lords of Waterdeep.

But if you’re in the market for a fast-paced game that embraces the virtues of simplicity and imagination, you should have a look at Barbarian Kings — especially if you’re bringing a love of 1970s fantasy to the table. It’s a launching pad to more than a few realms you may be familiar with.

Here’s the complete description from the back of the boxed edition. Note the “special combat units” include warfrogs — proving there’s at least one or two original touches lurking inside.

Barbarian Kings simulates the Red Age of political and military turmoil on the island continent of Castafon; situated in the Fira Ocean of the planet Hypastia, it is a place where magic works (sometimes), and men and near-men are as treacherous and as territorial as anywhere in the Universe. From two to five players assume the roles of kings and attempt to raise human and magical armies, led by wizards and heroes, in order to conquer and consolidate control of Castafon.

Barbarian Kings is also a game of diplomacy as leaders create alliances (which may be broken at any time), collect taxes for maintenance of armies, and use their Spellcasters to attack rival heroes, magicians and armies. Rules cover hero abilities, branches of magic, special combat units (airships, warfrogs, and fleets), and neutral units. Barbarian Kings includes an 11″ x 17″ map, 100 cardboard counters, rules, and various playing aids.

Barbarian Kings was published in Ares #3 in July, 1980. It was designed by Greg Costikyan, with graphic design by Redmond A. Simonsen. The original price was $3.

Wow! I’d forgotten about this one. I never had a chance to play it, but I remember seeing it on the shelves of my early-80s gaming store. Should’ve picked it up when I had the chance.

I’ve long been a fan of SPI, and every now and then I still get a chance to play DragonQuest, SPI’s fantasy role playing game. I still prefer DQ over early editions of D&D and AD&D.

Glad to hear you’re a DQ fan! There’s been several discussions of it here recently. Howard Andrew Jones is a fan, and he’s not the only one on our staff keeping its memory alive.

[…] pages as an Ares section (see our review of issue #3 of the original magazine, featuring the game Barbarian Kings). And so it remained as an intriguing concept that simply ceased […]

[…] It included a complete SF or fantasy game in every issue, including Greg Costikyan’s classic Barbarian Kings and Citadel of Blood; The High Crusade, based on Poul Anderson’s classic novel of a stellar […]