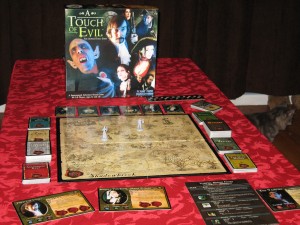 The quiet colonial hamlet of Shadowbrook is cursed by evil and you are one of the small group of people who can investigate the growing danger, discover the evil’s source, and then collect together a group of Town Elders to destroy it!

That is the premise of Flying Frog Productions’ board game A Touch of Evil (Amazon). You move through the village, exploring various locations and getting clues and equipment. Your currency in the game are Investigation points, which you can spend to learn the secrets behind the Town Elders, or to buy new equipment from the town’s blacksmith. Each round, you uncover new mysteries … many of which result in a confrontation with the foul minions of the main villain tormenting the village and bringing it more under the sway of darkness.

The victory at the end comes from purchasing a Lair card (the price of which changes as evil gains control over Shadowbrook), gathering together a group of Town Elders, and going to confront the villain. However, the Town Elders all have secrets, and if you’re not careful, those secrets could cause them to turn on you, increasing the villain’s power during the confrontation. If you fail to defeat the villain, it escapes and play continues until another player is able to trigger a confrontation. This process continues until someone succeeds at actually defeating the villain.

There are 4 options for the villain in the game, which come from classic horror archetypes: Vampire, Werewolf, Spectral Horseman, and the Scarecrow. The players choose to be one of 8 different Heroes. (My favorite is “Victor Danforth, the Playwright,” mainly because it allows me to talk the whole game in an overly-dramatic voice.)

The games can be played by 2-8 players, with a target age of 12+. Game time is 1 to 2 hours long, and I’d certainly expect early games to lean toward the upper end of this. The game I’ve played is the “Basic Game” variant, though there’s also an “Advanced Game” variant. In this version, the villain and their minions are a bit more difficult and it’s a little more challenging for heroes to gain Investigation. (Instead of just picking investigation token off the game board, the hero must complete a skill test.) These games can be played in either Competitive (the default) or Cooperative versions, or in a team-based play that mixes elements of these two styles of play. 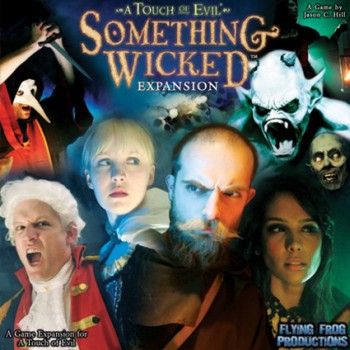 If you want to check out the rules of the game, the full rulebook is available online to read and become familiar with prior to buying the game. There’s also some great free web content – three new villains that you can download for play, once you get tired of fighting the same old monsters over and over.

Flying Frog Productions has created two full expansions, Something Wicked (Amazon) and The Coast (Amazon), which provide more play options. Both of these major expansions come with full boards that expand the gaming area, providing new regions to explore and new equipment to gain. I don’t have any of the expansions, but according to the Flying Frog Productions website, the Something Wicked expansion seems to provide some enhancements for the collaborative play variant. Since I’m often playing games with my children, any focus on cooperative play elements is something that I find encouraging. This, together with the various new villains, heroes, board locations, Town Elders, and Mystery cards included, seem like they’d add for a lot of enhanced gameplay.

Two smaller expansions – Hero Pack One (Amazon) and Hero Pack Two (Amazon) – both can be used to increase the number of heroes available in the game, such as by adding the French Foreign Diplomat (from Hero Pack Two). As an amusing side note, the actors who play these Heroes hang out at the Flying Frog Productions booth at GenCon each year, so I’ve actually met the French Foreign Diplomat.

As you can see above, the set-up of the game board can be a bit time consuming, and the rules (which, again, you can get for free online) are fairly involved. My initial reaction would be that this game isn’t right for the novice gamer, but as a Basic Game using Cooperative play, this game could probably be used to introduce more elaborate story-based gaming to a more inexperienced players. Once you get the hang of the basics, the rounds move pretty quickly (although the game itself can still take a while).

Disclaimer: A complimentary copy of A Touch of Evil was provided by the manufacturer for review purposes.

[…] Touch of Evil: Colonial Gothic Horror Board Gaming At Its Finest […]

[…] out setting, Barbarian Kings probably isn’t going to be your thing. I suggest maybe Cyclades, A Touch of Evil, or Lords of […]

[…] A Touch of Evil: Colonial Gothic Horror Board Gaming at Its Finest […]