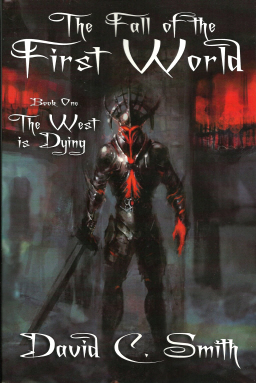 Thursday I had the pleasure of attending a reading by the distinguished David C. Smith here in Chicago.

Dave’s accomplishments in the field of modern sword & sorcery are legendary. With Richard L. Tierney, he published the Bran Mak Morn novel, For the Witch of the Mists (1978), and six volumes in the Red Sonja series from 1981 to 1983. He wrote one other novel based on the works of Robert E. Howard: The Witch of the Indies (1977), featuring the pirate Black Terence Vulmea.

On his own, Dave produced the highly-regarded story cycle set on the imaginary island-continent Attluma, beginning with Oron (1978) and The Sorcerer’s Shadow (1978). All told, the Tales of Attluma include five novels and eighteen short stories and novelettes written between 1971–1984. In total, Dave has written twenty-one novels in a career spanning over three decades and still going strong — including the occult thriller Call of Shadows, released by Airship 27 in March of this year.

Dave entertained the audience with tales of the heady days of his early career, when young writers named Karl Edward Wagner, David Drake, Richard L. Tierney, and Charles R. Saunders were breathing new life into sword & sorcery — and when he shared an agent with Wagner, Frank Herbert, and an up-and-coming young horror writer named Stephen King.

But the highlight of the reading was the excerpt from The West is Dying, the first volume in The Fall of the First World, a fantasy trilogy originally published in paperback by Pinnacle Books in 1983. Unavailable for nearly thirty years, these exciting volumes are finally being returned to print by Borgo Press. A fantasy version of War and Peace, the saga follows the conflict between two great empires, bringing together legendary historical characters and Western myths including the tale of Helen of Troy. As a king offers his beautiful daughter as a prize, another pursues only endless war… and so the First World begins to collapse.

The West is Dying was published by Borgo Press on November 29, 2012. It is 422 pages in trade paperback priced at $19.99. The cover art is by Dusan Kostic. It is available directly from Borgo Press or through Amazon.com, Barnes & Noble, and other fine retailers.

[…] one of the most popular articles on the Black Gate blog last year. We featured David’s The Fall of the First World in December, and posted the complete text of Joe’s Dorgo the Dowser novella “The Moonstones […]

[…] thirty years, these exciting novels are finally being returned to print by Borgo Press. The first, The West is Dying, appeared in November, and now we’re very pleased to see that volume two, Sorrowing […]