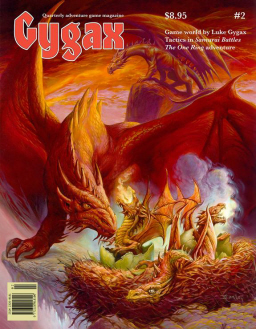 The second issue of Gygax magazine is now at the printer and will ship in time for Gen Con.

We’ve been anxiously (and impatiently) awaiting the second issue of Gygax. I reviewed the fabulous first issue back in March and thought it was entirely successful at capturing the spirit of the earliest days of role playing, particularly the first issues of The Dragon, the magazine that shaped and guided the industry in the mid-1970s.

Gygax is a “quarterly adventure role-playing aid” that seems to be sticking more closely to an annual publishing schedule. As that sounds eerily similar to the eventual schedule for the print version of my own magazine, Black Gate, I’m just going to keep my mouth shut and not throw stones.

What I am going to do is peer closely at the pic of the Table of Contents recently published at the MTV Geek and see what I can make out. Looks like Tim Kask has an article on Tactics in Samurai Battles, Joy Libby looks at Hitchhiking in Doctor Who, Bryan Pope (Pipe? Page?) examines Building a Winning Spellbook for Mage Wars, and Vincent Flavio looks at The Old-School Renaissance.

That’s about all I could get before my eyes gave out. I’ll have to wait for the print version to discover the rest. For now, I’ll enjoy that tantalizing Jeff Easley cover and keep an eye on the magazine stand at my local game shop.

And I’m now in charge of all art for the magazine 🙂 Mwahaahahaha! What have you unleashed on the gaming community, O’Neill? Little did you realize this is where your apprentice would land in 2013!

I thoroughly enjoyed the first issue. Looking forward to getting this one as well!

Congratulations Scott! That’s great news! The art in issue #1 was one of the many bright spots — I’m sure it’ll be even better and more varied under your tenure.

[…] reviewed the first issue last March, and I was very impressed. Issue #2 was released in time for Gen Con, and I’ve been anxiously awaiting the third issue for some […]