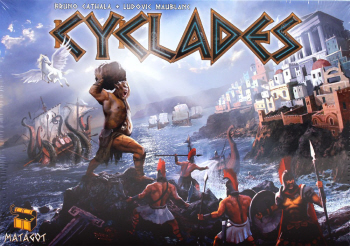 I saw the original release of Clash of the Titans, starring Laurence Olivier and Maggie Smith, on opening night in 1981. As just about anyone who’s seen it can tell you, it’s not a very good movie, with a painfully flat performance by Harry Hamlin as Perseus and clumsy attempts to add kid appeal with a nonsensical robot owl.

In the middle of a tale involving Pegasus, three blind witches, Medusa, and the Kraken, Hollywood feels the need to add a robot owl. I mean, come on.

But it didn’t matter. I loved it with a wild passion, and it ignited an intense interest in Ancient Greece in me.

I read everything I could get my hands on, from Homer to Aeschylus, Euripides to Aristophanes. I visited the library and asked to see maps of ancient Athens, circa 500 B.C. And I scrapped our ongoing D&D campaign, set in a generic medieval landscape, and told my bemused players we’d be starting over in Athens, at the height of the Bronze Age.

I discovered the history of the Cyclades, the tight knot of islands off the coast of Greece, that I learned had been packed with tiny civilizations and numerous isolated cultures over the centuries. It was a perfect setting for a fantasy game: a maze of islands thick with myth and mystery, a stone’s throw from the great city states that birthed modern civilization. The D&D campaign that began there carried on for over a decade, and was easily the most successful and rewarding one I’ve ever played.

But I always wondered why I didn’t see the setting used more often. So you can imagine how I felt when the fantasy board game Cyclades was released in 2009. I bought a copy last month, and so far I’ve been very pleased with it.

Before you ask: yes, the game has all the elements you expect. The gods of Ancient Greece — Ares, Poseidon, Athena, Zeus, and Apollo — are all here, and their gifts are available to those who please them. Ares assists you to raise an army; Poseidon helps you gather a mighty navy; and Athena, Zeus, and the others have their own unique ways to influence events. 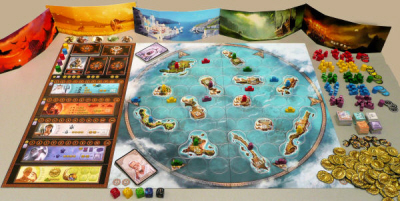 The famous creatures of mythology are here as well, including the Cyclops, Pegasus, and Medusa. And yes, even the Kraken (is there a single person who lifted a copy of Cyclades and didn’t check to see if the Kraken was included?)

In terms of gameplay, Cyclades is sort of a hybrid. In one sense, it’s a Civ-like city-building game, since to win, players must build a certain number of Metropolises.

It has both land and sea battles, but isn’t really a wargame. Players bid for the services of the gods, but it’s not an auction game. As others have noted, it has elements of Euro-style games, like area control and bidding, but also has lots of plastic miniatures (95!) and dice, which is more typical of American games.

The board is beautiful, and I dearly wish I’d had it 25 years ago when I was shepherding my players through the twisty maze of islands of the  Cyclades. It’s printed on both sides, and which one you use depends on the number of players. All the components, in fact — including the cards and tokens — are fairly high quality. The miniatures aren’t painted, but that’s to be expected. 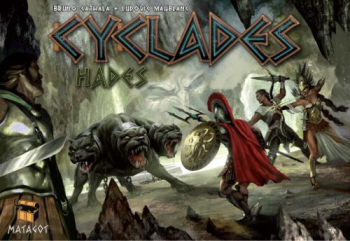 The rulebook is pretty slim (8 pages, with two devoted to set-up instructions). If you’ve played strategy board games before, you’ll have no problem following the instructions and getting underway. The game is suitable for 2-5 players, and games take between 60 and 90 minutes for experienced players.

One expansion pack, Cyclades: Hades, was released in 2011. It introduces Hades, the god of hell, and his ghost ships and powerful undead phalanxes.

I haven’t purchased it yet, but it looks like a fetching expansion, with new modules which can be incorporated into the basic game. The box contains 22 new tiles, including a Necropolis building ship, 30 cards (new heroes, magic items, and mythological creatures), 17 plastic figures (undead troops, undead fleets, hero figurines, and a Cerberus figurine), plus a rulebook.

I haven’t mastered Cyclades yet, but I’m very impressed with what I’ve seen so far. If you’re looking to recapture some of the magic and excitement of the Classical Age of Greece in a board game, it might be exactly what you’ve been looking for.

Cyclades was designed by Matagot, and is distributed by Asmodee. It was released in 2009. It is a hefty game (nearly five pounds), and retails for around $63.

Looks very interesting, the kind of think my kids may love to play. What i like about playing ancient earth is the “gazetteers” are easily available, one can pick up The Aenid or The Oddessey etc anywhere:)

I see it has a rating of 7.341 at Board Game Geek, which considering the awesome Command and Colors:Ancients gets 7.65 is high praize indeed.

If you are a RuneQuest / BRP fan there was a dowloadable game called Warlords of Alexandria that was very good at setting the scene for a brnze age campaign.Thats if yuocan find it, the link at Alt Earth seems to be dead…
http://www.soltakss.com/alternateearthrq/AELinks.html

Thanks – I wasn’t aware of WARLORDS OF ALEXANDRIA, but I’ll keep an eye out for it.

I had two major RPG resources I drew on for my campaign in Ancient Greece. One was a very early (1979) RPG from Chaosium set in the Heroic Age of Ancient Greece, RAIDERS AND TRADERS. Honestly I didn’t use much of it except the map… but the map was glorious, with the Cyclades smack dab in the middle:

The other was a much more elaborate effort from Task Force Games, HEROES OF OLYMPUS, released in 1981:

HEROES OF OLYMPUS was a fun game, and Task Force supported it for a while (there were at least two editions), but copies are hard to come across today. I used it mostly for the monster listings, which were well-researched and perfect for my needs.

[…] out setting, Barbarian Kings probably isn’t going to be your thing. I suggest maybe Cyclades, A Touch of Evil, or Lords of […]

[…] unusual for a single grand quest to start in Athens, lead to the scattered islands of the Cyclades, into the underwater gladiatorial pits of the deadly sahuagin, to the Elemental Plane of Ice and […]