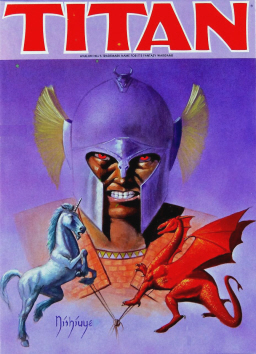 Titan was first published in an ultra-rare first edition in 1980 by tiny Gorgonstar, Inc. It was later made a hit by Avalon Hill, and remained in print for nearly two decades until Avalon Hill was sold and ceased operations in 1998. After that, copies of the most popular fantasy board game of the 80s and 90s gradually became harder and harder to find.

I remember getting my boys excited about Titan by nostalgically telling tales of epic battles between behemoths, dragons, and trolls. They clamored to play it.

I’d never owned Titan, but that’s not a problem in the age of the Internet. I found a pristine copy on eBay and hung on during a spirited bidding war. 90 bucks later, it was on my kitchen table.

Still in the shrink wrap.

It was perfectly preserved. My boys stood at my side, ready to go, anxious to throw down some dice, and experience some of that legendary Titan action. To shred the shrink and punch out counter sheets that had staunchly stood fast for over twenty years. My hands gripped the game, hesitating.

I couldn’t do it.

I apologized to my boys, told them I’d find another copy, and put that one in the Cave of Wonders, next to Dragon Pass, Dark Emperor, Wizards, Elric, Magic Realm, and other Avalon Hill fantasy games.

Back to eBay. I was a little more savvy this time. I hunted around, took my time, set myself limits.

Another copy in beautiful shape came up. Bidding was lively. I was resolute. Soon, it was on our kitchen table.

Still in the shrink wrap. 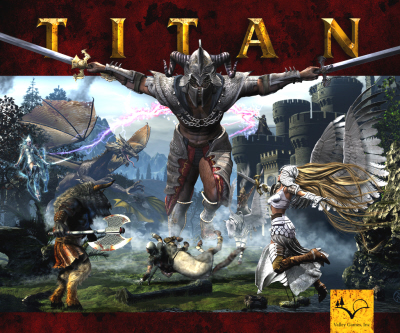 “There’s something wrong with you,” my wife said, watching me put this one next to the first. My boys looked on, dejected.

“I can’t open a game that’s been in the shrink wrap for twenty years!” I explained. “There are only a handful left in this condition. Someone has carefully preserved it, passed it along to me with love and a sense of shared duty.”

“With a sense that you’re an idiot,” Alice muttered. “Isn’t there a new copy you can buy?”

As it turns out, I was only partially right. Canadian publisher Valley Games acquired the rights and brought the game back into print in 2008. The new version, with artwork by Kurt Miller and Mike Doyle, is a deluxe edition with premium components, including a beautiful color rule book, hard folding maps, and dozens of color counters printed on heavy cardboard stock.

Heavy, in fact, is perhaps the best descriptor. The game weighs nearly eight pounds, and the contents barely fit into the huge 10 x 12 inch box.

I ordered a copy of the Valley Games edition a few weeks ago, and have been very impressed. Produced by folks who obviously really love the game, they have pulled out all the stops to  produce the ultimate version. I’m looking forward to finally teaching my boys how to play.

Just not with this copy. It’s still in the shrink.

I’ve been there, too. I found in my parents’ basement good old Heroquest with all extensions. The extensions were still shrink wrapped, the main game was without the wrap but otherwise untouched (figures still attached to those plastic thingies etc.). I got those for christmas as a kid, but me and everyone in the family forgot about them. No idea why. Now, on the one hand i’m dying to see what’s inside those extensions. On the other hand… shrink wrapped, prime condition, rare, possible valuable, noone to play with…

Yeah, there’s something wrong with you. 🙂

I’ve played one game of Titan. Three players, six hours. I won. I was told it had been a pretty short game, so I retired with a perfect record.

That’s quite a find! HeroQuest is a highly prized collectible. I discovered it by playing the Amiga game waaay back in 1991. I eventually bought the board game, but I never bothered to track down the expansions.

I wish I had! They’re almost impossible to find, and command very high prices in almost any condition these days.

> I’ve played one game of Titan. Three players, six hours. I won. I was told it had been a pretty short game

Six hours? Wow. I don’t remember games taking that long… but then again, it was a long time ago. 🙂

You know, John, for the cost of the game plus a small service fee, I’d order you a copy, remove the shrink wrap, and forward a freshly defiled copy to you. Sounds like your sons might appreciate it 😉

My sons might appreciate it, but it would give me hives! 🙂

[…] Of course, just because Elric hasn’t been made into a Peter Jackson trilogy doesn’t been he’s been completely ignored. Maybe there hasn’t been a Hasbro action figure, or Saturday morning cartoon, or feature film — but who needs all that stuff when you can play a board game by Avalon Hill, publishers of Magic Realm and Titan? […]