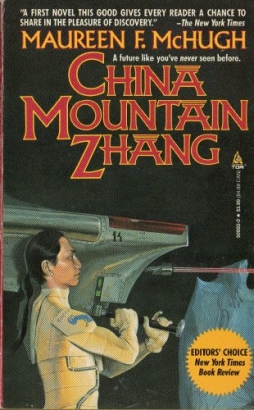 There’s a distinctive kind of surprise some science fiction books can generate: surprise that a book which seems to be speaking to the beliefs, fears, or world-view of a given time was in fact written well beforehand. I remember being taken aback, for example, that A Clockwork Orange was first published in 1962, before hippies and punks and the coining of ‘generation gap’ (first recorded 1967). And it’s interesting to me that Maureen F. McHugh’s China Mountain Zhang, published in 1992, calmly and thoroughly imagines a future dominated by China — something much discussed today, but a less common idea before the turn of the millennium. McHugh’s book is a twentieth century novel, lacking a world wide web or smartphones, that speaks to the twenty-first.

It does so because it’s a very strong book. And because the world it imagines is credible; the setting doesn’t seem a product of the anxiety of an ebbing imperial power, but a depiction of life as it is lived in the future. Characters go about their business, negotiating with the structures of their society as we do ours. We recognise them, and what they do, and their attempts to plan out their lives. As in much of the best science fiction, the imagined society’s complex and deeply imagined, existing in a dynamic relationship with character; it’s realistic, but not mimetic, and uses both its differences and similarities to the world we know as a way of getting at its thematic interest.

The book’s made up of long chapters that have the shape of short stories. Most follow an engineer surnamed Zhang, whose given names are ‘Rafael’ and ‘Zhong Shan,’ the latter of which can be translated ‘China Mountain.’ We follow Zhang as he finds his way to a career and builds a life for himself, a task complicated by ethnicity and sexual orientation. In and around the chapters dealing with Zhang are stories following other characters, minor figures in his life who broaden the story and add depth to the novel’s setting and structure. One of the metaphors that emerges in the book is chaos theory, and the now-familiar image of the butterfly fluttering its wings and causing a hurricane on the far side of the world; so these characters help demonstrate the interconnectedness of the world, affecting each other slightly or significantly, a structural embodiment of the chaos imagery. 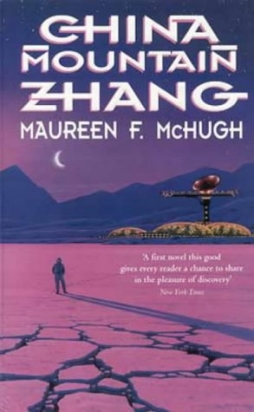 Chaos can be seen as a negation of an imperial worldview, the denial of a single focus to power. And this is a book very aware of colonialism, of the tension between the centre, the metropole, and the various peripheries. The nature of chaos is to eliminate distinctions between centre and periphery, to insist on their interconnectedness and interdependence. It is false to say simply that what happens in the centre affects the periphery; what happens in the periphery, even so far away as a colony on Mars, can, however indirectly or unexpectedly, shape the centre. But even to think in these terms is an abstraction. People move back and forth from centre to edge and the reverse, as they like or as circumstances dictate. And primarily this is a novel about people.

The characters of China Mountain Zhang negotiate their positions within society. Zhang has to find the right path, through education and non-ideal jobs. Other characters form unexpected alliances or even undergo surgery to better fit the role they want for themselves, or the role that seems to be dictated to them: to work the give-and-take of what they want and what is open to them. Zhang’s story is perhaps more complicated than most others, as he is gay in a homophobic society and, although appearing Chinese, is of mixed ethnicity. The hierarchies and ideologies around him affect the choices he makes and his ability as an American Born Chinese to find his way to the political centre of his world. Ironically, it’s by taking a job on the far periphery of society, Baffin Island, that he eventually gains access to the Chinese education he wants; to reach the centre he has to go out to the edge. He starts his time on Baffin Island dismissive of surroundings, arrogantly aware of his own privileged position — but if that never entirely subsides, it is still his experiences there that help him succeed later, that provide a basis for his later art.

This comes across through McHugh’s precise, focused prose. Consider the following paragraphs, from early in Zhang’s story, as he listens to a political discussion in a friend’s home:

I feel inadequate. I know that politics is important, I just don’t like to think about it. I don’t know what my opinions are, I just know that very little I hear ever seems to have much to do with me, or with my life.

This apartment is the apartment of a serious person. Disordered, but in a serious way — a large system on the wall, equipped for information and music, but no vid. There are flimsies in a stack on the floor, obviously downloaded. The wall at the back has home-made bookshelves filled with books and stacks of flimsies in binders. The books look like non-fiction. I used to read a lot during my alienated adolescence. Fiction. There is a book lying on the floor near Gu’s chair, The Social Matrix: Religious Communities in Capitalist America.

The easy movement from internal emotion to external observation is perfect: Zhang feels uncomfortable, inadequate, so focuses his attention on the environment around him. But both the inside and the outside are described simply and directly. We find about both Zhang and the owner of the apartment, who they are and how they relate to the world. The character-revealing description comes in a distinctly science fictional way, with a vocabulary of ‘vid’ and ‘flimsies,’ so that the setting’s built along with character. McHugh understands that a character is inseparable from their society, from the context in which they are to be imagined as having grown. 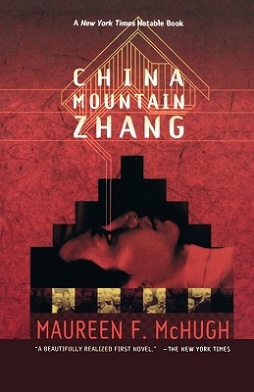 In a way, you could look at the book as a kind of science-fictional play with socialist realism. Zhang learns about a kind of ‘Daoist engineering’ in the book, and it’s tempting to associate that with the phrase “engineers of the human soul” — a phrase Stalin used to refer to writers, but which in China refers to teachers. Zhang becomes a teacher by the end of the book, but ironically his first lesson ends up casting doubt on Marxist historical determinism, bringing the chaos imagery into the book. Determinism is undermined; as monolithic imperial power is undermined; as realism is undermined by the nature of science fiction.

There’s no doubt that the book’s a great example of what science fiction does well, and perhaps uniquely. Science and technology shape the characters, as does the future setting, which is in turn inextricable from the technology. The character work is particularly subtle; McHugh tends to avoid building to clear epiphanies, instead allowing points of change to develop out of her narrative at key points. They might pass unnoticed as you read them, but as a chapter ends, or when the book as a whole ends, you can look back and see their importance: you can see how a flier, a star athlete in dangerous aerial races, becomes a different person in the course of a race (or at least demonstrates her change). You can see how the technology she uses makes the point.

It all fits with the use of chaos, with science as thematic core. Character is recognisable. Society is different. We can read the world through the people, and if that’s not entirely unusual in science fiction, I find it works here more than in most futuristic sf. The structure reflects a profound sense of character, of how a person is shaped by multiple stresses and subtle interactions. And how these things may be a function of misunderstandings; how any given person’s background may lead to a misreading of another person. 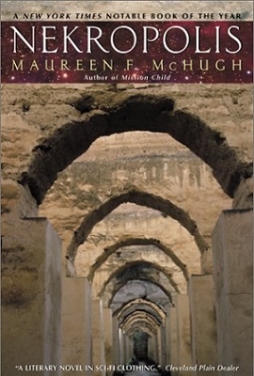 Signs and symbols in the book have varying meaning. In Western cultures, Zhang observes, white is a colour for weddings; in the East, it’s for funerals. What he does not say, but is nevertheless clear, is that in the North it means other things: both ice and the glow of dawn after a long winter. How you look at the colour depends on what you want to read into it. How you look at a person and their behaviour may depend on what you’re looking for without knowing it: a young woman sent on a blind date with Zhang is conscious of her facial deformity, and reads his disinterest in that light rather than as a function of his homosexuality. Two characters on Mars meet and slowly come to establish a relationship based on their needs and wants: and work out, through talk and action, a lasting connection.

So one of the most impressive aspects of the book is the way it handles language, and who speaks what language, and how well. In a novel that’s aware of culture and imperialism, that to me was one of the strongest elements. On the one hand, one can argue that people on the ‘periphery’ often spend less time thinking of the ‘metropole’ than the metropole imagines; on the other hand, language and culture are intricately related, and the way a given language can allow access to various discourses that shape a world is no small thing. Speaking the right way is a key point in the book, being fluent in a language or else using words or phrases of another language in a kind of low-level defiance of social norms. That social awareness of language use is important, I think, as even within a language forms of conversation are seen to be a function of social background: the first scene is a talk between Zhang and his boss at work, largely shaped by the conventions of a specific culture, of which Zhang is keenly aware.

My copy of the book has a quote from Norman Spinrad saying that “despite its masterful wealth of cultural detail, China Mountain Zhang is not a political novel.” I can both agree and disagree with that. For all its wisdom about the nature of empires, I don’t think this is a book primarily concerned with issues of capitalism versus communism, or nation versus nation. There is a detailed background leading up to the book’s present, and we do ultimately get as much information as we need to understand what happened and why, but the specifics aren’t really the point. So in that sense, I think Spinrad’s right. I think he’s wrong in that the cultural detail is itself a facet of political reality. Politics, broadly defined, is not just about governance, but about the interaction of human beings. And that I think is something at the heart of the book: the chaos of human affairs.

I read China Mountain Zhang when it fist came out, and it’s still on my shelves. Thanks for shining a spot light on it.

Sounds very interesting. I just purchased the Kindle version, which is fairly inexpensive ($8.89), as well as Nekropolis (only 99 cents!) and her two short story collections.