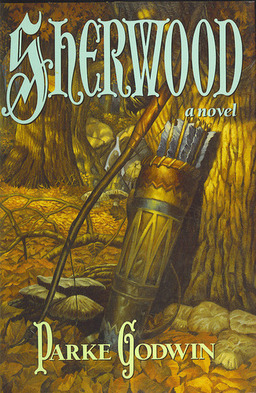 Parke Godwin, the American author of more than a dozen fantasy novels, died this week.

I first encountered Godwin with The Masters of Solitude, his 1978 science fiction collaboration with Weird Tales editor Marvin Kaye. They wrote one sequel, Wintermind (1982), and one horror novel together: A Cold Blue Light (1983).

But I’ll chiefly remember Godwin for my favorite Robin Hood adaptation, Sherwood, published in hardcover by William Morrow & Co. in August 1991. The novel follows young Edward Aelredson, Thane of Denby, who’s driven from his home by Norman invaders and takes refuge in primeval Sherwood forest — where he meets a surprising cast of characters and gradually becomes a thorn in the side of the usurping king. Set during the Norman conquest, Sherwood features both William the Conqueror and William Rufus as major characters. Godwin wrote one sequel, Robin and the King, in 1993.

Sherwood was perhaps his most successful book, but he’s also fondly remembered for his Arthurian trilogy set in 5th century Britain during the collapse of the Roman empire: Firelord (1980), Beloved Exile (1984), and The Last Rainbow (1985).

Godwin’s first novel was Darker Places (1973), his last was Prince of Nowhere, published in 2011. In between, he wrote a number of popular historical and romantic fantasies, including A Truce with Time (1988), The Tower of Beowulf (1995), and Lord of Sunset (1998). He also turned his hand to solo science fiction with Limbo Search (1995) and the humorous Snake Oil series: Waiting for the Galactic Bus (1988) and The Snake Oil Wars (1989).

As an editor he produced Invitation to Camelot (1988) and, with Marvin Kaye, one collection of Weird Tales reprints, Weird Tales: The Magazine That Never Dies (1988). He had one short story collection, the Hugo-nominated The Fire When It Comes (1984), which included the World Fantasy Award-winning title story.

Parke Godwin was born in New York City in 1929, and lived there much of his life. He died on Wednesday at the age of 84.

According to the notice just up today at Locus Online, his literary executor, Connor Cochran, says Godwin had finished three more novels before his death, and there will be a comprehensive collection to follow as well.

I’ll be looking for them.

Sad to hear. I loved Sherwood. What struck me about it is how he managed to make the conflict cultural, rather than just a straight up good guy vs. bad guy thing. That had a real impression on me when I read it all those years ago. I have a mass market copy of it here; I need to re-read it.

Wednesday was a tough day. That’s the same day James Gandolfini died. My wife and I also took in our 19yo Jack Russell terrier to be put down that day. That was friggin’ brutal, frankly.

> Godwin had finished three more novels before his death

> and there will be a comprehensive collection to follow as well.

Excellent! I recently tracked down a copy of THE FIRE WHEN IT COMES, but it’s a fairly slender collection. Looking forward to seeing a more comprehensive one. Do you know who’s publishing it?

> What struck me about it is how he managed to make the conflict cultural, rather than just a straight up good guy vs. bad guy thing.

Well said. I remember being immediately impressed with the both characters, and the rich background.

> I have a mass market copy of it here; I need to re-read it.

I found Godwin’s books rewarded re-reading (although perhaps that’s just because it frequently took me several chapters to figure out what was going on!)