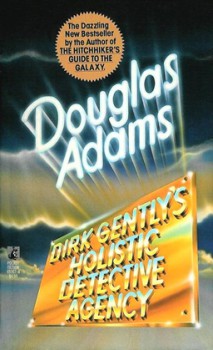 The plan is to go non-Holmes every fourth post or so, just to mix it up a bit.  So, today, we move over to the mystery field. Well, sort of…

Race Williams, Sam Spade, Philip Marlowe, Peter Kane, Max Thursday, Lew Archer, Travis McGee, Dave Robicheaux: the list of accomplished private eyes is a long one. And of course, Sherlock Holmes was the first professional consulting detective. But there has only been one holistic detective. Dirk Gently.

It’s hard to imagine a better science fiction parody than Douglas Adams’s marvelous Hitchhiker’s Guide to the Galaxy series. Five books (plus one short story and an authorized sequel), they are the standard.

Adams’s brilliance was equally on display when he tackled the private eye genre with Dirk Gently’s Holistic Detective Agency.

If you’ve read any of the Hitchhiker’s books, you know that Adams was not your typical writer. Gently, though mentioned earlier, does not appear until page 114. In fact, the main character is really Richard MacDuff, though Gently is certainly at the center of things. 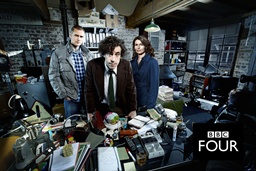 What is a holistic detective, you ask?

As Gently explains to a client, “The term ‘holistic’ refers to my conviction that what we are concerned with here is the fundamental interconnectedness of all things. I do not concern myself with such petty things as fingerprint powder, telltale pieces of pocket fluff and inane footprints. I see the solution to each problem as being detectable in the pattern and web of the whole. The connections between causes and effects are often much more subtle and complex than we with our rough and ready understanding of the physical world might naturally suppose.”

Sounds like a lot of rigmarole, eh? Gently’s attempts to get little old ladies to pay his outrageous bills for trying to find their lost cats (a trip to the Bahamas? Charging them for ‘struggling on in the face of draining skepticism from the client’) elicits chuckles. I look forward to his phone calls from Mrs. Sauskind. 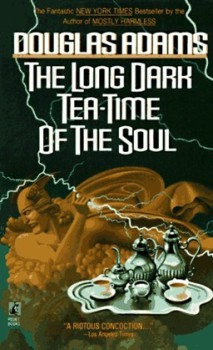 While he does seem to be a con artist, there is some sort of method to his madness as a detective.

Samuel Coleridge Taylor and Kubla Kahn, an electric monk who believes in things so you don’t have to, a Regius Professor of Chronology, dodo birds, an immovable couch and a spreadsheet program that is basically a symphony: not too many folks could build a mystery story the way Adams does.

Dirk Gently’s Holistic Detective Agency is as enjoyable a private eye romp as you will ever read. Adams himself did an unabridged reading and there’s a BBC radio drama, as well as a television series.

Adams wrote the brilliantly titled sequel, The Long Dark Tea Time of the Soul. Thor, Odin, a deal with the devil for a hit record, an obsessed eagle, a cheap overpriced electronic I Ching calculator that can only compute up to “4”: it’s more of what you liked about the first book.

When Gently walks away with a newspaper, the vendor says, “I expect you’ll be wanting to pay for that paper, then…?”

The reply is classic Gently. “Ah, Bates. You and your expectations. Always expecting this and expecting that. May I recommend serenity to you? A life that is burdened with expectations is a heavy life. Its fruit is sorrow and disappointment. Learn to be one with the joy of the moment.”

Gently gives him (yet another) IOU and keeps the man’s pen. 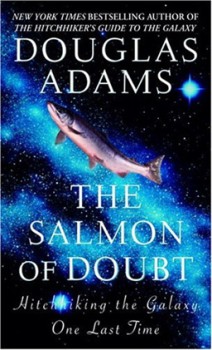 Adams died before he completed a third Gently book. The chapters he did write were assembled into an incomplete tale and included in a collection of pieces Adams wrote about various things. That collection, as well as the Gently story, is called The Salmon of Doubt.

It’s a bit odd and I couldn’t figure out where he was going with it.

If you enjoy Adams’s Hitchhiker books, or Terry Pratchett’s Discworld chronicles, you’re going to like Dirk Gently. Like Pratchett, Adams is a satirist on the level of Voltaire and you’re going to get a lot of humorous observations in a Gently book. Some are particularly British, but they still work for Americans (like me).

After an explosion at an airport, Adams types, “The usual people tried to claim responsibility. First the IRA, then the PLO and the Gas Board.” He then makes fun of the nuclear industry.

I’ve recommended a lot of crime/police/detective books over the years, but Dirk Gently’s Holistic Detective Agency is a one of a kind gem.

It’s quite possible I will look at the first Dirk Gently  book in depth over a couple of posts (something like William Patrick Maynard’s examination of the Fu Manchu novels) in the future. Be warned: there will be spoilers!

Click here to read about the craptacular 2016 TV series, which was an abomination to Adams’ memory.

I mentioned Terry Pratchett. I am an unabashed fan of his Discworld series. They are marvelous parodies of the fantasy genre. The man is laugh-out-loud funny.

Of note are his “The Watch” entries in the series. They focus around Sam Vimes and his city watch. It’s not blatantly obvious in the first few books, but they are actually police procedurals. And brilliant, hilarious ones. Vimes is a hard working cop in the classic mold.

I enjoyed DGHDA the first time around but the second time even more so knowing it was a reworked version of Adams’s unproduced script of Shada for Doctor Who. I could easily hear the Fourth Doctor saying many of the lines.

Tea-Time is darker in tone but has a smoother, more polished structure. I liked it better.

I always wondered if he had planned more in the series. Adams died too young, in a fashion only he could truly appreciate.

@Jackson – I think it said in the Salmon of Doubt (book, not story) that Adams wrestled with that third Gently story for ten years and still hadn’t figured it out.

BTW, the best part of Salmon (book) is the rest of it. Articles he wrote, speeches, etc. It’s not all good, but lots of it is distinctly Adams, and that’s fun to read.

I didn’t know that book started out as a Dr. Who script. I may reread it now just to enjoy casting Tom Baker as Dirk Gently. I’m showing my age, but Tom Baker will always be The One True Doctor for me.

I think about that I Ching calculator every time I hear mention of irrational numbers. I seem to recall that any number higher than 4 produced an answer of “a suffusion of yellow.”

@Sarah – Did you know that after Baker took off the scarf, the BBC asked him what he wanted to do next. And he replied that he wanted to make a Sherlock Holmes film. Thus, he appeared in a four part mini-series of The Hound of the Baskervilles in 1982.

Baker did an excellent job, though he had a weak supporting cast and a dull script. It wasn’t a memorable Hound and Baker’s hopes to make more Holmes movies were dashed. He could have gone directly from success as one British tv icon to another.

[…] excellent private eye novel, Dirk Gently, Holistic Detective. You can read the whole thing over at Black Gate, but here’s the […]

Another Gently post – this one on the 2012 BBC miniseries starring Houdini and Doyle’s Stephen Magnan.

The new BBC Dirk Gently miniseries is a giant pile of refuse. Has virtually nothing to do with Adams’ character and comes across as a bad Tarentino film. Complete rubbish that the Adams Estate never should have approved.

I’m working on a BG post about it, but stay as far away as you can. The Stephen Magnon series I mentioned two comments above is definitely better.

[…] If you read my weekly column over at BlackGate.com, you are probably aware that I am a huge fan of Douglas Adams. While I really like The Hitchhiker’s Guide books, Dirk Gently’s Holistic Detective Agency is my favorite. […]