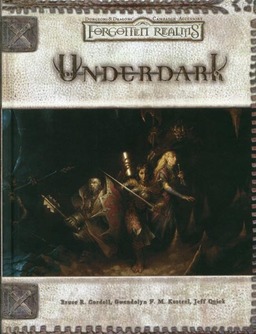 I’ve been fascinated with underground gaming ever since I took my first steps in Gary Gygax’s imaginative underworld in the classic 1978 AD&D module D1: Descent into the Depths of the Earth. That adventure — which first introduced the complex and sinister machinations of the drow — was one of the most popular ever released for AD&D and it has been much copied and imitated over the decades since.

A message not lost on TSR and WotC over the years, who have explored and expanded on Gygax’s concept of ancient and hostile subterranean civilizations in several releases — especially the popular Underdark products. With the publication of D&D Third Edition, the masterminds at WotC commissioned an updated version of Underdark for their Forgotten Realms setting, and it appeared in hardcover in 2003.

All of which is background to explain why I was sitting in the front row at the Spring Games Plus Auction and nimbling up my bidding arm when I saw a brand new copy of Underdark make its way to the auction block.

Bidding opened at a buck and was never very enthusiastic. D&D supplements one or two editions out of date don’t seem to command much interest these days and I walked away with it for the criminal price of seven bucks.

Their loss. Underdark is a terrific buy for any D&D gamers looking to add a fully fleshed-out subterranean setting to their existing campaign.

Forgotten Realms: Underdark contains a 16-page chapter on races which covers all those you’d expect — including drow, duergar, grimlocks, and kuo-toa — as well as lesser-known Underdark inhabitants like the spiderlike chitines, former drow slaves who won their independence in the Year of the Creeping Fang; the once-human deep Imaskari, last survivors of long-forgotten Imaskar who fled the apocalyptic collapse of their ancient empire; the planetouched gloamings, compulsive travelers through the Underdark; the shape-changing, long-lived slyths, caretakers of the underworld; and the mysterious deep gnomes, the svirfneblin, master miners and concealers. There’s also cursory information on less  numerous races, including troglodytes, derro, minotaurs, mind flayers, and others. 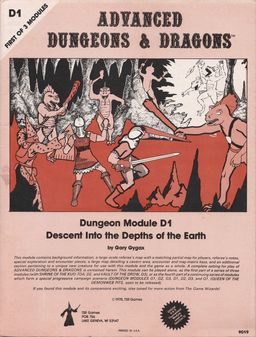 Next are the obligatory chapters on new regions and feats, prestige classes, magic and spells, and equipment and magic items. All of which readers expect, and which add some nice color to the settings, but it’s really just the build up to the main course.

That comes next, starting with a first-class 22-page chapter on new monsters. Fully illustrated in color, the monster chapter includes the kind of sinister beasts you can build whole campaigns around — including the awesome elder brain, an ancient, manipulative, godlike intellect floating in a pool of brine at the heart of a mind flayer city. Capable of budding brain golems and telepathically communicating with anyone within 350 feet, the elder brain is a terrifying opponent (and, at 484 hit points, not one that’s going to go down easy).

Other intriguingly nasty critters include the all-consuming hunger, an undead swarm of dead body parts; the monstrous 10-ton koa-toa leviathan; the hunched giants, the maur; and the bizarre and repulsive half-illithid, the result of mind flayer genetic experiments on other subterranean races.

The next chapter, Exploring the Underdark, has some very useful encounter tables and a few words on Underdark hazards, things like slimes, molds, fungi, lichen and the like. But the really useful section here is the Underdark primer, which separates the underground world into three sections: the Upperdark, home to creatures often seen on the surface, such as goblins, dwarves, orcs, chitines, minotaurs, stone giants, and troglodytes; the Middledark, the dark kingdom of the drow, duergar, mind flayers, umber hulks, koa-toas, grimlocks, hook horrors, and fomorian giants; and finally the deepest roots of the Earth, the Lowerdark, lair to the really nasty stuff: beholders, aboleths, cloakers, deepspawn, derro, elenentals, and the strangely benevolent desmodus.

That brings us to the largest chapter in the book, and easily my favorite: the 62-page Geography section. This is where the authors’ creativity really shines, as they map out the rival kingdoms, cities, and ancient lost territories that make the Underdark one of the richest adventure settings in all of gaming.

The section opens with a detailed two-page map, followed by a key that outlines dozens of Underdark points of interest. Here’s a small sample:

That’s just a taste of some of the more interesting entries from A to E.

Browsing this section is guaranteed to give even the most unimaginative game masters all the plot hooks they need to generate countless gaming sessions in the Underdark.

The books wraps up with a brief section on Adventures in the Underdark, with some additional ideas for creating dungeons for players to adventure in, and even a small 4-page sample adventure.

Here’s the enticing text on the back of the book:

Descend into the Darkest Reaches of the Realms

The ebon depths of the Underdark have spawned more fables and fears than any other region of Faerûn. In this lightless world, the hazards of its unforgiving wilderness are exceeded only by the perils found within the communities of races such as the aboleths, illithids, duergar, and drow. Explore the labyrinthine tunnels and endless caverns of the Realms Below to encounter denizens and dangers of one of the most intriguing, inhospitable regions in the Forgotten Realms game setting.

And here’s the evocative back cover art: 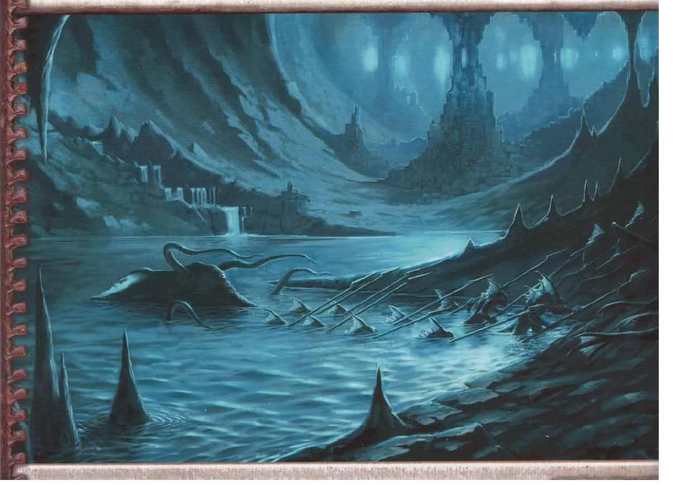 Forgotten Realms: Underdark is one of the most readable and entertaining gaming supplements I’ve read in years and it’s well worth the few measly bucks sellers are charging for it these days. If you think your underworld design has recently gotten stale, or if you just want to remind yourself of the magic of Gary Gygax’s original D-series adventures, then this book is what you’re looking for.

Forgotten Realms: Underdark was written by Bruce R. Cordell, Gwendolyn F.M. Kestrel, and Jeff Quick. It was published in hardcover by Wizards of the Coast in 2003, with a retail price of $32.95. It is 192 pages in full color; there is no softcover or digital edition. It was written for Third Edition Dungeons and Dragons, version 3.5, and requires the use of the Forgotten Realms Campaign Setting.

I have great fondness of the Vault of the Drow, though I’ve never been there. When the original UA came out, two of us ran drow characters in a Greyhawk campaign that lasted, off and on, over 12 years.

Our campaign was on the bones of the GM’s previous campaign, with his former players’ PCs established as NPCs in our campaign. That previous group had been to the Vault, and one of them returned with Nilonim as a henchman. Remember Nilonim? Imprisoned renegade drow? My character became good friends with him.

So my fondness is due to the depth it added to our campaign, even though I never visited. 🙂

Quite a story! I’m sad to say I don’t remember Nilonim… but it’s been many years since I read Vault of the Drow. I’m running my children through the first module in the AGAINST THE GIANTS series, so I hope to tread that hallowed ground again soon!

[…] been very impressed with what I’ve sampled so far, including Lost Empires of Faerûn and Underdark, both of which were top-notch. They proved easily adaptable to my current campaign, and Underdark […]

[…] the Echoes of a Vanished Product Line in Lost Empires of Faerûn Descend Into the Depths of the Earth in Forgotten Realms: Underdark Delve Into a 3-Part Supermodule With Cormyr: The Tearing of the Weave Against the Giants of Chaos: […]