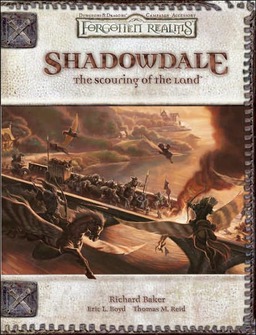 Last month, I took a look at the the first Third Edition D&D Cormyr supplement, Cormyr: The Tearing of the Weave, released in March 2007. It was a 160-page mega-adventure detailing a vast and sinister conspiracy deep in the Realms, and the first installment of what would eventually be a three-part supermodule.

I wasn’t aware Cormyr was part of a series while I was bidding like a fiend in the front row of the Spring Games Plus Auction. It was just one of several Forgotten Realms products I won, and all I knew at the time was that it was in brand new condition and criminally cheap – probably because it was released for version 3.5 and now was nearly two versions out of date.

So after I read through Cormyr and discovered I had just one third of an epic story line, I went scrambling through the rest of my auction winnings to see if I’d also scored any other parts of the saga. Luckily, I quickly found Part II: Shadowdale: The Scouring of the Land, which picks up the thread and hurtles our adventurers deep into the newly-conquered land of Shadowdale.

Shadowdale lies conquered! Who can free this oppressed land?

Zhentish soldiers, Maerimydran drow, and Sharran cultist have forged a dark alliance to subjugate the peaceful land of Shadowdale. Elminster’s tower lies in ruins, Lord Amcathra governs at the sufferance of the dale’s conquerors, and the very Weave of magic in this embattled land seems to fray with each passing day. The Zhentish yoke lies heavy over Shadowdale — but the Dalesfolk are ready to fight for their freedom, if only they can find true heroes to lead the way!

This Forgotten Realms campaign adventure is designed for characters of levels 9-13. It can be played as a stand-alone adventure or as the second adventure in a three-part series. Each encounter contains tactical information for the Dungeon Master and expanded map features for ease of play.

[Click any of the images in this article for larger versions.]

The adventure that begins in Cormyr: The Tearing of the Weave and continues in Shadowdale: The Scouring of the Land concludes in Anauroch: The Empire of Shade.

According to the Forgotten Realms Wiki, Shadowdale is a farming community in the Dalelands, home of the famous archmage Elminster and a place so lousy with ancient ruins and other adventuring sites that it’s a popular place for adventurers to settle.

Like Cormyr, it’s a chunk of geography that’s been well explored in previous novels and gaming releases from TSR/Wizards of the Coast, starting with the first novel in The Avatar Trilogy, Richard Awlinson’s Shadowdale (1989). 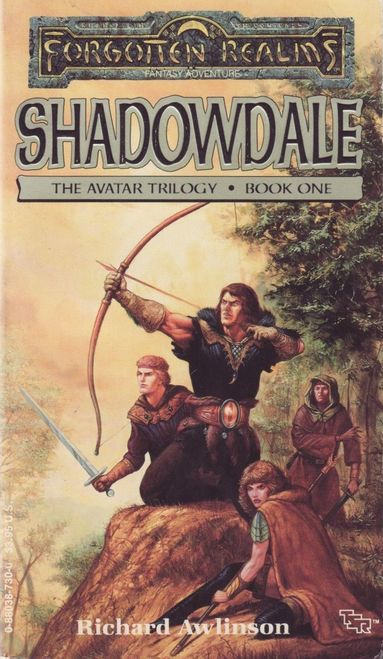 The cover art is by Jeff Easley.

The same year, Ed Greenwood released a 48-page adventure module, FRE1: Shadowdale (for Forgotten Realms Epic), the first of a three-part series for 2nd Edition AD&D that featured the same setting and many of the same characters as Awlinson’s novel. 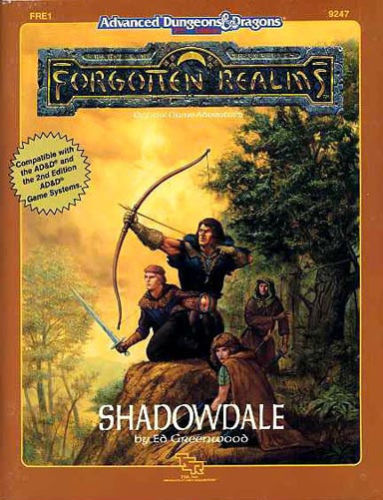 By the late 80s, TSR had really mastered the novel/gaming crossover marketing they’d pioneered with the bestselling DragonLance novels in 1984. They drew curious book readers into the game by the thousands, and sold millions of fantasy novels to game players. Dozens of novel releases were tightly coordinated with ambitious gaming rollouts, in what must have been a program manager’s nightmare. I’m not sure anything like it had been seen before in American publishing, and I doubt anything of the same scale has been seen since.

Shadowdale featured prominently in several other releases, including a separate booklet describing it in greater detail in 1993, with a fine Clyde Caldwell cover. 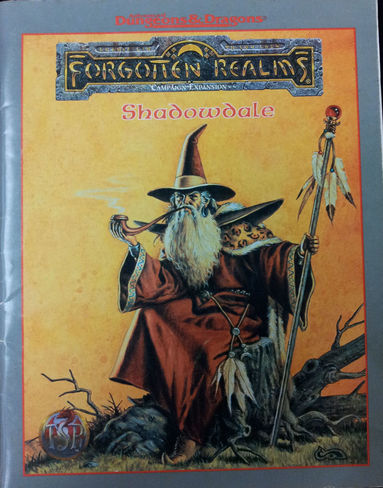 This was part of the 2nd Edition Forgotten Realms Campaign Setting boxed set, released in 1993. 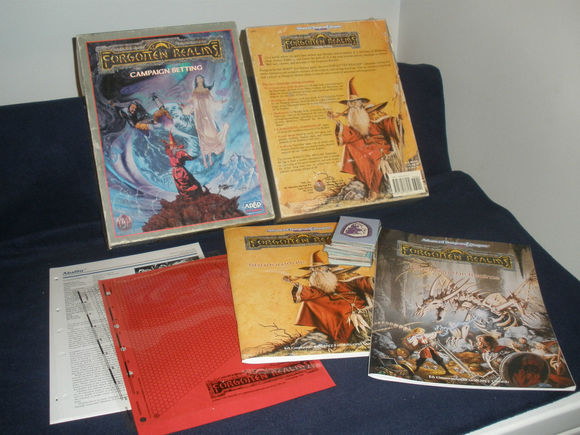 Younger readers are probably more familiar with Shadowdale from the 2003 edition of the novel, this time released under author Richard Awlinson’s real name, Scott Ciencin, with a Brom cover. 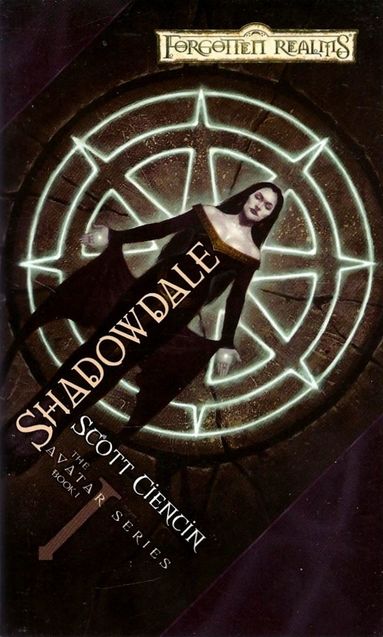 For years, I just thought there were two Forgotten Realms novels titled Shadowdale: one by Richard Awlinson from 1989, and the other by Scott Ciencin fourteen years later. I bet I wasn’t the only one.

The Third Edition supplement visited some epic doom on the pastoral lands of Shadowdale, subjugating it beneath the heel of a combined force of drow, Zhentish soldiers, and worse foes. Even the home of the mighty Elminster has been toppled and the PCs will need to exhibit daring and a lot of resourcefulness to drive the invaders out.

So far, we’ve covered five Third Edition Forgotten Realms products, most of them purchased at the Spring Games Plus Auction:

Shadowdale: The Scouring of the Land was written by Richard Baker, Eric L. Boyd, and Thomas M. Reid, and published by Wizards of the Coast in July 2007. It is 160 pages in full cover, priced at $29.95 in hardcover. There is no paperback or digital edition. I bought a new copy at auction for $6.

I hate to admit it. But the Brom cover is why my 15 year old self never bought the shadowdale book, which led me to miss out on the whole avatar series.

Not sure if that’s a good thing or not.

The Brom version certainly brings a very different (and much darker) tone to the proceedings than Jeff Easley’s original. I quite like the Brom myself. I wonder which one sold better?

[…] of auction loot, apparently purchased during an episode of auction fever for just $6. I examined Shadowdale: The Scouring of the Land in a blog post last […]