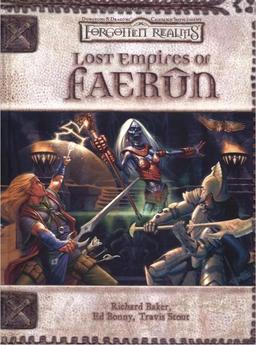 I’m still processing the boxes of gaming loot I brought home from the Spring Games Plus Auction. Honestly, this could take a while. You may want to get a coffee or something.

I find it fascinating to watch the items that set off a bidding frenzy. The Descent games I talked about last time, for example. Or absolutely any expansion sets for Wizard of the Coast’s out-of-print Heroscape — lordy, yes. I wish I had a closet filled with those babies. I’d retire to Bermuda.

But it’s no fun to bid on stuff that far out of my price range. Gape while everyone else bids like crazy? Sure. But bid yourself? No. It’s like asking the Homecoming Queen to Prom. Sure, everybody’s doing it, but it ain’t easy on your self-esteem.

But you know what is fun to bid on? Cheap stuff, and especially cheap stuff that was once very expensive. Like premium D&D products that are now one or two editions out of date and selling at rock bottom prices. Items like a brand new copy of Lost Empires of Faerûn, which originally retailed for $29.95 and which I snapped up for 6 lousy bucks.

Let me paraphrase from the back of the book. Something, something, secrets of past empires of the Forgotten Realms, comprehensive sourcebook, new feats, stuff, prestige classes, magic stuff, equipment stuff. Can I use this to put together an adventure in 10 minutes when I manage to forget game night switched to Friday? Yes? I’m sold.

Apparently, the book also contains gaming advice on ruins, including rules for how to build and sustain a ruin-based campaign, a bunch of detailed adventure sites with maps, artifacts, and some new monsters. You had me at “ruin-based campaign.” Take my money already.

Lost Empires is a sourcebook exploring the ruins and secrets of the fallen empires of the Forgotten Realms campaign setting. Admit it — any time “sourcebook” and “ruins” go together, you know you’re going to get good some use of it.

The ruins and remnants of once-mighty nations lie scattered across the lands of Faerûn. Hidden within the dusty vaults and passages of these crumbling monuments, great treasures and terrible dangers await discovery. Only those bold explorers armed with courage and equipped with knowledge dare to delve into these earliest secrets of the Forgotten Realms setting. 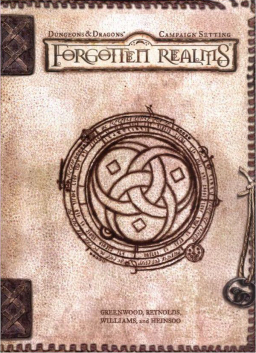 Which means — in case it’s not obvious — that use of this book requires the Forgotten Realms 3.0 sourcebook (that’s the one with the rather bland cover, at right). In practice, almost any version of Forgotten Realms will probably do in a pinch. And if you haven’t got one of those, you’re clearly not going to enough auctions.

There’s a dark side to these auction bargains. After winning Lost Empires of Faerûn, I promptly won a whole series of Third Edition adventure settings, including Cormyr, Shadowdale, and Underdark. All brand new, and all for seven bucks or less.

That’s a little distressing, actually. Don’t get me wrong, I love carting home cheap dungeon swag. But these auctions are like a barometer for gaming trends. When I’m getting great bargains, it’s because the industry has lost interest in the stuff I’m buying.

Why the sudden apathy towards all things 3.0/3.5? I’m not really sure, to be honest. Perhaps it’s simply that players are waiting for the impending 5th Edition. Perhaps WotC simply overprinted these books (wouldn’t be the first time).

Or perhaps the industry as a whole is moving away from D&D altogether, as Pathfinder, OSR, and fantasy board gaming all continue their decade-long  ascendance.

Who knows. What I know is that I got a lot of great bargains and my wife won’t let me buy any more new games for at least the next three months, so I expect to get a lot of use out of these (the ones that aren’t in shrinkwrap, anyway.)

Lost Empires of Faerûn was published by Wizards of the Coast in February 2005 and written by Richard Baker, Ed Bonny, and Travis Stout. It is 192 pages in full color, priced at $29.95 in hardcover. There is no softcover or digital edition. It was written for Third Edition Dungeons and Dragons, version 3.5.

No edition is out of date if that’s the edition you play. Or so I tell myself, clinging obstinately to my battered 1st edition DMG.

(If it’s any comfort, the auction prices seem to be considerably less than books are currently listing from Amazon 3rd party sellers.)

I have and LOVE this book. Nothing, and I mean NOTHING produced for the FR in 3/3.5 wasn’t worth every penny.

> No edition is out of date if that’s the edition you play.

Truer words were never spoken! I continue to play 1E with my kids (and the neighbor kids). They love it, and used copies of First Edition AD&D books are still lots cheaper than fourth edition. 🙂

That’s very possible. It’s maddening to be a publisher, of course… the surest way to keep your game alive in a crowded marketplace is with a steady stream of exciting, useful supplements and adventures. The moment you stop, the fickle market forgets you. But dare to publish just a few too many, and people complain the market is flooded and “there are too many books.”

> I have and LOVE this book. Nothing, and I mean NOTHING produced for the FR in 3/3.5 wasn’t worth every penny.

Glad to hear it. How well do they adopt to a first edition campaign? 🙂

I’ll probably have to restrain myself, at least for the time being — I just spent too much completing my 2e Dark Sun collection, and just for fun I added the Dragonlance and Kara Tur trail maps to the mix. (I do love good maps.)

I’m with Scott on this. The forgotten realms campaign setting was the first dnd book I bought after the 3 core 3.5 books. The book is so good it led me to buy dozens of RPG books only to find out that it was the best one.

Come to think of it you can add the Eberron 3.5 hardbacks to that list as well.

> I’ll probably have to restrain myself, at least for the time being — I just spent too much completing my 2e Dark Sun collection

A noble undertaking! Did you ever find the revised DARK SUN box set, also released for 2e? It’s a little harder to track down, but well worth it.

> The forgotten realms campaign setting was the first dnd book I bought after the 3 core 3.5 books.
> The book is so good it led me to buy dozens of RPG books only to find out that it was the best one.
> I own most of the 3.0/3.5 FR hardback books and they are all really good.

I’m enjoying them now for the first time. I’m really impressed with the creativity and level of effort put into them.

John — Yes, I got the revised boxed set. I actually, over the course of a couple of years, ended up buying two (used) copies — the first one was missing one of the maps, although I didn’t realize it at the time. The second one had all the contents, but one side of the box was seriously sun-bleached. So I picked and chose to assemble the best possible set from the available pieces.

Joe — That’s a true collector’s mentality. I recognize it well! 🙂

Tell me, which version of the DARK SUN boxed set is the one to get? I was always curious about the second edition, but it never seemed an essential purchase.

Hmmm … All other things being equal, the second edition would probably be the way to go — it expands the setting considerably (has two overland maps, each of which covers somewhat more territory than the single overland map in the original box). It also moves up the timeline and makes some changes — I think the changes are based on events in the novels and maybe events in some of the modules/supplements, but I haven’t had a chance to go through it that closely yet.

Having said that, there’s certainly nothing wrong with the original version and it may be more readily available.

[…] been very impressed with what I’ve sampled so far, including Lost Empires of Faerûn and Underdark, both of which were top-notch. They proved easily adaptable to my current campaign, […]

[…] Explore the Echoes of a Vanished Product Line in Lost Empires of Faerûn Descend Into the Depths of the Earth in Forgotten Realms: Underdark Delve Into a 3-Part Supermodule With Cormyr: The Tearing of the Weave Against the Giants of Chaos: Shadowdale: The Scouring of the Land A Shadow Falls Over Faerûn: Anauroch: The Empire of Shade […]