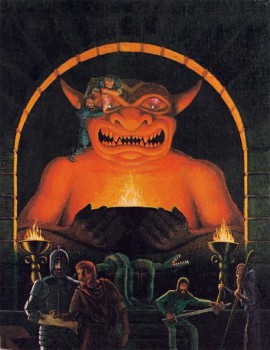 Today is a day of mourning for those gamers who were brought into the industry during the ‘great launch’ of Advanced Dungeons & Dragons in 1978. That year the AD&D Player’s Handbook hit the market, and nothing in the life of role-playing would ever be the same again. One reason, and certainly one of the most recognizable not named Gygax, was the cover art by David Trampier. On Monday, March 24th, Mr. Trampier passed away in southern Illinois at the age of 59.

That age in itself is a tragedy, but one that can only be further exacerbated by what could have been for a man many gamers considered the great white whale of RPG fantasy artwork.

More words than can easily be counted have been written about Trampier over the years, most hypothesis and some truths, but in the end all we know now is that he is gone.

As an adept in the industry of RPG artwork, I’ve made it my life’s calling to track down bygone artists. But Trampier was never one of them. Sure, I’ve spoken in depth to his relations, and even as late as last August had a lengthy conversation with a group of RPG power brokers on the best course of action to approach him, including old friends on a road trip and private detectives, but in the end Trampier was even too far removed for me, and honestly I can’t say whether that now makes me happy or sad.

What I do know it that in the late 1980s, during his run with the Wormy comic for TSR’s Dragon magazine, Trampier suddenly went off the grid.  At the time, he’d have been only 34 years of age, and smack in the middle of his prime as an artist. Now, 25 years later, he is gone, and not a single shred of artwork was produced by his hand over the course of those intervening years.

Now that brings me profound sadness. 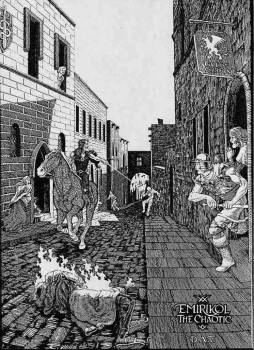 I cannot speak of the man or his demons or angels, but I will say that in the process of my work, I’ve found dozens of old school RPG artists and every single one of them has been damaged by their choice of career. I can only assume that Trampier’s life reflected that hard fact and I feel for him, for his struggles, and for his final resolution, even if it deprived the world of a singular talent.

Perhaps, in the end, he was better for his choice and saved the heartache, financial ruin, and industry ostracization so many older artists face on a daily basis in 2014. Perhaps driving a cab can give one peace you can’t find under an art director’s watchful eye, a collector’s scheming plans to take your creations, or a fan’s overzealous desire for unwanted contact. Of these things I can only guess and make thoughtful conclusions based on the roads I’ve traveled, but nonetheless we have all lost something more than the man who created so many wonderful images for TSR, we lost our dreamers’ hope on Monday…

That hope, felt by almost all old school gamers, was that one day Trampier would return and bless us all with some new creation, some unseen masterpiece like the days of old, or some conclusion to a Wormy series that was cut off before its conclusion. Hope, now gone, will be buried along with the man so many of us loved beyond his ability to understand, not because he could paint or draw, but because without him hundreds and perhaps thousands of lives might have been different as now life-long gamers might have never reached for that hardcover Player’s Handbook in the first place.

Trampier, for all his mystery, was the bridge, but now he is gone, and a chasm is forever left behind that no one can again traverse in hopes of finding visual adventures beyond our wildest dreams.

Thank you for your sincere and very eloquent post about Mr. Trampier. I’m sorry you had to be the bearer of such sad news.

I always hoped Mr. Trampier was secretly working on some project, or perhaps completing Wormy over these many years, but from what I can gather from your post and from The Castle’s Ramparts blog post about Mr. Trampier’s passing, that is not the case.

It did appear Mr. Trampier was beginning to change his mind about creating art and getting his older work published from the above blog post, but alas, that will never happen now.

In the end, it doesn’t matter. I hope Mr. Trampier was surrounded by his family and loved ones when he died and that he is now at peace.

Trampier’s linework was a huge influence and inspiration for me, and it started a lifelong appreciation for pure black&white drawings. Sad news, indeed.

Man, this post was a bummer. If you’re considering suicide, don’t read this obit.

So sad to read this. His art is my favorite from D&D’s early days. The lack of a conclusion to Wormy is still frustrating all these decades later.