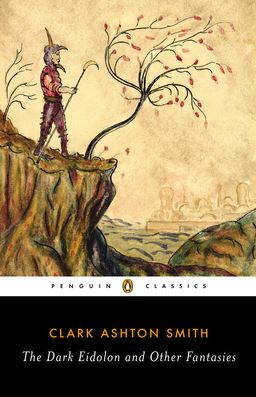 At long last, Clark Ashton Smith gets a little respect.

The highly regarded Penguin Classics line — which scholars and teachers love to rely on when drawing up things like course reading lists — has been slow to embrace pulp writers, and especially pulp fantasy writers. But in the last decade or so they’ve been correcting that oversight, starting with Lovecraft (The Call of Cthulhu and Other Weird Stories, Oct. 1999, The Thing on the Doorstep and Other Weird Stories, Oct. 2001, and more.) They’ve done a little better with other fantasy writers, including Lord Dunsany (In the Land of Time: And Other Fantasy Tales, February 2004), Arthur Machen, Shirley Jackson, M. R. James, and others.

Much of this has been the result of the efforts of editor S.T. Joshi, who now brings Penguin Classics their very first pulp sword & sorcery collection, gathering together the best work of the great Clark Ashton Smith.

Called “unexcelled by any other writer, dead or living” by H.P. Lovecraft, Clark Ashton Smith, a prolific poet, amateur philosopher, bizarre sculptor, and unmatched storyteller, simply wrote like no one else. Now, The Dark Eidolon and Other Fantasies, the much-awaited collection of poetry and prose from Clark Ashton Smith, introduces him into the Classics as a cosmic master artist who saw horror and wonder in all things, and in whose pen note a single sentence was safe.

This collection of his very best tales and poems, selected and introduced by supernatural literature scholar S.T. Joshi, allows readers to encounter Smith’s visionary brand of fantastical, phtantasmagorical worlds, each one filled with invention, terror, and a superlative sense of metaphysical wonder. The volume’s title story — a revenge tale that ends with macrocosmic stallions returning to trample a house they had formerly spared — is set in Smith’s Zothique story circle, in which the last inhabited continent on Earth watches humanity at the end-time regress to a pre-modern state.

The Dark Eidolon and Other Fantasies was published by Penguin Books on March 25. It is 370 pages — including 32 pages of Explanatory Notes on the stories by Joshi — and priced at $16 in trade paperback and $9.99 for the digital edition.

Our other coverage of Clark Ashton Smith includes:

Has anybody been able to find a table of contents online for this book? I’m just curious as to what stories were included in it.

Thanks for the reminder! Just ordered my copy…

No disrespect to the great Lovecraft and Howard, but Smith has always been my favorite of the “Three Musketeers of Weird Tales” and I’m very happy to see this collection, though of course like any CAS fanatic I have a favorite or two that Joshi left out. (Please – The Weird of Avoosl Wuthoqquan should have been included – it’s the best proof that Smith often had his tounge firmly planted in his cheek.)

James — You can see the contents if you go to the Amazon page and open up the Kindle sample. Based on the titles, it looks like a very nice collection, including a fair bit of his poetry.

Thanks! On Amazon, I always assumed that if the contents weren’t available for the paper or hardback, they just weren’t available. I never thought of checking the kindle version. Thanks for the tip!

Looks like “A Night in Malneant” isn’t going to be included in this volume. Shame. If you’re interested in hearing the late Fritz Leiber read this story from CAS, check out the following link:

Whoops! The actual link is the following:

James – thanks so much for this Lieber audio link – what a treasure! I met Leiber once at the Change of Hobbit bookstore in L.A. around the time he did this reading. I was blown away by the attention and courtesy he showed to a young fan; he was a true gentleman.

emcgargle–don’t mention it. It is a mesmerizing reading of the story. I can’t read it without hearing Leiber’s voice in my head. Excellente!

Wonderful news! I consider this a watershed moment in Smith promotion comparable to Del Rey’s 1982 collection, The Best of H.P. Lovecraft. Smith has been ill-served by Arkham House and even his own estate, and both Joshi and Penguin are to be congratulated for granting him higher visibility and hence greater discoverability.

This Penguin volume should indeed give Smith the boost in literary reputation that he so much deserves, but true Clarkashtonians have to get the five volume Collected Fantasies that Night Shade (Tsathoggua bless them) published a few years ago. I waited thirty five years for those books…

@emcgargle: I wanted to get all collect the five volume Nightshade set but the first two or three are out of print and are WAY OUTSIDE my price range. I’m sure they’re in kindle versions, but I’m old school when it comes to books.

James, I thought that quick-OOP and expensive to get used would be the fate of the Nightshade books, so I grabbed ’em as soon as they were off the presses. I wasn’t kidding about waiting most of my life for them.

BAH! I’m still not finding a Table of Contents, and I don’t have Kindle Fire.

[…] New Treasures: The Dark Eidolon and Other Fantasies by Clark Ashton Smith […]

[…] edited numerous collections and anthologies, including the brand new The Madness of Cthulhu, The Dark Eidolon and Other Fantasies by Clark Ashton Smith, and the long-running magazine Lovecraft Studies. But the thing that’s […]

[…] Arthur C. Clarke, the reader learns about Diaspar and the history of Earth alongside Alvin and, in The Dark Eidolon by Clark Ashton Smith, the reader is just as surprised as everyone else when the devils and […]