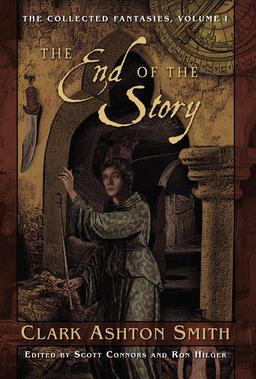 The End of the Story is the first of five volumes collecting all of Clark Ashton Smith’s short fiction, arranged chronologically by composition. It was originally published in hardcover by Night Shade Books on January 1, 2007, and quickly went out of print. The cheapest copies I can find online start at over $200.

I would love to have a copy, but that’s well outside my price range. So I was delighted to discover that Night Shade is printing the entire series in trade paperback, starting with the first volume, which goes on sale tomorrow.

The Collected Fantasies of Clark Ashton Smith consists of:

The trade paperback edition of the second volume, The Door to Saturn — also long out of print in hardcover, and selling in some places for well over $300 — is scheduled to appear January 5, 2016.

The End of the Story contains 24 short stories and three poems, beginning with “The Abominations of Yondo,” first published in Overland Monthly in April 1926. It includes some of his most famous tales, such as the Captain Volmar novelette “Marooned in Andromeda” (1930), the Malygris tale “The Last Incantation” (1930), and the novelette “The Monster of the Prophecy” (1932).

It also includes an introduction by Ramsey Campbell, and story notes and a bibliography by Scott Connors and Ron Hilger.

Clark Ashton Smith, considered one of the greatest contributors to seminal pulp magazines such as Weird Tales, helped define and shape “weird fiction” in the early twentieth century, alongside contemporaries H.P. Lovecraft and Robert E. Howard, drawing upon his background in poetry to convey an unparalleled richness of imagination and expression in his stories of the bizarre and fantastical.

The Collected Fantasies series presents all of Smith’s fiction chronologically. Authorized by the author’s estate and endorsed by Arkham House, the stories in this series are accompanied by detailed background notes from editors Scott Connors and Ron Hilger, who in preparation for this collection meticulously compared original manuscripts, various typescripts, published editions, and Smith’s own notes and letters. Their efforts have resulted in the most definitive and complete collection of the author’s work to date.

The End of the Story is the first of five volumes collecting all of Clark Ashton Smith’s tales of fantasy, horror, and science fiction. It includes all of his stories from “The Abominations of Yondo” (1925) to “A Voyage to Sfanomoë” (1930) and an introduction by Ramsey Campbell. 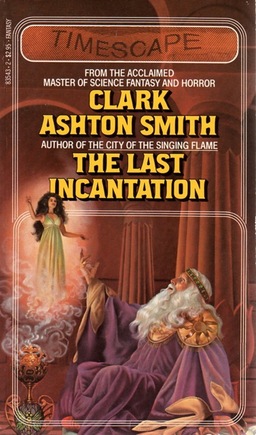 The End of the Story: The Collected Fantasies, Vol. 1 was published in hardcover by Night Shade Books on January 1, 2007, and will be reprinted in paperback on September 8, 2015. It is 300 pages, priced at $17.99 in trade paperback, and $7.99 for the digital version. The cover is by Jason Van Hollander.

The smartest thing I ever did was buying the Hardcovers as soon as they came out. The dumbest thing was not buying as many extra sets as I could. $200?!

I couldn’t wait, so I got all of them on Kindle. But it’s not the same…I want to get the new softcovers too. That Timescape collection, THE LAST INCANTATION, was my first CAS book, found like a forgotten jewel in a used book store. Those tales made me look for CAS collections in every story I went to for years and years after. Eventually, the internet came along and -bam- you could find pretty much any book. It was nice, but sometimes I miss discovering lost treasures in mysterious old bookstores. Still, it’s convenient having all of these CAS volumes stashed inside one device. Best of both worlds, I guess.

CORRECTION: “..in every store I went to…”

Reminds me it’s almost time to read the next in the series — I think I’m up to v3.

(I find Smith to be like Ben & Jerry’s Phish Food in some ways — one of my favorite things, but so rich that there’s a limit to how much I can take in a single sitting.)

I feel extremely fortunate to have 4 of the 5 volumes in the hardcover versions, thanks mostly to a generous mom & dad who got them for me as Christmas gifts. Somehow I missed vol. 2, so I’m VERY happy to see that a trade pb version will be out next year. These are beautiful books, and I treasure them very much, for content as well as appearance.

Usually when I find a book starting at $200 at Amazon, I just smile and head over to eBay, where I can (pretty reliably) track down copies for considerably less.

Not so with this one. There are currently zero copies for sale (that’s right, zero) of the hardcover edition on eBay. Demand for these books just seems to be going up.

Indeed! One of my favorite things to do on a Saturday afternoon was do a circuit of the 3-4 top notch used book stores in town. That was when I first moved to St. Charles in the 90s. They’re all gone now, of course.

Does anyone know the cover artist for these volumes? I’m having a devil of a time tracking him (or her) down online.

About time! I’ve only had access to CAS through old BAF collections and the new Penguin edition that came out last year or so. I’ve often wondered why Nightshade hadn’t reissued these.

Thanks John for making me aware of these new paperbacks coming out!

Thanks Joe! I’ve amended the article to note that above.

> Thanks John for making me aware of these new paperbacks coming out!

You are most welcome, James!

I appreciate the heads up. I’ll have to add it to the que.

I’m sooo happy. I’ve ordered mine. I had the hardbacks, but had to sell them a few years ago due to emergency expenses. But luckily, balance has now been restored to the universe.

Now all they have to do is re-release the 5 Wellman collections in paperback.

The audio book on audible for this (narrated by Fleet Cooper) is quite good. CAS’s poetic language deserves to be listened to. The short takes make easy to squeeze in most schedules.