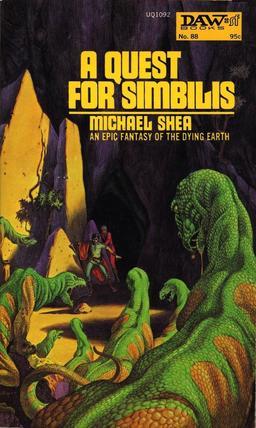 The stories that surround Michael Shea’s first novel, A Quest for Simbilis, have the stuff of legend.

In the early 70s, Michael found a copy of Jack Vance’s Dying Earth novel The Eyes of the Overworld in the lobby of a hotel in Juneau, Alaska. The book stayed with him for four years, through a brief first marriage and extensive travels, hitch-hiking through France and Spain, until he sat down to write an homage to Vance and a sequel to his novel. It was published in paperback by DAW Books in 1974 and was a finalist for the British Fantasy Award.

There are dangers to playing in someone else’s playground, and some at the time saw Michael as a dabbler, not really serious about writing. But nothing could have been further from the truth, as his wife Lynn noted in the announcement of his death at Michael Shea’s website on March 7th.

Michael published his first novel, A Quest for Simbilis, in 1974, and for all the years that I knew him, he wrote almost every day. Novels, short stories, and, his first love, poetry poured out of him up through the very last day of his life. Some thought of Michael as reclusive, when in fact he was just old-fashioned, a writer’s writer. Once a piece was perfect, he wanted to set it aside, forget it, and begin the next project. Even so, we, his family, feel that, along with our memories, his written works are what we still have of him.

Michael’s family have now turned his website into a forum where his friends and fans can “share their experiences, both literary and personal, as well as find access to new releases and formats of his work.” Visit the site here.

Jack Vance graciously declined to share the advance offered by DAW Books for A Quest for Simbilis, but allowed the book to be released as an authorized sequel to his Dying Earth novels. Eventually, Vance took the series in a different direction when he published a third book, Cugel’s Saga, in 1983.

Nonetheless, A Quest for Simbilis launched Michael’s career and it remains an entertaining and highly readable fantasy. Here’s Don Wollhiem’s blurb from the back cover:

In the Last Days of The Dying Earth…

Cugel the Clever was seeking revenge when he met Mumber Sull who was seeking justice. Revenge and justice may seem phantom concepts when the sun may flicker and go out at any moment, but such is the eternal nature of man as it has always been since the dawn of time.

Mumber Sull owed his loyalty to the long-vanished overlord Simbilis, whose knowledge and science were legendary, whose domains had extended over vast terrain, and whose whereabouts had been lost for centuries. He persuaded Cugel that if they could but find Simbilis, they would both gain their just rewards.

The story of their quest for Simbilis is a marvel fantasy of adventure and wonder millions of years from now, on the Dying Earth that Jack Vance first described and which has now, by permission, been further chronicled by Michael Shea. 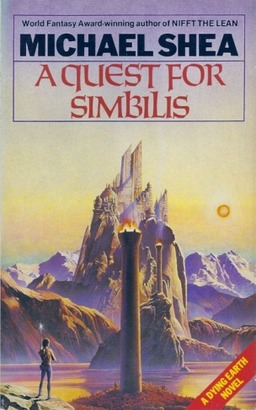 I’ve always wondered if, in publishing what was essentially fan fiction for a popular series, Don Wollhiem opened the floodgates to a thousand submissions from eager fans sending in their sequels to The Lord of the Rings; Watership Down; The Wind in the Willows; Carrie; Nine Princes in Amber; The Princess Bride;, A Wizard of Earthsea; The Lion, the Witch and the Wardrobe; and countless others. Probably. Poor bastard.

A Quest for Simbilis was published in 1974 by DAW Books. It is 159 pages, priced at 95 cents. The cover is by George Barr. There is no digital edition and it has never been reprinted, but there was a British edition from Grafton in 1985 with a cover by Geoff Taylor.

Another one of his I need to revisit someday. I’m happy to see that his site will continue to be maintained; I just hope that eventually this means more of his work will become more easily available.

I picked up a copy of this online several years ago, for six or seven dollars, I think. Imagine my delight when it turned out to be signed!

> I just hope that eventually this means more of his work will become more easily available.

Me too. Baen seems to have the rights to much of his out-of-print work, and they’re pretty forward-thinking in regards to digital versions. Here’s hoping.

> Imagine my delight when it turned out to be signed!