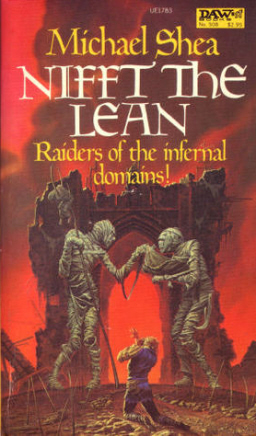 Michael Shea is one of the most fascinating characters in the genre. Consider this biographical tidbit from his Wikipedia entry:

At a hotel in Juneau, Alaska, Shea chanced on a battered book from the lobby shelves, The Eyes of the Overworld by Jack Vance (1966). Four years later, after a brief first marriage and one year hitch-hiking through France and Spain, he wrote a novel in homage to Vance, who graciously declined to share the advance… It was Shea’s first publication, A Quest for Simbilis (1974), and an authorized sequel to Vance’s two Dying Earth books then extant.

Nowadays we’d call that “fan-fiction,” and read it online. In 1974, A Quest for Simbilis was published in paperback by DAW books, and it launched Michael’s career — a career that has produced some of the most acclaimed fantasy of the past four decades.

Eight years after he burst on the scene with A Quest for Simbilis, Michael published one of the most important works of modern sword and sorcery: Nifft the Lean, a collection of four linked novellas published in paperback by DAW in 1982. It won the World Fantasy Award for year’s best novel, and accolades from every corner of the genre.

Nifft has reappeared several times since, first in The Mines of Behemoth (Baen, 1997) — collected with Nifft the Lean as The Incompleat Nifft (Baen, 2000) — and most recently in the novel The A’rak (Baen, 2000).

However, I’ve never read the original Nifft the Lean, and when I stumbled on a copy in a collection of DAW paperbacks I purchased last month, I decided it was time to rectify that. The marvelous Michael Whelan artwork is reminiscent of many other DAW S&S titles of the time, especially Michael Moorcock’s Elric books, and there’s a familiarity to it that I find very welcoming. I’m looking forward to reading the stories that inspired it.

Nifft the Lean was published in December 1982 by DAW Books. It is 304 pages in paperback, originally priced at $2.95. It is currently out of print.

One of my favorites — I envy you your first encounter. Have you read any of the later Nifft books?

(There’s also In Yana, the Touch of Undying, which is totally unrelated to the Nifft series but has a very similar feel and is also worth tracking down.)

Whenever I see a mention of Michael Shea, I feel compelled to mention his story “The Autopsy”, one of the greatest SF horror stories of all time.

IN YANA was the first Michael Shea novel I ever purchased, back in 1985. I remember putting my purchases down on the counter at The House of Speculative Fiction in Ottawa, Canada, and talking to Rodger Turner, the co-owner. I asked his opinion of the books I was buying.

One of the most compelling sales pitches I’ve ever heard!

Believe it or not, I almost mentioned “The Autopsy” when I was putting together the post! It is indeed one of the finest science fiction horror tales of all time.

And for all its horror, I think it’s also an oddly upbeat story. One of the few Lovecraftian-inspired tales in which the humans ultimately triumph (although at horrendous cost).

I also love the cover art on that edition of Nifft — I just checked and yep, Michael Whelan.

“The Autopsy” led me to Nifft — I read the story in, was it Hartwell’s Dark Descent?, which in turn led me to a library copy of Polyphemus, Shea’s Arkham House collection, which included one of the Nifft stories. Then, on I believe my very first visit to Uncle Hugo’s Science Fiction Bookstore, I happened to walk over to the appropriate section of the Used shelf, and there was a copy of Nifft. Fate, it must be.

Love these posts that track down older books. Definitely looks interesting. Any recommendations on the web where I can find good condition fair-priced older paperbacks like this? I usually have to hunt them down through amazon or bookfinder.com.

My only exposure to Shea is from another excellent horror short story: “Fat Face”. Very good Lovecraftian-ish tale. The only other place I’ve run into Shea is he did the intro to one of Laird Barron’s collections.

[…] still reading the books I picked up over the weekend — including Michael Shea’s Nifft the Lean, and Karen Heuler’s fascinating collection The Inner City. Heck, I haven’t even […]

> “The Autopsy” led me to Nifft — I read the story in, was it Hartwell’s Dark Descent?, which in turn led me to a library copy of Polyphemus

You made me curious, and I checked the Internet Science Fiction Database for a complete publicaiton history. Looks like “The Autopsy” has been reprinted well over a dozen times:

And yes — it was in THE DARK DESCENT. It appeared first in the December 1980 issue of The Magazine of Fantasy & Science Fiction.

> Any recommendations on the web where I can find good condition fair-priced older paperbacks like this?

I buy a lot of excellent low-cost paperback collections on eBay, from sellers like galactichayseed55. I also recommend Starfarer’s Despatch, who have an excellent back stock and great prices:

[…] next time I ran across Mr. Shea was in 1982, with his World Fantasy Award winning novel Nifft the Lean. Nifft is another fine reading experience. Mr. Shea has also authored two of my favourite […]

[…] Shea is the World Fantasy Award-winning author of A Quest for Simbilis, The Color Out Of Time, Nifft the Lean, In Yana, The Extra, and the new Assault on Sunrise, among other novels. His collections […]

[…] years later, Michael published one of the most important works of modern sword and sorcery: Nifft the Lean, a collection of four linked novellas published in paperback by DAW in 1982. It won the World […]

[…] leaving behind a legacy of underappreciated novels. We started with his Sword & Sorcery classic Nifft the Lean (1983), and his dark fantasy In Yana, the Touch of Undying […]

Black Gate » Blog Archive » The Novels of Michael Shea: A Quest for Simbilis