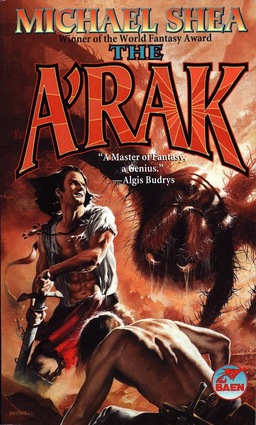 Michael Shea’s classic Nifft the Lean was published in 1982 and won the World Fantasy Award, a rare honor for a  sword and sorcery collection. Nfift returned in a three-part novel serialized in Algis Budrys’ Tomorrow Speculative Fiction magazine (June – November, 1996), eventually collected by Baen Books in paperback as The Mines of Behemoth.

Nifft made one last appearance in the year 2000, in his third and final book: The A’rak.

Prosperous Hagia’s vaults brimmed with gold. Her warehouse bulged with the goods of the Southern Seas. She had the Spider-God to thank for her prosperity.

But beneath Hagia’s ancient bargain with the A’Rak lay the direst danger. That mercenary kingdom had mortgaged its soul in its pact with the giant arachnoid. When the note fell due, death of the most hideous kind awaited the multitudes of that affluent and bustling nation.

As Hagia’s debt falls due, two foreigners arrive in Big Quay, her capital: Lagademe and her team, foremost among the world’s Nuncios — deliverers of anything to anywhere — and Nifft the Lean, thief and rogue extraordinaire.

Nifft and Lagademe, strangers to one another at the outset, will soon be struggling side by side for their lives — and a nation’s survival — against the most hideous foe in the annals of Sword and Sorcery fiction.

The A’rak was published by Baen in October 2000. It is 320 pages, originally priced at $6.99 in paperback. The cover was by Gary Ruddell. It was never reprinted, and there is no digital edition, so copies are in some demand.

Coming up: the ombnibus Nifft volume The Incomplete Nifft, published by Baen in 2000.

Were there any other Nifft stories published after this? I vaguely remember seeing things in anthologies in the past few years?

The notion of the smaller spiders devouring the souls of their victims and then being devoured by larger spiders and ultimately all being absorbed into one big alpha spider was a pretty neat idea.

As giant insects are a feature of the world Nifft inhabits, I wondered to what extent Shea drew on the natural world, and sure enough – http://en.wikipedia.org/wiki/Spider_wasp

[…] with his covers for Michael Shea’s Nifft the Lean novels for Baen (The Mines of Behemoth, The A’rak, and The Incompleat Nifft.) The cover artist for The Cult of Loving Kindness is […]