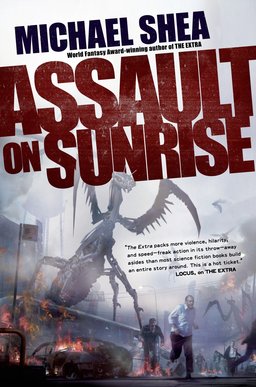 We’re back on the record with the fourth installment of our survey of the books of Michael Shea, who passed away last month. This time, we’re looking at his final novel, Assault on Sunrise, the sequel to The Extra and the second book of The Extra Trilogy — which, sadly, will presumably never be completed. As I mentioned last time, I honestly wasn’t sure it was the same Michael Shea when I first saw the cover of The Extra, as it looked more like an urban thriller than the kind of adventure fantasy Michael was famous for. With this volume, all my doubts were swept away. Only Michael Shea could pull off a giant-insect attack with this kind of panache in 2013.

Less than a hundred years in the future, pollution, economic disaster, and the rapacious greed of the corporate oligarchy has brought America to its knees and created dystopian urban nightmares, of which L.A. may be the worst.

Curtis, Japh, and Jool are film extras, who — with the help of a couple of very gutsy women — survived being anonymous players in a “live-action” film in which getting killed on-screen meant getting killed for real. Surviving the shoot made them rich enough to escape the post-apocalyptic Hell that L.A. has become. But their survival was not what Panoply Studios’ CEO Val Margolian had in mind, especially since it cost his company millions.

Now he’s taking his revenge. After several plainclothes police are found dead in the former extras’ new home, the bucolic, peaceful town of Sunrise, California, the entire town is subjected to Margolian’s invidious plan to punish the entire town… and make a fortune doing it. Margolian has created toxic, murderous wasp-like mechanical creatures to set upon the people of Sunrise, while his film crew captures the carnage in what promises to be the bloodiest “live-action” film yet. With their haven from L.A. besieged by the deadly assault, the former extras — and their fellow townspeople — are faced with a grim task: to defeat the creatures and take back their town and their freedom. Michael Shea’s Assault on Sunrise is a saga of courage and sacrifice in a world gone mad.

Assault on Sunrise was published August 13, 2013 by Tor Book. It is 287 pages, priced at $25.99 in hardcover and $12.99 for the digital edition. There is no paperback edition. I bought my copy new on Amazon for $3.98 in early March; discounted copies are still relatively plentiful from several sellers.

Michael may be gone, but the gifts he left us remain. So far we’ve covered:

Mental note: Need to pick this up.

[…] Extra was followed three years later by Attack on Sunrise, the second book in the Extra Trilogy. It was also set in a future Southern California, this time […]

[…] last two Michael Shea novels we discussed, The Extra and Attack on Sunrise, took his career in an intriguing and very different direction. But I still admit a greater […]

Black Gate » Blog Archive » The Novels of Michael Shea: A Quest for Simbilis