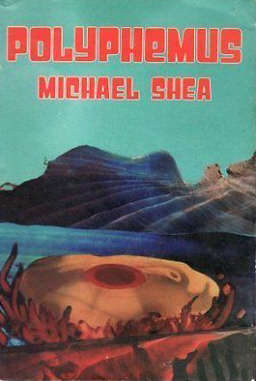 As much as I respect and admire Michael Shea’s fantasy novels — and many of them are magnificent — I think he did his best work at short length. And I believe his best collection, by a pretty fair margin, is his 1987 Arkham House volume Polyphemus.

I was so impressed with it — really, I was so impressed with a single story, the amazing novella “The Autopsy” — that before I even finished reading the whole volume, I thrust it into the hands of my friend Neil Walsh, the future editor of SF Site. (I never did get it back and eventually had to buy a new copy. But I don’t mind. As the saying goes, never loan books. They should be gifts.)

But I don’t think you should have to take my word for it. Here’s the distinguished Mr. John Hocking, whose taste in fantasy fiction, as we know, is impeccable, with a two-sentence review of “The Autopsy,” as quoted in Mark Rigney’s 2013 article “The Most Terrifying Short Stories Ever?”

Creeped me out as badly as anything I ever read. Most ghastly creature ever put on the page.

“The Autopsy” has been reprinted over a dozen times, in such places as David G. Hartwell’s monumental horror collection The Dark Descent (1988), The Best of Modern Horror (1989), The Best Horror Stories from the Magazine of Fantasy and Science Fiction (1990), Aliens Among Us (2000), Jeff and Ann VanderMeer’s massive anthology The Weird (2012) — and just this month it appeared in the e-book edition of Lightspeed magazine.

Now, Polyphemus’s rep by no means rests on that one story. Since I’m quoting two-sentence reviews, here’s Matt Finucane’s description of the title novella at the Vault of Evil.

An exploration team on a desert planet encounters the titular alien entity. The story’s presented as straight sci-fi (with interesting characterization for the humans), but the monster’s grotesque biology could be straight out of Lovecraft 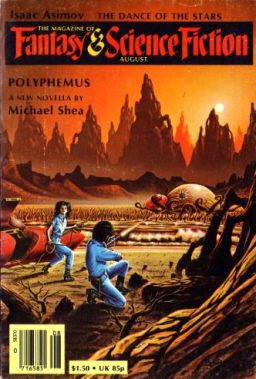 The book also contains a Nift the Lean story (“The Pearls of the Vampire Queen”) and “The Extra,” the short story that eventually became his novel The Extra. It also includes a fine Foreword by editor Algis Budrys. All but the Nifft story originally appeared in The Magazine of Fantasy and Science Fiction.

A Grimoire of Gore…

The tale of terror traditionally has presented such verdigris-encrusted images as the chain-rattling specter, the sanguine-fanged vampire, the flea-infested werewolf, or the slavering psychopath. The problem with these time-honored icons of horror literature — as H.P. Lovecraft presciently observed over half a century ago — is that their imaginative potency has been dissipated through auctorial overuse or through the decline of at least naive belief in the supernatural. For the sophisticated reader, monsters we have come to know and love do not a tale of terror make.

The Lovecraft answer — and the answer essentially pursued by Michael Shea — to this quest for new thematic material has been recourse to the terrifyingly vast and mysterious universe as revealed by modern science. The creatures that lurk through these pages are preponderantly cosmic rather than occult, and what creatures they are! Not in the entire history of the genre has an alien monstrosity been more compellingly presented than in ‘Polyphemus,’ while ‘The Angel of Death’ portrays a gripping encounter between two trans-stellar emissaries. The insidious alien of ‘The Autopsy’ not only is one of the great gut-wrenching experiences in modern horror, but the work itself has become a contemporary classic of the macabre.

In addition to Shea’s supreme mastery in the realm of cosmic horror, this new volume displays every other type of imaginative narrative in which the author excels, from the humorous avenging revenant to picaresque heroic fantasy to cyberpunk-influenced science fiction. The best of Michael Shea is an astonishing tour de force, embracing some of the finest speculative fiction of our time. 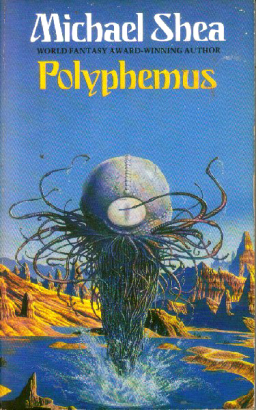 Polyphemus was published in December 1987 by Arkham House. It is 245 pages, priced at $16.95 in hardcover. The rather bland cover is by Harry O. Morris. There was a British edition from Granta published in 1990, with a cover by David O’Connor. It has never been reprinted and there is no digital edition.

Michael Shea passed away in February and we’ve been surveying his complete works here.

So far we’ve covered his novels:

This was my first full introduction to Shea — I had read The Autopsy in The Dark Descent (and it did, as per Mr. Hocking’s review, creep me out quite badly) but hadn’t necessarily noticed the author.

A few years later (1990, I think it would’ve been) I came across a copy of Polyphemus in a local library and was blown away. That collection led directly to me pulling a copy of Nifft the Lean off the shelf the first time I ever visited Uncle Hugo’s Science Fiction Bookstore (also 1990).

Shea’s “The Autopsy”, “Copping Squid” and “Fatface” are three classics that every weird fan should read and have in their library. Three amazing stories from an a great weird author!

> I had read The Autopsy in The Dark Descent (and it did, as per Mr. Hocking’s review, creep me out quite badly) but hadn’t necessarily noticed the author.

I wish I had read THE DARK DESCENT back in 1990. It would have pointed me towards a lot of modern horror writers it took me decades to discover on my own.

> Shea’s “The Autopsy”, “Copping Squid” and “Fatface” are three classics that every weird fan should read and have in their library.

I must admit I have yet to read “Copping Squid.” But I do have it in my library!

Eesh! They need to put it on kindle.

[…] recently, including Eric Frank Russell’s Men, Martians, and Machines, Michael Shea’s Polyphemus, and H.P. Lovecraft’s The Dunwich Horror and Others. As long as I’m on a roll, I figure […]