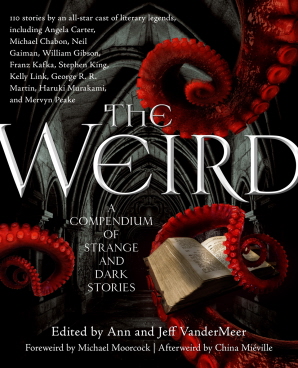 The Weird arrived on my doorstep today, with a resounding thump. And for once, I’m not speaking metaphorically.

It’s about time. I’ve been waiting for this baby since it was first released in the UK back in October. From everything I’d read The Weird looked like the single most important fantasy anthology of the last few years. And now that I hold it in my hot little hands, I’m convinced that impression was correct.

The Weird is a massive 1,126-page survey of the last century of dark fantasy and weird fiction, starting with an excerpt from Alfred Kubin’s 1908 novel The Other Side and ending with K.J. Bishop’s “Saving the Gleeful Horse,” from the March 2010 issue of Fantasy magazine. And I do mean massive — it’s oversize in every way, including an inch wider than normal hardcovers, accommodating a two-column layout that packs a lot on each page.

In between those two pieces editors Ann and Jeff VanderMeer have collected 108 others, from authors including George R.R. Martin (his classic “Sandkings”), Michael Chabon (“The God of Dark Laughter”), H.P. Lovecraft (“The Dunwich Horror”), Stephen King (“The Man in the Black Suit”), Clark Ashton Smith (“Genius Loci”), Fritz Leiber (“Smoke Ghost”), Thomas Ligotti (“The Town Manager”), Kelly Link (“The Specialist’s Hat”), and many others.

The oddest omission appears to be Robert E. Howard, one of the major 20th Century practitioners of the weird tale. Since virtually all of his weird fiction has been recently collected in other venues, his absence here doesn’t bother me. I also miss Clifford D. Simak, C.L. Moore, Leigh Brackett, Edmond Hamilton, Henry Kuttner, Karl Edward Wagner, Manly Wade Wellman, William Hope Hodgson, Roger Zelazny, Ursula K. Le Guin, Theodore Sturgeon, Darrell Schweitzer, Gene Wolfe, Geoff Ryman, Jack Vance, Peter Beagle, and Frank Belknap Long, but I’m not going to pout about it. Editing an anthology like this is all about making tough choices, and I’m glad the editors opted for a lot of overlooked fantasy rather than work that’s been continuously reprinted. Besides, this leaves lots of room for a second volume.

In fact, one of the strongest elements of The Weird is the attention paid to newer authors, including Laird Baron (“The Forest”), Margo Lanagan (“Singing My Sister Down”), Daniel Abraham (“Flat Diane”), Liz Williams (“The Hide”), and Michael Cisco (“The Genius of Assassins”).

I have a couple three of these now and look to be just what I wanted.

Something for people that like ‘Weird stuff’ ( see ‘Genre’
) but are antsy about Wizards, Warriors, Robots, Star Ships + probably Dragons or some such as well.

I think REH is missing because the VanderMeers seem to ignore him. So much so that there is never even been an apology for that, the two simply ignore REH.

It’s nice to see so many ‘foreign’ ( see other than Anglophone ) writers in here, though having actually read nearly every story in this collection already ( yes most of the never-before-butchered-in English-pieces ) I wonder why Jean Ray shows up twice. The only writer to get two slots as it were.

Biggest thorn in my side is the exclusion of Poe.

Edgar Allan Poe died in 1849, and since THE WEIRD really only covers the last century (starting in 1908), it seemed logical to me that he would be excluded.

Since REH is one of the most reprinted authors of the 20th Century, it also doesn’t bother me that he’s excluded. Would have been nice to see him honored here, but since the cost probably would have been excluding a more neglected author, I’m fine with the sacrifice.

M. John Harrison also has two contributions (“Egnaro” and “The New Rays”), both of which are unfamiliar to me. I’m looking forward to reading them.

That’s not a good defense, for leaving out Poe.

So the editors drew some arbitrary line in the sands of time, they moved the goal post so they could ‘legally’ avoid Poe.

This whole thing is founded on cognitive dissonance?

Your statement about REH being heavily reprinted is a good defense until you see that King, Gibson, Martin, and Gaiman are in this.

Yeah this is definitely about the most inaccessible folks in Weird-Tale-Telling.

That being said REH isn’t here ’cause I think The VanderMeers’ just don’t care for him.

And that’s fine with me really.

Whatever gets you through the night.

In the end I find it tolerable even appropriate ( again considering the editors ) that REH is missing.

Oh and any random-motherfucker would do over one of the editors being included, what about this guy Edgar Alan Poe?
I heard some of his shit is passing fair for Weirdness…