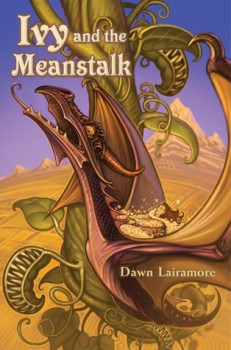 Franchises in young adult and children’s fiction are nothing new. The Hardy Boys and Nancy Drew are only the tip of the iceberg. Among others, E. Nesbitt, Enid Blyton and Edward Eager clearly understood the value of bringing favorite characters back for sloppy seconds (and more), as did authors as diverse as Arthur Ransome (Swallows and Amazons), Gertrude Chandler Warner (The Boxcar Children) and L. Frank Baum (the Oz books). More recent examples come from Susan Cooper, J.K. Rowling, Suzanne Collins and now, Dawn Lairamore, who revives plucky heroine Princess Ivy for another swift tween adventure in Ivy and the Meanstalk.

Lairamore’s first outing was Ivy’s Ever After, in which Ivy made life-long friends with Elridge, the sensitive, almost effete dragon assigned to guard Ivy’s tower prison. In this latest outing, Ivy’s loopy fairy godmother, Drusilla, nearly destroys Ivy’s entire kingdom through the thoughtlessness of having once given Jack (yes, that Jack) a handful of magic beans. The beans grew a beanstalk (yes, that beanstalk) and Jack stole all that great loot from the giant, including the singing harp, which (as luck would have it) was the only thing that could put the giant’s widow (here named Largessa) to sleep. Ivy and the Meanstalk opens over a thousand years later and Largessa is suffering from a mean case of sleep deprivation. Unless Ivy can get Jack’s harp back and use it to lull Largessa into dreamland, the giantess will pepper Ivy’s peaceful kingdom of Ardendale with giant boulders until every farm and castle is smashed flat.

Riding on Elridge’s back, Ivy and trusty stable-boy Owen set off for Jackopia, where Jack’s descendants live in pomp, circumstance and unbelievable wealth thanks to an endless supply of golden eggs. Surprise, surprise, Jackopia’s king is predictably unwilling to give up his honey-tongued harp.

Lairamore has an engaging heroine in Ivy, a tomboy whose heart is always in the right place but whose failure to study up on royal etiquette puts her at a serious disadvantage when dealing with the officious, snobby Jackopians. Indeed, the recurring theme of Ivy and the Meanstalk is its stress on life lessons learned. Drusilla (who really is a fairy) learns that actions do have consequences, Largessa learns to not blame the innocent, and Elridge learns to be less judgmental––of fairies, at least. A lot of people apologize, and if any reader, however young, leaves these pages having failed to glean the message that cooperation is the only way to succeed at anything then they simply aren’t paying attention. A cheerfully moral book, this. But then, so is The Hunger Games––minus the good cheer, that is.

Comparisons to The Hunger Games might not be fair, but they are apt in that Ivy and her fellows are never in serious danger in Lairamore’s hands. They encounter difficulties, yes, but the stakes are not life and death. The questions in the Ivy books are about how Ivy will overcome the obstacles, not whether she’ll die in the attempt. In this, their lineage is very much in keeping with Baum, Blyton and most of the others listed above. Ivy and the Meanstalk will be an ideal, adorable fantasy for those readers not yet tapping into the death-dealing world of adulthood. And there’s nothing wrong with letting our children have their childhood.

__________
Mark Rigney is the author of the play Acts of God (Playscripts, Inc., 2008) and the non-fiction book Deaf Side Story: Deaf Sharks, Hearing Jets and a Classic American Musical (Gallaudet University Press, 2003). His short fiction has been nominated for a Pushcart Prize and appears in The Best of the Bellevue Literary Review, Talebones, and Lady Churchill’s Rosebud Wristlet, among many others, and an upcoming trilogy is slated to begin in Black Gate in 2011. His website, with links to many of his original stories, stage plays and the dreaded Anti-Blog, is www.markrigney.net.