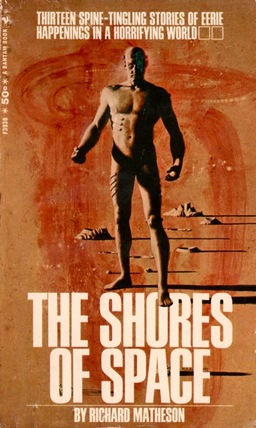 I’ve told you about a few really excellent single author collections recently, including Eric Frank Russell’s Men, Martians, and Machines, Michael Shea’s Polyphemus, and H.P. Lovecraft’s The Dunwich Horror and Others. As long as I’m on a roll, I figure I should continue in the same vein. So this week, I want to talk about Richard Matheson’s 1957 collection The Shores of Space.

Matheson is rightly revered by both SF and horror fans as a genius, especially at short length. He passed away in June, at the age of 87, and was productive right up to the end — with new novels (Other Kingdoms, 2011, and Generations, 2012), collections (Bakteria and Other Improbable Tales, 2011), and even a new movie (Real Steel, staring Hugh Jackman, based on his short story “Steel” from the May 1956 issue of The Magazine of Fantasy and Science Fiction.) That’s damned impressive… the closer I get to 55, the harder I find it just to summon the energy to change channels.

The Shores of Space was Matheson’s second collection (after his groundbreaking Born of Man and Woman, 1954) and it proved very successful, with half a dozen reprintings and new editions over the next 20 years. The last one was in 1979, with an intriguing (and rather purple) cover by Murray Tinkelman. But overall, I prefer the 1969 Bantam paperback (shown at right), with a defiant spaceman standing on a harsh alien landscape, ready to shake his fist at the first person who suggests he put pants on. You show ’em, naked spaceman.

Here’s the back cover copy (it helps if you imagine Rod Serling reading it in a slow, urgent monotone).

A Shattering Journey into the Supernatural

Thirteen extraordinary stories that explore the slippery edge of madness — and beyond — into a chilling nightmare of bizarre and unexplainable occurrences… into a world where unspeakable horror becomes normal — where murky darkness from space works on the minds of men — in a time when creatures of dreadful, unearthy powers can control human beings… and humans create beings beyond their control. Weird fantasy and eerie imagination inspire stories of unforgettable force and unpredictable conclusions!

There’s some pretty good stuff in The Shores of Space. It includes, among many other fine tales, the short story “Steel” that was the basis for Real Steel.

The Shores of Space was published by Bantam Books in 1969. It is 184 pages, priced at 50 cents in paperback. Used copies start at under 2 bucks at Amazon.com. The spiffy cover is by Mitchell Hooks.

…with a defiant spaceman standing on a harsh alien landscape, ready to shake his fist at the first person who suggests he put pants on. You show ‘em, naked spaceman.

And you wonder why your Vintage Treasures column is so popular.

It’s easier when you have great material to work with.