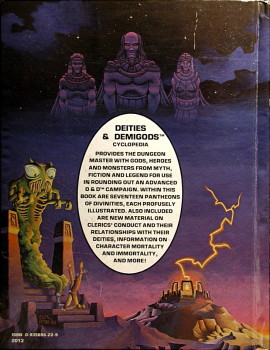 Any collector of older RPG material will tell you that one of the “Holy Grails” is a first edition Deities & Demigods (DDG) from 1980. It is of interest not only to Dungeons & Dragons aficionados, but also to fans of H.P. Lovecraft’s Cthulhu Mythos and Michael Moorcock’s Melnibonean Mythos (not to mention Fritz Leiber’s World Nehwon, home of the greatest sword-wielding duo of all time: Fafhrd & the Gray Mouser). This is because the first edition (actually, the first printing of the first edition) featured gods and characters from all three of those pantheons. Later editions dropped the first two for legal reasons.

A first edition of this coveted tome just went for $56.98 (plus 5.95 shipping) on eBay after 17 bids. The winning bidder was probably ecstatic, because I’ve seen them go for a lot more (I paid more for one myself).

But if you start scouring the listings, you’ll soon notice many first editions being offered for as low as twenty bucks. What gives?

As with the gods themselves, when it comes to DDG, not all first editions are created equal. The Cthulhu and Melnibonean pantheons were pulled midway through the print run of the “first edition” (which throws the normal meaning of first edition right in the shredder, but never mind).

The best tip-off is the number of pages. The one you want has 144 pages; later printings have 128. Some sellers will advertise that they have a bona fide “Cthulhu” edition or that it contains the “Chaosium thank you,” but these are not indicators of veracity.

Here’s why. And this gets a bit convoluted. Actually, an excellent rundown is given at rpggeek.com, which I will just quote verbatim:

According to Frank Mentzer at GenCon SoCal 2003, the printings of this book were referred to internally at TSR as follows:

2nd: Squids with thanks!

6th and later: Legends & Lore (ok, so Frank didn’t mention this part, but the 6th printing is when it changed titles)

The problem with this is that it does not line up with TSR’s own printing info in the books, as the second iteration of Legends & Lore actually said “6th Printing” on the title page. All the versions prior didn’t list any printing info. The most likely explanation is the 1st and 2nd are actually the same printing. It has been said that 1st printing was stopped midway through and the thanks inserted (by order of Brian Blume no less). This is further detailed here. Frank Mentzer implied there were only four printings in the discussion at GenCon SoCal, but did not say so one way or the other directly.

To unpack that terminology used informally at TSR to refer to the various printings, “squids” indicates the Cthulhu pantheon was present. The very first copies to roll off the presses did not have an acknowledgement (“Squids, no thanks!”) because TSR mistakenly thought Lovecraft’s work was in the public domain. [4.22.14 EDIT: Or perhaps not so mistakenly — see comment from DDG Editor Lawrence Schick in the comments below. — Oz] 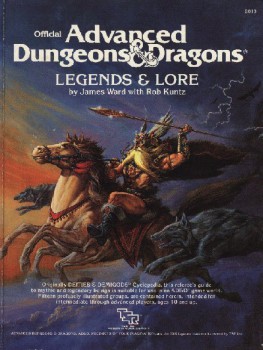 My understanding with regard to the Melnibonean material is that Gygax et al had been given permission by Michael Moorcock to reference his work. Moorcock may have considered it quite flattering that his creations were being incorporated into the Dungeons & Dragons game, and he apparently wasn’t all that concerned about the ins and outs of copyright (things were much more informal in those halcyon days of yore, before everything was bought up by bloodsucking mega-corporations). Unfortunately, he had extended the same courtesy to the folks at Chaosium Games, who had their own Melnibone-based material in the works, and they did care a little bit more that their big competitor was drawing on the same source material. They also were launching their own Lovecraftian game, the famous Call of Cthulhu, for which they had secured legal rights from Lovecraft’s estate. So here was TSR horning in on their licensed products.

In what is again a shocker to our current litigious day and age (when, for instance, such disputes over license ownership have any potential future Dungeons & Dragons films tied up in legal limbo), Chaosium chivalrously gave TSR a nod of approval to go ahead with the material that overlapped with their own, as long as TSR gave them some sort of acknowledgement on the copyright page.

Which TSR promptly did, resulting in the second printing (“Squids with thanks!”), which added this line to the “Credits and Acknowledgments”:

Special thanks are also given to Chaosium, Inc. for permission to use the material found in the Cthulhu Mythos and the Melnibonean Mythos. 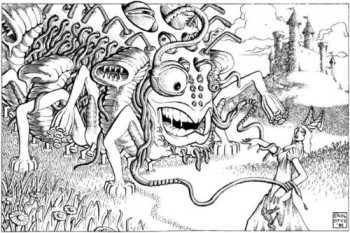 However, it chafed the muck-a-mucks at TSR to have to extend such credit to a competitor, so by the third printing (still listed as first edition!) the compromising pantheons had been yanked. Maybe back in 1980 it wasn’t a sure thing that D&D would be the big game on the block; apparently they didn’t feel secure enough yet in their status as the biggest RPG of all time (whereas twenty years later they would cheerfully roll out d20 Open License and invite all the little game publishers to come play in the 800-pound gorilla’s sandbox).

Here’s where it gets tricky for collectors. No one bothered to scrub the thank-you note from the third and fourth print runs, even though the sections that were being acknowledged were no longer present! (“No squids with thanks!”) So sellers sometimes erroneously offer their first edition DDG as one with Cthulhu and Elric present, based solely on having noticed that they’re referenced on the Acknowledgments page.

I once nearly made an offer on such a deal, but I cautiously sent the seller a question first: “Does your edition have 144 pages?” The seller replied with sincere apologies that his copy only had 128 pages and he promptly took down the listing. It was probably an honest mistake and who wants an item returned along with a negative feedback rating for misrepresenting the item anyway?

Well, that’s about all there is to be said about acquiring an edition of DDG that has the full plethora of promised pantheons. In a future post, I’ll take a closer look at those extra 12 pages and posit the question: Are they worth forking over an extra forty to sixty bucks? Yes, yes they are (if you’re into that sort of thing).

As the editor of the book, I can clear up a couple of points about the Melnibonean and Cthulhu Mythos clusterfrogs. I had, in fact, gotten permission directly from Michael Moorcock to use the Elric material in DDG, which was a naive, n00b mistake: I should have gone through his agent, as Chaosium did, when they made the arrangements for “Stormbringer.” When it comes to rights, agent > author.

Meanwhile, Gary had written to someone he knew at Arkham House (the name escapes me) for permission to use the Cthulhu Mythos. They said yes, largely because even then that mythos was an open-source setting, and they didn’t really have the right to say no. However, Chaosium felt they had acquired the exclusive right to do Lovecraft games, and were willing to fight for it. TSR was not, because they figured the book would sell with or without the squids.

That’s a fascinating bit of history — thanks for sharing it! And I can certainly see how getting permission from Arkham House would have seemed more than sufficient in the case of the Cthulhu Mythos, especially considering how Open Source the entire canon has become.

I paid a little over $100 for my bona fide Deities and Demigods (with Cthulhu and Melnibonean mythos) back in 2000 or 2001. However, the book is mint (or at least as close to mint as an amateur like me is happy with).

I felt I got a bargain. My original Deities and Demigods back in the day didn’t have the sought after mythos and I photocopied them from a friend who did have an earlier printing of the book.

Thanks for sharing this history!

Thanks for filling in some of the details! It’s wonderful to hear additional insight that sheds light on DDG‘s rather convoluted history, and from a primary source no less!

That verifies the general version I’ve heard about Moorcock, i.e., it sounds like he was happy to give permission to anyone who cared to ask — but as you point out, the permission that really counted (from a legal standpoint) was the agent’s!

Also very interesting to hear about the permission granted Gary Gygax from Arkham House. Although I’m not a copyright expert, it squares with my general assumption that by 1980 Lovecraft’s work would’ve been in public domain — and if not, Arkham House would’ve been the logical holders of copyright. So the inserted acknowledgment giving thanks to Chaosium was strictly a courtesy with no real legal obligation.

DDG has to be one of the most interesting and unusual game supplements for ADD. Over the next couple weeks, I’ll be taking a closer look at the content of the book itself, sharing my own reminiscences along with impressions from revisiting the work thirty years on.

True, most copies I come across in near-mint/mint condition do still command prices of over $100.

To find one in the $60-70 range (like the one I bought), you’ll likely be settling for a good to very-good copy that has some wear, perhaps some writing (like the previous owner’s name and phone number) on the inside cover, etc.

This post made me curious enough to go look at which version of the “1st “printing” I had of Deities and Demigods. Turns out I have the 2nd (Squids with thanks!).

Does this mean that 1st “1st printing” is worth more?

Mine is the “Squids with thanks!” edition too. While still rare, it is the easier one to find. TSR must’ve inserted the “thanks” fairly early in the run (although how many more copies were printed of the “thanks” version I don’t know).

In keeping with book collecting generally, the very first printing of the first edition (“Squids, no thanks!”) would be the most valuable; how big the spread is, though, I’m not sure.

DDG presents one of those special situations where there is an extenuating circumstance: many of the folks who want to procure their own copy don’t care about having the first printing so much as they want a copy with the sections that were later removed. This makes the second printing nearly as desirable as the first.

Nick: “many of the folks who want to procure their own copy don’t care about having the first printing so much as they want a copy with the sections that were later removed.”

Completely agree. I’m totally happy with my “Squids, with thanks!” version.