Recently some old friends in Akron, Ohio, turned up a few pages of the pre-TSR homebrew Dungeons & Dragons rules created by Tom Moldvay and me in the mid-1970s. I was delighted to see them, as I thought all of our early collaborative work had been lost to history.

I first encountered Tom Moldvay in late 1973 at a meeting of the Kent State University Science Fiction Club. We hit it off right away, and quickly decided we ought to collaborate on something — we just weren’t sure what.

In early ’74 Tom came back from an SF convention with Dungeons & Dragons in its original white box edition. He DMed a session, I DMed a session, and suddenly we knew what we were going to create together: a fantasy world setting for D&D.

We had both read widely in world history and mythology, and enjoyed a lot of the same fantasy fiction; we traded Lin Carter’s Ballantine Adult Fantasy books back and forth until we’d read them all, as well as everything we could find by Howard, Lovecraft, Tolkien, Merritt, Haggard, Harold Lamb, Dunsany, Hodgson, Machen, and Zelazny.

We were both nuts about Clark Ashton Smith, Tom was a Michael Moorcock and Philip José Farmer fanatic, while I could quote chapter and verse from the works of Jack Vance and Fritz Leiber. So we knew what we wanted to create: a single world setting that would enable us to simulate the fictional realities of these, our favorite authors.

It was going to have to be a big world.

END_OF_DOCUMENT_TOKEN_TO_BE_REPLACED 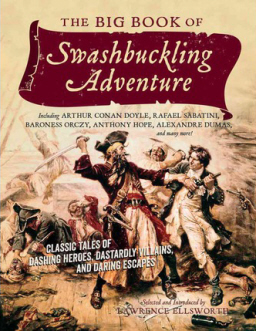 Greetings, Black Gate readers! You may be familiar with my work as the game designer Lawrence Schick – possibly from role-playing material like the White Plume Mountain D&D scenario, video games such as Sword of the Samurai, or my recent work as Loremaster for The Elder Scrolls Online.

But I also write, edit, and translate historical fiction as Lawrence Ellsworth, and in that capacity I have a new title coming out from Pegasus Books, an anthology called The Big Book of Swashbuckling Adventure. Our friends at Black Gate asked me to write an article about compiling that anthology, and here it is.

I’ve been reading and collecting swashbuckling adventure fiction for many years – my whole life, really. A couple years ago, while in the middle of a long (and still uncompleted) translation project, it occurred to me that I probably knew enough about the subject to be able to compile a pretty interesting anthology. The more I thought about the idea, the better I liked it, so I sat down and starting making notes.

I decided the anthology had to meet four criteria. First, it would need to catch the attention of contemporary readers, which meant including recognizable, marquee names, of both characters and authors. Second, it would have to be attractive to mainstream publishers, which meant inexpensive to produce (works in the public domain), and couched in a familiar, saleable format – in this case, a “Big Book,” a fat collection of at least 200,000 words. Third, for variety I wanted a good mix of pirates, cavaliers, and outlaws – and they all had to be cracking good stories that would hold the attention of modern readers. Fourth, not just any stories would do – I wanted carefully hand-picked works that weren’t overly familiar and would re-introduce some of my favorite forgotten authors to the 21st century.