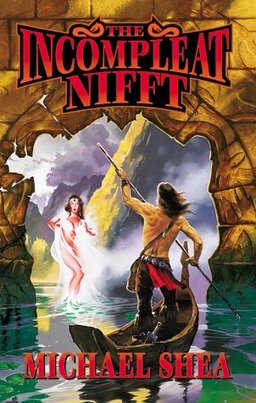 Under editor Eric Flint, Baen Books has led the way in producing inexpensive mass market reprints of some of the most essential classic SF and Fantasy of the 20th Century — including Robert E. Howard, Andre Norton, James H. Schmitz., Murray Leinster, and P. C. Hodgell’s God Stalker Chronicles, among many, many others (They’ve continued in this tradition with fabulous anthologies, including the recent In Space No One Can Hear You Scream and many others.)

In 1997, Baen Books turned to Michael Shea, publishing his second Nifft the Lean novel, The Mines of Behemoth. By 2000, they were preparing to trumpet the arrival of his third, but by that point the original World Fantasy Award-winning volume Nifft the Lean had been out of print for almost two decades.

So five months before the release of The A’rak, Baen bundled both of the first two novels into a single paperback, cleverly titled The Incompleat Nifft, signally the impending arrival of the what would be the final book in the series. At 576 pages it was a terrific bargain, collecting both Nifft the Lean and The Mines of Behemoth under a Gary Ruddell cover, and it has become perhaps the most collectible paperback in Shea’s catalog.

This Time, They Would Make a Killing

Join master thief Nifft the Lean with his companion-at-arms, mighty barbarian Barnar Hammer-Hand, as they trust to their wits and their luck. Once Nifft and Barnar were hired by the ghost of a dead woman to kidnap the man who betrayed her and drag him down to hell to join her. A simple task — or so they thought at first…

Another time, the pair lucked into an even more lucrative proposition, when they were shipwrecked on the way to work in Costard’s sap mine — very dangerous and sometimes nauseating work far below ground — and were hired by Bunt to bring back twenty gills of the ichor exuded only by the monstrous insectile queen. It seemed like easy money — they wouldn’t have to go to hell Of course, the best laid plans sometimes do go astray, but this time they were sure they would… make a killing.

In addition to the two novels, this volume also includes the introduction by Tim Powers that originally appeared in The Mines of Behemoth: “Running Away with the Circus: An Introduction to Michael Shea’s Nifft the Lean.”

The Incompleat Nifft was published May 2000 by Baen Books. It is 576 pages, priced at $6.99. The cover art was by Gary Ruddell. There is no digital edition and it has never been reprinted. I usually report that most vintage paperbacks can be acquired for less than the price of a new paperback, but this is one of the rare exceptions. Prices are hard to gauge, as it’s tricky to find copies. 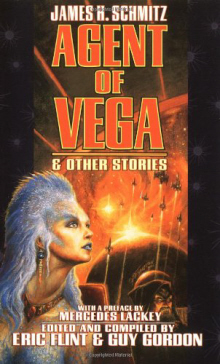 I’m looking forward to your post about A Quest for Simbilis. I think the book has generally been overlooked, seen as either a simple pastiche lost in the shadow of the work it celebrates, or as the forgetable first steps of the author Shea was to become.
It deserves better. I don’t believe it is a great book, but there is greatness in it.

I bought this and The A’rak when they were new, not thinking that they would become so collectible. I just wanted to read them. The fact that they’re so hard to acquire nowadays just highlight a valuable lesson for all of us – buy everything. Buy it now.

>buy everything. Buy it now.

This is the precept by which I have tried to live my life.

Same here, Joe, and my wife is getting pretty damned tired of it.

Then again, I just blew a thousand dollars on bookshelves at Ikea, and I’m in my third day of unpacking book boxes in my new study.

Buy everything, buy it now, and subscribe to the Bookshelf-of-the-Month Club?

@emcgargle and Joe H: Is there a support group we can join for this? I’m frequently in the doghouse myself after one of my used-book spending sprees.

@Sarah: I could use some of your shelves.

[…] monstrous settings and characters similar to those of Clark Ashton Smith or Michael Shea’s Nifft the Lean stories. But he writes without the drugged dreaminess of Smith or the sly wit of Shea. For all the […]