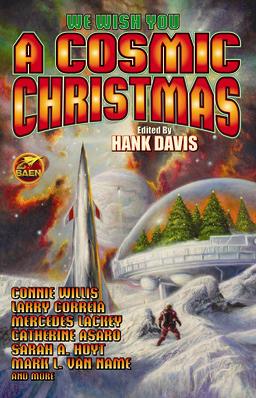 I admit it — I love Christmas stories. Some of the finest fantasies ever told — including Charles Dickens’s A Christmas Carol and Frank Capra’s It’s a Wonderful Life — have been Christmas stories. It’s a great time of year to curl up in my big green chair with a cup of hot chocolate, a cat in my lap, and a Christmas fantasy in hand.

One of the better Christmas anthologies I’ve stumbled on recently is Hank Davis’s 2012 A Cosmic Christmas, which celebrates twelve cosmic days of Christmas with a dozen tales of vampires, robots, A.I’s, alien invasions, and stranger things, from the hills of Appalachia to a high orbit space station. It includes a novella by Catherine Asaro, a Jon & Lobo story by Mark L. Van Name, a John the Balladeer tale from Manly Wade Wellman, a Venus Equilateral story by George O. Smith, a Grimnoir Chronicles novelette by Larry Correia, a Technic History story by Poul Anderson — and a brand new novelette by Sarah A. Hoyt.

Joy to the world… or, joy to the worlds! Let heaven and nature — and also the supernatural — sing. A Cosmic Christmas presents twelve stories of Christmas in very unusual circumstances, ranging from vampires to robots, from the hills of Appalachia to a high orbit space station, all celebrating the holiday in their own, off-beat ways.

New York Times best-selling author Larry Correia sends his popular tough guy detective and magicwielder, Jake Sullivan, on a special case, while visions of tommy guns dance in the heads of the thugs he’s up against. Mark L. Van Name’s Lobo, an A.I. housed in a pocket battle starship, drops his usual cynical pose when challenged by a troubled family at Christmas time. Nebula Award-winner Catherine Asaro tells of a romantic weekend that turns into a mystery in a futuristic high-tech house — all that and Christmas, too. Mercedes Lackey delivers a ghost story with a not-so-friendly visitation from the beyond, and George O. Smith, a star of the Golden Age of science fiction, is on hand with an episode from his classic Venus Equilateral series, in which a Christmas celebration on a gigantic space station is interrupted by the arrival of a ruthless interplanetary criminal, who didn’t drop by to hand out presents. And much more, in a holiday package that any fan of science fiction and fantasy would be delighted to find under their tree, on any planet. 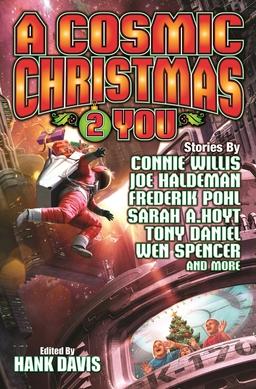 A Cosmic Christmas was edited by Hank Davis and published by Baen Books on November 6, 2012. It is 312 pages, priced at $12 in trade paperback and $9.99 for the digital version. The cover is by Bob Eggleton.

Another classic Christmas tale of the fantastic is Roads by the old hand of Weird tales, Seabury Quinn, which purports to tell the origin of Santa Claus. (He started out as a Roman gladiator, if you didn’t know.)

Thomas — it’s in there! Second story from the bottom. 🙂

Ah – I missed it. It’s a really, really strange story, as I guess it would have to be.