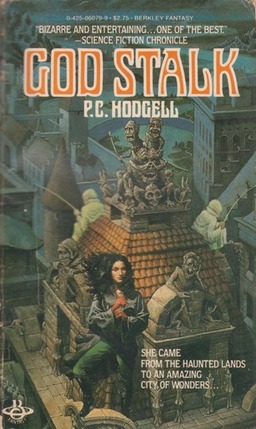 Out of the haunted north comes Jame the Kencyr to Rathilien’s greatest city, Tai-Tastigon. From the hills above, the city appears strangely dark and silent. She arrives at its gates with large gaps in her memory and cat claws instead of fingernails. She’s carrying a pack full of strange artifacts, including a ring still on its owner’s finger… and she’s been bitten by a zombie. Wary, but in desperate need of a place to heal, Jame enters the city. So begins God Stalk, the first book in P.C. Hodgell’s Kencyrath series and one of my absolute, bar none, don’t-bother-me-if-you-see-me-reading-it, favorite fantasy novels.

When this book first came out in paperback in 1983, my friend Carl bought it at the original NYC Forbidden Planet on 13th Street. Raving about it, he tossed it to me. Then I passed it to someone else. By the time it finished its circuit through the rest of my friends and back to its original owner, its cover was bent, stained, and more than a little torn. I’ve gone through several copies myself over the years, having lost or upgraded it multiple times. When I reread it this past week, I was excited that I enjoyed it as much as, if not more than, I had in the past. I’m so grateful Carl gave me this book thirty years ago. P.C. Hodgell seems so far below the general fantasy radar, I don’t know if I would have ever heard of her at all, which is pretty darn shameful.

The Kencyr are a group of three races sworn to the service of the Three-Faced God and bound together by him to fight Perimal Darkness, a warping force of chaos and evil sweeping over the planes of existence. The rulers of the Kencyr are the human-looking High Born, of which Jame is one. The warriors and artisans are the Kendar, still human-looking but larger and longer-lived. Finally, there are the giant catlike Arrin-Ken, the judges.

As Jame remembers bits and pieces of her missing life, an eons-old struggle against the Darkness is revealed to the reader. The Kencyr fled to Rathilien three thousand years ago after betrayal at the highest level almost led to their extinction. Jame may have an important place in the war and among her people, though every answer leads to another question, some not answered until much later in the series.

The history of the Kencyr and their endless war are really only the background for God Stalk. This novel centers on Jame’s adventures during a year in Tai-Tastigon. From the night of her arrival during the Feast of the Dead Gods, her residency in the great city is one of constant action and intrigue.  She has entanglements with bandits, thieves, innkeepers, and deities. It’s a dangerous place, but also enticing.

Debating whether to stay or leave, Jame thinks:

Cruel, cruel city with its gleaming snares and velvety paws, its eyes that shone up steadily at her even now, watching, waiting. And this was the place she thought to call her home? Yes. Its temper suited her.

The Kencyr are monotheists, believing that any other gods are merely “shadows of some greater power that regards them not.” Confronted by what appear to be divine beings during her very first moments in Tai-Tastigon, Jame spends much time puzzling over their true nature. The Kencyr have not heard anything from their god in thousands of years and feel betrayed. If their god’s claim to sole divinity were proven untrue, it would mean that everything the Kencyr believe is rooted in a lie. To discover that the ancient laws by which they live are baseless would devastate an already faltering people.

Jame’s one of my all-time favorite characters. As much as she’s given to rash attacks and undertakings, she’s very much a thinker, constantly observing and trying to work out what’s going on and why. Honor and loyalty are practically built into the genes of the Kencyr, but Jame is not content to let these traits go unexamined. She possesses a high degree of empathy that allows her to not only build a new life among strangers, but also to try to understand even some of her worst opponents. She will do what must be done in the face of evil, but tries to understand what the true cost to herself and others will be.

The question of home and belonging is a major theme of all the Kencyrath books. Jame labors over her place in Tai-Tastigon — her place anywhere on Rathilien. Much of the story is about her insights and how she comes about them. As her amnesia lifts, she comes to wonder if she might be an outsider even among the Kencyr. In the sequels, this theme becomes even more prominent as Jame returns to her people and faces the Kencyr expectations for High Born women, as well as what the Three-Faced God seems to have planned for her.

For a book set in a world where all-destroying chaos is lurking just over the universe’s threshold, there’s a lot of humor in God Stalk. Some of its funniest moments come when Jame tests her hypothesis about the city’s deities on a god of lamentations and his sad-sack priest. Sometimes the humor’s slapstick, others it’s a little more visceral. Put to work in the kitchen of the inn where she lives, Jame is taught a simple bread-raising charm. At first her efforts seem successful:

Jame’s rose in five minutes. When the widow sliced into the baked loaf, however, they discovered that its sudden expansion had been due to the growth of rudimentary internal organs.

There’s a joyful creativity to Hodgell’s writing: the residents of the Kingdom in the Clouds who never descend below the rooves and attics of Tai-Tastigon; a god who scatters flyers proclaiming “Nurk Lurks in Doorways”; Jame being chased by one god who manifests as bottomless cracks in the street and escaping over another like a sea monster which has surfaced in a a two-inch deep puddle. Tai-Tastigon is a city filled with mazes, it’s founding citizens being described as having a culture built on puzzles, “social conventions and all, and the highest form of art was the labyrinth”.

One of the objects of Jame’s thieving talents are the Peacock Gloves, embroidered “with threads gleaned over a lifetime from the floor of the city’s finest textile shop”. At times, it’s almost too rich, every page bringing new color to Tai-Tastigon and its citizens. Yet this never undermines the more serious themes of the book. Instead it serves to breathe real life into a fantastic setting.

God Stalk is also exciting. Did I mention that? There are knife fights, combat dancing, soul devouring, and fights with demons and detached souls. In order to prove her skills to her fellow apprentice thieves, Jame undertakes one of the most daring escapades in Tai-Tastigon’s history. There are several chases through maze-like streets and races over rooftops. There are quiet, even contemplative, moments, too, but when the action comes it’s a blast.

If Tai-Tastigon’s god-ridden streets, warring sects, and thieves’ guild are reminiscent of Fritz Leiber’s Lankhmar, it’s not accidental. Hodgell invented the character of Jame and the history of the Kencyr years before she committed them to paper, but when she finally decided to write a novel, she deliberately chose to place Jame in a Leiberesque setting. From what I understand from her own comments, Hodgell was still getting a handle on how to best present the epic fantasy world she had created and decided to do it in a comfortable and approachable way. While no single element of God Stalk is wholly original, none ever feels stolen or stale. That Hodgell succeeded so well is a testament to her talents. 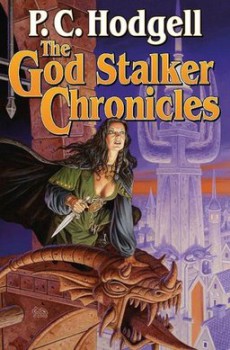 Following God Stalk came the 1985 sequel, Dark of the Moon. Hodgell then stopped writing for several years to pursue her post-grad degrees (and I was very sad). It’s taken nearly thirty years for the next four books to appear: Seeker’s Mask, To Ride a Rathorn, Bound in Blood, and Honor’s Paradox. They’re much more epic fantasy than swords & sorcery, but don’t let that deter you.

When she began to write about Jame again in the 90s, she found her original publisher was no longer interested. Eventually, she found homes at one small press and then another, but they both failed, leaving her books homeless and her advances unpaid. Finally, she found a new home with Baen. When I discovered that not only were there new books, but that they’d be published, I was stupidly excited.

In so many ways, Baen is obviously great for Hodgell — her books are all in print and in bookstores. However, if you want to read about the frustration over an author’s vision of her character versus a publisher’s, visit her site and read about her struggle to get appropriate cover art (she’s only recently appeared to be successful). Jame is a young, wiry teenager so flat-chested she’s often mistaken for a boy. Never a buxom thirty-five-year-old (as seen at left). Even shirtless, her near-sighted thief master doesn’t realize she’s a she. It’s a fascinating insight into how a female character is marketed, even when much of her audience appears to be female (which I gather from reading comments at Hodgell’s website).

Don’t let the lamentable cover art deter you.  P.C. Hodgell’s God Stalk and its sequels are some of the best fantasy novels of the last thirty years.

God Stalk was originally published in May 1982 by Berkley Books.

You’ve reminded me that I really, really, really need to go back and reread this series (including the last couple of books, which I haven’t gotten around to yet).

Just bought a copy of the God Stalker Chronicles for my Kindle based on your article here. Thanks for the recommendation.

@ Joe H – I know, what was I thinking calling out a Baen cover? Seriously, though, they know the audience for a lot of their books, so it must work for them most of the time. How different, really, is it from romance covers? It’s all a weird sort of wish fulfillment at work. With Hodgell’s books,though, it’s just nutty.

@W King – I really think you’ll like it, but let me know. I’m rereading the second book, Dark of the Moon at present and hope to work my way through the rest of the series over the fall.

Yeah, Baen seems to have carved out a niche for itself in which it’s doing very well.

I picked this book up when I was 13, and I’ve longed to visit Tai-Tastigon ever since. The city was an even more compelling character for me than Jame was, so I keep hoping Jame will journey back there. That said, Jame is a great character in a unique predicament. Good on Baen for picking the series up.

@ S Avery – Hodgell’s written that at some point Jame will have to return to Tai-Tastigon. As much as I like the later books, I’m looking forward to that return myself.

[…] grabbed P. C. Hodgell’s God Stalk on the basis of the review Fletcher Vredenburgh’s review of it over at Black Gate.  Keneth Bulmer wrote the Dray Prescott series of sword and planet novels under the […]

[…] I’ve become certain that P.C. Hodgell is my favorite author still alive and writing. From God Stalk last year, to Dark of the Moon and Seeker’s Mask this, it’s been exciting to discover […]

[…] are links to his previous reviews — God Stalk, Dark of the Moon, Seeker’s Mask, To Ride a Rathorn, Bound in Blood, and Honor’s […]