“Just once, why can’t we have a simple crisis?”

Jame from Dark of the Moon 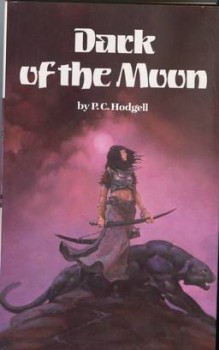 P. C. Hodgell’s Dark of the Moon (1985), a swift-paced dual narrative of twins Jame and Tori Knorth, is the sequel to her awesomely-amazing-why-haven’t-you-read-it-yet first novel, God Stalk (see my Black Gate review here). Jame, heroine of the first book, is racing into the west to find her brother while Tori, High Lord of the Kencyrath, is racing south to bring his army to bear on a threat that could destroy the world.

Hodgell wrote God Stalk as an introduction for her heroine Jame and to be sure she could write a full-length novel. To ease readers into the complex and madly elaborate world of Rathilien, she set it in the deliberately Leiberesque city of Tai-Tastigon. Like Leiber’s S&S, Hodgell’s moves easily from the grim to the funny and back without dissonance in an intimately scaled, fantastical urban playground.

But Hodgell had already planned a story of vaster scope about Jame and the Kencyrath which is only hinted at in God Stalk. The Kencyrath were bound to their god in order to fight Perimal Darkness, the embodiment of evil and chaos, and had been waging that battle for millennia. The war and the consequential flight of the Kencyrath to the world of Rathilien is always lurking beneath the surface of the story, but it’s never the driving force, the focus being on Jame’s adventures and efforts to understand the true nature of the world’s gods.

With Dark of the Moon, Hodgell and Jame leap out of the familiar shallows of Tai-Tastigon and its plethora of cults, sects, and secret societies, into the depths of full-blown epic fantasy. The ages-long struggle against Perimal Darkness moves to center stage and Jame emerges as possibly the most important figure in the war.

I’ve read that some fans of God Stalk were put off by the epic scale of Jame’s new adventure. I admit that in 1985, when I first read DotM, I was a little disappointed when I realized that Tai-tastigon was fading behind her, but within a few pages Hodgell had me hooked. High in a snowy mountain pass, Jame and her companions are confronted by something like a nasty pack of wolverines, a shapechanging enemy out of legend, and wonderfully miscast magic. This book charges into motion and never lets up. This is my fifth or sixth reread of this book and it thrills every time.

Jame and her twin brother Tori are the last members of the ruling house of the Kencyrath. They were born in the Haunted Lands, the region closest to encroaching Perimal Darkness, where their father had gone into exile with his household. There he went mad and fathered these two children with the second most hated Kenycrath in all history.

At the age of seven, when Jame showed signs of being a Shanir — someone touched by the Kencyrath’s god — she was driven out of the house by her father. She ended up inside Perimal Darkness and in the hands of her ancestor Gerridon, the Highlord responsible for the near extinction of the Kencyrath three thousand years earlier. There, she aged at half the pace of her brother and learned several dark and dangerous skills, including how to steal a person’s soul with a dance.

At 15, Tori fled his father’s rages and increasing insanity and escaped into the Riverland, the realm of the Kencyrath. There he secured an alliance with one of the more powerful Kencyrath houses and distinguished himself in battle. When he came of age, he revealed himself as his father’s heir and was made High Lord.

Within days of fleeing Tai-tastigon, Jame is being hunted by three-thousand-year-old enemies of the Kencyrath. After a cease-fire lasting three milennia, Gerridon and Perimal Darkness are on the move again. New schemes are revealed and Jame, to her horror, realizes she is at the heart of all of them.

Behind her, beyond the firelight, someone chuckled softly. “Jamethiel!” called a husky, sweet voice from the darkness. “Child, I’ve come for you.”

Jorin backed into Jame, the fur down his spine rising. She felt her own scalp prickle. Whatever was out there, it knew her real name, and she almost felt she knew what to call it, too. Where had she heard that loathsomely familiar voice before? Not in Tai-tastigon, not at the keep… 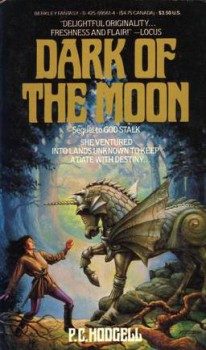 Tori’s position is threatened by the machinations of powerful men desiring control of the High Lord position for their own houses, as well as a limitless horde of man-eating, Darkness-tainted barbarians.

The 370-page book, covering only three-and-a-half weeks, maintains all the strengths of Hodgell’s first novel and transfers them to a wider, more elaborate canvas. Where before she gave us a magical city, she’s now presented us with a magical world. The very dirt breathes with sorcery and the ancient trees in the oldest forests stir with a strange, wild life:

He stepped up to another tree covered with what looked like a myriad of small cocoons. “Here’s something rarer, though. It’s called a ‘host.’ Watch.”

He rapped its trunk lightly.

All the cocoons burst open. A flurry of pale green new leaves leaped into the air and vanished, golden veins flashing, into the upper mist.

“But when will they fall?” asked Jame, staring after them.

“Not until they reach their winter host tree far to the south. They’ll come back in the spring…”

There are more characters to get to know than before. Instead of a few Kencyrath out of water like Jame, the entire race and its culture are explored. Bound to their god and their war, they are held together by the punishing demands of an elaborate system of honor and obligation that maintains their uniqueness on an alien planet. As warrior monotheists in a world of polytheists, they come across as something like Jewish samurai knights. Hodgell does a tremendous job of building and slowly explaining Kenycyrath society. Rather than diverting from the story to explain mores and folkways, they are introduced and later elaborated upon as needed to serve the plot.

Some of the Kencyrath have come to see the system they live under as corrosive but unchangeable. That tension, introduced in God Stalk, takes greater prominence in Dark of the Moon. Some of the Kencyrath have broken under the weight of their customs and others have bent them to exploit others and seize power. In this book, Hodgell lays the groundwork for conflicts that will become more important in the later novels.

A screaming wave of Wastelanders had charged in among the leveled spears and hit the shield-wall.

They swarmed up over it. The first across died on the defenders’ swords, entangling them, and the next wave crashed down alive on the far side. Harn swept the Prince behind him. His own shield was only a buckler strapped to his forearm, but it served to turn aside the Wasters’ weapons of stone and bone while his own axe cleared a bloody arc before him.

She slips into the role of epic fantasy world- and plot-builder with grace and ease. She does BIG very well, but never lets it overwhelm the subtlety of her characters’ interactions and concerns. The cast is kept manageable and there are no extraneous sideplots with tertiary characters as filler and distraction.

Even in the face of all the great new things Hodgell introduces in Dark of the Moon, the heart of this book remains Jame, cat-clawed, skinny, and foolishly headstrong. It’s not that I kept hoping that the non-Jame parts would hurry up and be done, but I wanted Jame back. In my review of God Stalk, I wrote that Jame’s one of my favorite characters in fiction and rereading DotM reinforced that opinion.

Jame is impatient, dangerously curious, and loyal to a fault. Proof of Hodgell’s tremendous talent is that every time Jame seems poised on the brink of Mary Sue territory she doesn’t fall in. She screws up and makes foolish mistakes all over the place. We’ve all seen authors lose control of their heroes and succumb to the worst sort wish fulfillment. Hodgell’s avoidance of that is critical to making Jame such a great character.

Too many fantasy characters are flat, seeming not much more than a few checks on a list of standard hero traits. Others, their creators tell us, are charismatic, but when read actually come across as repulsive. Jame suffers from neither of those failures. For thirty years, she has held my attention and dragged me along as she fights, sneaks, and pratfalls her way into and out of trouble. As the quote at the top of the page should make clear, Jame endlessly finds herself in one perilous jam after another. Watching her try to extricate herself is a nonstop blast.

There’s a moment late in the book when Jame comes across the skulking servant of a Kencyrath princess and at once gets him involved in dangerous affairs he would never have ventured into before. Though he suspects she’s quite mad, he joins her mission until:

Graykin regarded her with astonishment. “Why, you really don’t know what you’re doing, do you?”

“Very seldom,” Jame admitted with a sudden wry grin. “If I did, I probably wouldn’t be doing it, but as far as I can see, the alternative is to spend the rest of my life standing in a corner with a sack over my head. I’m serious about Lyra, by the way. Watch out for her. She may be a cruel, stupid child, but she’s one of us. See you later  —  I hope.”

She walked into the shadows.

I know I’ll be tagging along on every mission to come.

Dark of the Moon is readily available in all sorts of cheap used editions, as well as a recent omnibus with God Stalk from Baen.

Hodgell is a longtime favorite of mine. I got my first copy of God Stalk at a mall Waldenbooks when I was 13, and I think that’s about how many times I read it. I’ve only read two of the subsequent volumes, so I’ve got a treat ahead of me. So glad Hodgell found a new publisher!

I still pine for Tai-Tastigon.

On her site, Hodgell has written that Tai-tastigon is one of the things her readers really want her to revisit at some point. I’m really looking forward to catch up on this series this year.

When I saw that she had a new book out, I was sorely tempted to devote several weeks of the Series Series to starting at God Stalk and catching up. If you write your way through it, I’ll probably be reading in parallel with you.

That’s cool. I’m very interested to see what you have to say about the series.

I’m not planning to review it in parallel. I’ve got a queue of review copies that need my attention. But if you review your way through it, we’ll at least have each other to converse with in comments.

[…] that P.C. Hodgell is my favorite author still alive and writing. From God Stalk last year, to Dark of the Moon and Seeker’s Mask this, it’s been exciting to discover how well they’ve held up […]