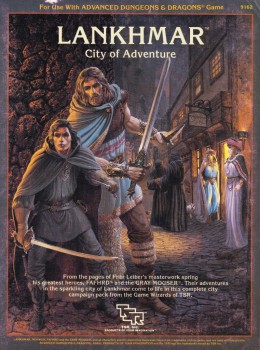 I, like many folk of my age, category, and interest set, have many fond memories of Waldenbooks. I mean, as a kid there were basically two things you could be guaranteed were fun at any U.S. mall: Kay-Bee Toys and Waldenbooks. They were two oases in a desert of clothes outlets and anchor stores that your mother dragged you to on far too many occasions. Still, being able to go to those two stores somehow made it all worthwhile and I weep for the youth of today (and myself for that matter) that malls have now become all clothing & eateries, as both those wonderful chains are gone forever.

Yet I digress, as I’m writing today to speak a bit about a book I well remember purchasing at Waldenbooks back in probably 1987 (although the book’s production date is 1985). This gaming campaign setting, Lankhmar: City of Adventure, was produced by TSR after it acquired the license to Fritz Leiber’s Fafhrd & Gray Mouser universe and it does an admirable job detailing the base game mechanics for driving a square peg (Swords & Sorcery) into a round hole (Dungeons & Dragons).

I was too young at the time to properly see this problem and simply enjoyed the game for what it was, another cool setting to have my characters visit (and more importantly steal Nehwon Throwing Daggers, which did 1D6 damage instead of the 1D4 of normal D&D daggers). This was also one of the more interesting cities designed by TSR, in that it is not only huge, but it has a series of square ‘blocks’ that are empty in the map and can be filled in by the DM to customize the city to your personal campaign.

Still, as I look at this large 95-page supplement today, I’m saddened by the thought of what could have been if this kind of development and money had been focused in the right direction. To me, Lankhmar falls well short of the mark because the world of Leiber is inherently NOT D&D, and therefore trying to statistically recreate Fafhrd & Mouser, or anyone or anything else in that universe, is going to fall dramatically short. It is for the same reason that Pete Fenlon developed Rolemaster, and thereafter Middle-Earth Role-playing, because he couldn’t play the world of Tolkien using the table-top mechanics of Gygax’s gaming opus, D&D. 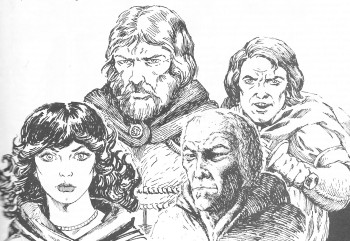 The same can be said for the artwork of this book. Although it is covered by the great Keith Parkinson and fully illustrated by Jeff Easley, the two artists are intrinsically D&D in their design and style, and they fail miserably to bring classic pulp swords & sorcery to life in this book.

When you think Lankhmar, you should being seeing lithe rakes and muscled barbarians with half-naked women at their sides. It is the realm of Frazetta, Boris, or Kelly, and as good as Parkinson is, his cover might as well have been on a random Dragon Magazine as on this supplement, meant to depict such a lush and pulp-filled world. Now, hiring Frazetta might offend a large group of mothers and tank your product sales, but it doesn’t mean it isn’t the ‘right’ thing to do when honoring a license. 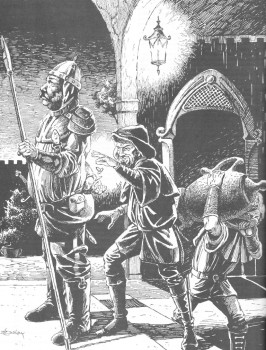 Easley is no better because by this point he is… well EASLEY! His work is also rushed, static, and uninspired, as though doing black and white illustration (which he’d begun with such flare in The Red Box or The Lost Caverns of Tsojcanth) wasn’t in his job description anymore.

I blame this not on Jeff’s talent or mindset, but simply on his overuse in ‘the pit’ for whatever project needed done ASAP, as well as the fact that by this point he was D&D and all his work reflects that game.

All said, TSR’s Lankhmar: City of Adventure is really more Greenwood’s Waterdeep than Leiber’s Swords & Sorcery classic, and that should make all gamers sad. Sure, someone with epic knowledge of the fiction could correct the feel through role-play and description, but you’d still have to look at that Parkinson cover and try to negotiate exactly how Mouser was a 3rd level magic-user, and in the end be spoiled by it all.

I hope that someday this setting gets a reboot that doesn’t reflect the current style of gaming art, but instead creates a throwback homage to both art and mechanics, but only time will tell if that ever occurs.

I think D&D’s thief class, as well as Tunnels & Trolls’ rogue, were supposed to be based on the Gray Mouser.

One problem with simulating fiction is that, in fiction, characters’ supposed abilities are often at odds with their results. That is, they generally survive, but their survival is often a ‘surprise result’.

I nominate Savage Worlds for a Leiber licensee.

Savage Lankhmar… yep, I like the sound of it, plus Pinnacle wouldn’t shy away from sex, the combat system is geared toward heroes slaying multiple foes, and the magic system can be easily modded to accommodate Leiber’s sorcery. I like it!

What are your thoughts on the Paul Jaquays’ (and a little Jeff Dee’s) artwork of the “Newhon Mythos” chapter in the old TSR Deities and Demigods book? It’s not Franzetta, but do you think it captures the Lankhmar spirit of Leiber’s books?

I guess Leiber himself shares some culpability in this regard, although there were extenuating circumstances. My brother – a big Fritz Leiber fan – says there were only a limited number of ways in which Leiber could actually generate a steady revenue stream from the stories (D&D being a case in point) and that he was actually pretty hard up financially. I’m guessing that when you sold the story, you also sold the copyright. On the plus side, you kept the rights to the characters and the basic concept.

James, and excellent question! I was wondering if anyone would be bringing the Deities & Demigods version up! Indeed, I think Jaquays did some of his finest D&D work in that book [and very early considering he doesn’t show up again until the late 1980s], and Dee was at his height, so no complaints there. What impressed me about this take was that it reflected more of the 1970s comic format and that does remind one of the high adventure of S&S. There was also more sex in those images, and a lithe quality to the body structure that befits rogues and the lean life of an adventurer. I applaud the Deities & Demigods style for the setting and would have certainly preferred it.

Aonghus: That makes perfect sense, and considering Chaosium produced the Stormbringer RPG and didn’t give Moorcock a dime for it, even if you owned the rights you might not get paid.

Scott, glad you approve of the Jaquays’ art.

I have to admit that I came to this backwards. I was familiar with the Deities and Demigods book first and read Leiber’s stories later. In fact, I often had the TSR mythos book at my side when encountering new characters or monsters in Leiber’s stories.

So, for me, the Jaquays’ art is definitively how I think of the Newhon stories.

(I love Jeff Dee’s 80s work, but he only did a couple or so small illustrations for the Newhon chapter.)

If the TSR art bothers you, save your sanity and avoid looking at the art in the Lankhmar supplements produced by Mongoose! I wish Design Mechanism would do a supplement. They do very good art and the game system is a good fit, although they would need to stop being so uptight about certain things in order to reflect the very unPC world of Newhon.

Tyr: I had no idea Mongoose had done Lankhmar, but I guess it makes sense since they did Conan. Still, I thought their Conan D20 was pretty dead on, and they never backed away from being as sexy as Howard portrayed his world. Now I don’t know if I should have a look or not! 🙂

James Hutchings said: “One problem with simulating fiction is that, in fiction, characters’ supposed abilities are often at odds with their results. That is, they generally survive, but their survival is often a ‘surprise result’.”

That’s a point I’ve also pondered in reflecting on adapting fictional characters to specific games. Consider the members of the Fellowship in LOTR who wade through armies of orcs and come through unscathed. What level fighter would Gimli have to be; what level ranger Legolas; in order for that to be a foregone conclusion in a D&D campaign? 16th? 18th? At some point it breaks down and just doesn’t make sense.

In Deities and Demigods, the main-class levels for Fafhrd and the Gray Mouser were up in the teens, yet I recall a Leiber story in which they were somewhat challenged by how they would take on a party of five mercenaries (in D&D game terms these mercenaries would be low-level fighters) because they would be so outnumbered. If it were a D&D campaign, characters with levels that high wouldn’t have to think twice about tackling two or three times that many low-level foes (D&D was obviously never primarily concerned with realism — you get to a certain level and you can waltz through an army of goblins and they just won’t touch you; with your armor class you may as well be Sue Storm of the Fantastic Four surrounded by her force field).

Pinnacle now has the licence for Savage Worlds Lankhmar. This is from pinnacles website : “The Savage World of Lankhmar brings Fritz Leiber’s gritty world of urban fantasy into Savage Worlds, shepherded by Tim Brown (of Dark Sun and Dragon King fame) and our own Shane Hensley (who wrote the Lankhmar boxed set for TSR back in 1997)! Watch for Lankhmar: City of Thieves, detailing the city itself and its most important players—including Fafhrd and the Gray Mouser. Savage Foes of Nehwon brings you the most insidious threats—powerful sorcerers, terrible creatures, and ruthless villains—with adventure seeds and Savage Tales to really fill out a campaign. Savage Tales of the Thieves’ Guild is a thematically linked series of adventures that can be run individually or knitted into a Plot Point Campaign of their own, all churning around Cheap Street’s activities. And watch for accessories like premium metal miniatures and the Lankhmar Game Master’s Screen, too.”