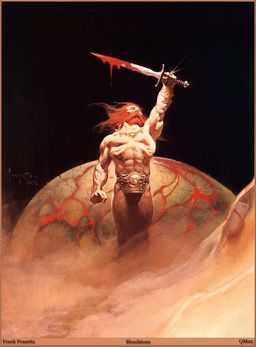 By my count, I published forty-two articles here at Black Gate during 2014. I reviewed thirty-two novels and over forty short stories.

While most of the books were older ones [e.g. The Eternal Champion (1962) and Year of the Unicorn (1965)], I did manage to sneak a few newer ones into the mix, as you’ll read below. The short stories, all from presently publishing magazines, reinforced my belief that there’s a continuing renaissance in swords & sorcery. There are talented authors toiling away despite the lack of commerical interest. I hope I convinced other S&S fans to investigate these books and stories and learn for yourselves how much good heroic fantasy is out there waiting for you.

As I’ve written in the past, one of my initial reasons for blogging about S&S was to get myself to read many of the books I had missed or neglected over the years. I managed to accomplish a lot of that this year.

Two-thirds of the books I read were brand new to me. Among the older ones were Darrell Schweitzer’s strange and intoxicating Echoes of the Goddess and Adrian Cole’s phantasmagorical Oblivion Hand. I’m very happy I finally read Keith Taylor’s great Celtic S&S book, Bard, as well as Teresa Edgerton’s The Queen’s Necklace. The best contemporary books I read were the densely constructed The Constant Tower by Carole McDonnell, and sword & soul founder Charles R. Saunder’s brand new Abengoni: First Calling. 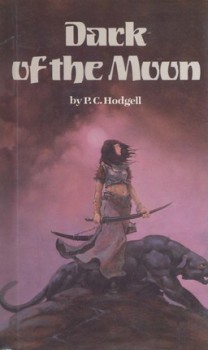 In examining the books I revisited I saw no unifying thread except I think most of them are pretty good. If you haven’t read Tim Powers’ The Drawing of the Dark, or his buddy James Blaylock’s The Elfin Ship, you need to. The same thing goes for Teresa Edgerton’s delightful Goblin Moon.

The most important thing I’m taking away from the reread books is that I’ve become certain that P.C. Hodgell is my favorite author still alive and writing. From God Stalk last year, to Dark of the Moon and Seeker’s Mask this, it’s been exciting to discover how well they’ve held up and the many new things I discovered this time around. I read them in fairly quick succession this time and, read like that, Hodgell’s intricate plotting and complex relationships become clearer and more compelling.

Almost below the radar, she has been writing great fantasy stories for the last thirty years. I predict her Kencyrath series will ultimately be recognized as one of the best in heroic fantasy. That most of Hodgell’s books are fairly short by today’s standards is a tremendous plus by my standards. I am looking forward to getting to the rest of the books before the new year is done.

Based on what I’ve read, I’m willing to make a pair of predictions for 2015. The first is that Milton Davis, sword & soul author, publisher, and impresario will continue to grow as an influential figure in heroic fantasy. Between his own writing, editing collections like Griots, and getting a new Charles Saunders book out in hardcover, it’s like there’s nothing he can’t do. 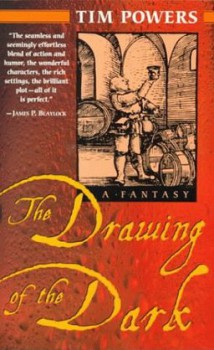 My second prediction is that Ted Rypel’s Gonji series, brought back into print by Wildside Press, will continue to garner attention and fans. Gonji is swords & sorcery written as epic fantasy. These books are dynamite and deserve to be placed on every heroic fantasy fan’s shelf alongside their Karl Edward Wagner and Charles Saunders books.

Reading Abengoni reminded me that I do actually like new books sometimes, so I’m planning to get to a few more this year. Good stories don’t have to forty years old and printed by DAW, so I’m going to keep a weather eye open for the best new fiction to check out here on Black Gate.

I want to keep up with my reviews of historical adventures and get to some of the true classics, such as Frans Bengtsson’s The Long Ships. I also hope to be more diligent in reading and reviewing the tons of great short stories presented by the likes of Heroic Fantasy Quarterly and Swords and Sorcery Magazine.

Future classics and beloved favorites are going to arise from the authors on the pages of these and similar magazines, and I want to witness their emergence.

Mostly more of the same with just a few tweaks. Why change what’s been the most fun I’ve had reading and writing in years?

Thanks for this post Fletcher. I missed your Bard post from May and this wee reminder was great. I found out about Keith Taylor via an article in an old copy of Aurealis Magazine. Thought interesting and then a while later came across Bard and VI. They on my shelf on my to read list. Note to self to ask some expat friends living in Australia to keep an eye out for V for me.

The reviews and comments gave me wonder if The Bards Tale series if computer games was inspired by Taylors works.

Thanks. Bard has been sitting in the attic for decades and I’m a little sad I didn’t read it until now. On the other hand, it means I have a whole new bunch of books to discover.

Very productive, Fletcher, keep up the good work! I’ve really enjoyed your reviews over here and on your own site as well in the past few years, they’re becoming a tremendous resource for S&S fans.

Really need to bump Drawing of the Dark up on my reading list. I had never even heard of PC Hodgell, definitely need to track some down.

Thanks, Bill. It’s definitely been a ball doing this. I really can’t recommend Hodgell enough. That even someone as steeped in the genre as you has missed her says a lot about the randomness of success.

Keep up the great work, Fletcher, I love your posts. Thanks for keeping on top of the S&S short form. My hat’s off to your stellar reading year – and I’ll hoist one in anticipation of your 2015 exploits!