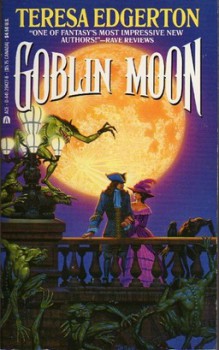 Matthew David Surridge reviewed Teresa Edgerton’s Goblin Moon (1991) here at Black Gate early last year, and here I am to write about it again. It’s a book that, though recently reprinted, I suspect most readers are unaware of, so I want to shine another spotlight on it. Also, since reading Tim Powers’s The Drawing of the Dark, my itch for swashbuckling adventure got itchier.

I read this when it first came out and my memory of it was very pleasant. I remembered loving the dry humor and also the tremendous detail. Now my friend Carl, on the other hand, said he hated any book that spent as much time as it did describing characters’ clothes. My response was, if I recall correctly, that he was missing the point or something like that.

On rereading Goblin Moon this past week, I was happy to find that, one, the book held up very well and two, yes, Carl missed the point or something. Actually, the point he missed was that Teresa Edgerton created a deliriously detailed world, down to the clothing, that is richer than just about any other in fantasy.

There are a host of things that make Goblin Moon a fun read. The elaborate world-building, the intricate plot, and the colorful characters, to name an important triumvirate, are exactly the sorts of things you want to find in a book with its roots in Stevenson, Thorndike, and Sabatini. Add a lively pace and clever writing and you’ve got the perfect way to while away several lazy hours amidst floating coffins, decadent diabolists, a vengeful fairy, and an interlude with pirates.

Goblin Moon opens with a pair of river scavengers, Jed Braun and his uncle Caleb, drawing a coffin out of the waters of the River Lunn. The casket bears the strangely undecayed body of a man and several tomes of dark magic. Their discovery leads Caleb back to an old companion, the bookseller and one-time alchemist Gottfried Jenk, and consequently leaves young Jed in need of a new way to support himself.

At a graveyard picnic we meet Jenk’s granddaughter, Sera Vorder. To help her achieve a better station in life, Jenk sent Sera to live with wealthy relatives. While Sera adores and watches over her pale, sickly cousin Elsie, Elsie’s mother, Clothilde, has little patience or respect for her husband’s poor relation. Sera is convinced all Clothilde’s efforts to improve Elsie’s health are no more than quackery and that she must find a way to help her poor, diminished cousin.

These two stories are brought together by the separate machinations of two extravagant characters. The first is the dainty and socially powerful Duchess of Zar-Wildungen. She is rumored to be more than a little bit fairy, and is known as a woman who always gets exactly what she wants.

The second is the fragile-seeming poet, Lord Francis Love Skelbrooke. His heritage runs directly back to Baroness Orczy’s Scarlet Pimpernel, as he presents a delicate foppish appearance to the public and a more dashing one that he hides behind masks and disguises.

When we first meet him, Lord Skelbrooke is a picture of dandyish glory:

I wonder if I might be of assistance?” said a quiet voice behind her, and Sera turned. The voice belonged to a slender gallant in lilac taffeta with foaming white lace at his throat and wrists and knots of silver ribbon on either shoulder.

A few chapters later, he is a very different man indeed:

He raised the dagger and began to chant the sacrificial hymn. The others moved closer in anticipation.

But: “I think not,” said a light, affected voice in the Master’s ear, and suddenly the barrel of a tiny pistol was pressed against his left temple. The soft voice took on a steely edge. “If you cut the girl, make a move, or speak a single word, I will blast your brains out.”

Sera, hoping only to help her sickly cousin, is quickly enmeshed in the Duchess’s mysterious plans and Skelbrooke’s investigations into dark goings-on behind the normal day-to-day events in Thornburg. Smart and level-headed, Sera finds herself contending with all sorts of things she never expected to: unsavory noblemen, secret passages, sorcery, and monstrous suitors.

I can’t say more without giving away the many mysteries upon which Goblin Moon‘s plot is built. I will say, however, that the way Edgerton resolves them is very well done. Few questions are answered directly, but the solutions are there for the reader to piece together on his own. When the story reaches its end, you can look back and see each brick put carefully into place.

I’ve mentioned the world-building of Goblin Moon and it really is impressive. On the surface, it’s a fairy tale version of eighteenth-century Europe turned on its side. The primary setting — the city of Thornburg in the land of Marstadtt on the continent of Euterpe — is similar to a small German state in the Age of Reason, except dwarves and gnomes live comfortably alongside humans, and magic and alchemy are real. In tunnels and caverns live animal-like goblins. While there is a familiarity to Edgerton’s world, there is a mystery and strangeness woven into it as well.

It’s a world described in vivid color and loving detail. Goblin Moon is rich, almost oversaturated, with particularity. To build up the richness of the world, even things of little importance to the plot get paragraphs devoted to them at times.

A set of books on Gottfried Jenk’s shelves:

Jenk had acquired a notable collection of rare and valuable volumes: The Mirror of Philosophy with its bizarre tinted woodcuts; Tassio’s Reflections; one of five known copies of The Correction of the Ignorant; and (the pride of the collection) Antony’s Fools Paradise bound in crumbling indigo leather with leaves edged in dull gold and but three minor errors in transcription. 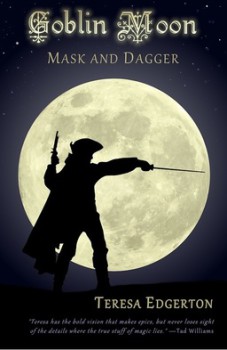 Great effort is taken to depict the decadence of many of the city’s upper class. One woman in danger of being sent to debtors’ prison is able to marry a condemned man — for a price — and pass on her debts to him. They often seek any new distraction or sensation. There is a trend among many wealthy wives to hold pre-funerals for their husbands to ensure they don’t miss out on the mourning should they die before them, so they host extravagant parties in graveyards. Some jaded noblemen have turned to dark sorcery, founding the Knights of Mezztopholeez.

And then there are the clothes. There are waistcoats with flowers, or of robin’s-egg blue, or cherry-colored. Dresses come in pastels or claret-colored silk, and are bedecked with all manner and color of lace and ribbons. Men dress in scarlet coats of military cut, tattered frock coats, and jackets of green velvet.

Edgerton, for all the tremendous detail lavished on her world and its inhabitants, is never overwhelming, The original paperback was just under three hundred pages long. The plot never stops moving for a five page dissertation on meals or religion. Instead, people, customs, and pasttimes are presented in and around the characters and actions, never becoming a slog.

Goblin Moon is a model of what light entertainment can be. It’s not going to change your world, but it will definitely bring a smile to the face of anyone with a taste for some swashbuckling and Gothic mystery. This tale, smelling just a little of lavender and gunpowder, is a fun respite from all the bloody, cynical “realism” permeating much of modern fantasy — come to think of it, much of modern life.

There is an equally fun sequel, The Gnome’s Engine. It is currently out of print, but easily found on Amazon for a penny plus shipping.

That first cover is outstanding!

Isn’t it? So many contemporary covers pale beside it.