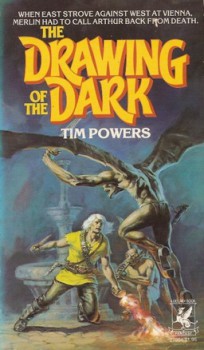 I have loved the work of two-time World Fantasy Award-winning and two-time Philip K. Dick Award-winning author Tim Powers ever since I read The Anubis Gates (one of the foundational works of steampunk) back in 1984. Since then, I’ve been equally thrilled by a number of his other books, including The Stress of Her Regard, his tale of artists and vampiric monsters; Last Call, about the search for the Fisher King in Las Vegas; and Three Days to Never, involving time-travel, Albert Einstein, and Charlie Chaplin.

Every few years I feel the pull to revisit his third novel, The Drawing of the Dark (1979). It’s a swords & sorcery adventure set in 1529 and climaxing during Suleiman the Magnificent’s siege of Vienna.

Briefly, The Drawing of the Dark is about the adventures of Brian Duffy, an aging soldier of fortune who encounters a stranger with an offer of employment at just the time circumstances require him to flee Venice.

The old man who’d hailed Duffy stood by the window, smiling nervously. He was dressed in a heavy black gown with red and gold embroidery at the neck, and wore a slim stiletto at his belt, but no sword.

“Sit down, please,” he said, waving at the chair.

“Whatever you prefer.” He opened a box and took from it a narrow black cylinder. “My name is Aurelianus.” Duffy peered closely at the cylinder, and was surprised to see that it was a tiny snake, straightened and dried, with the little jaws open wide and the end of the tail clipped off. “And what is yours?”

Aurelianus nodded and put the tail end of the snake into his mouth, then leaned forward so that the head was in the long flame of one of the candles. It began popping and smoldering, and Aurelianus puffed smoke from the tail end.

The old man offers Duffy a thousand ducats and a monthly salary if he will travel to Vienna and serve as the bouncer at Aurelianus’s inn, the Zimmerman. It is famous for the Herzwesten bock beer brewed there every year for as long as anyone can remember, even when it was a monastery. With the possibility of the Ottomans attacking Vienna, the city is attracting soldiers, so a steady hand will be needed to keep order at the inn.

Feeling his age, as well as fatigue from all his years of fighting, Duffy agrees to the odd old man’s offer. He once lived in Vienna and the hope of reencountering his old flame Epiphany Vogel, who left him to marry another man, serves as added enticement to go north to Austria.

If Aurelianus’s smoking habits hadn’t been enough of a warning that his new job would involve the supernatural, his trip north makes it very clear. As he rides out of Trieste into the Julian Alps, he realizes that he is being followed by all sorts of supernatural creatures. Like the band of dwarfs who save him from bandits, the parade of monsters in the mountains turns out to be guarding him and ensuring his safe passage along secret trails over the snowy mountains.

Eventually, Duffy reaches Vienna and the Zimmerman Inn. There he is surrounded by a raft of colorful characters, one of Powers’ great talents. 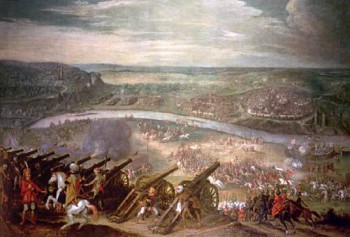 There is Bluto the hunchbacked Swiss mercenary hired by Aurelianus to oversee the city’s artillery. Gambrinus the brewmaster never leaves the massive brewery hidden from sight in the deep cellar of the Zimmerman. As the time approaches for the tapping of the new beer, strangers from around the world, including an American Indian and a Japanese sorcerer, appear at the inn waiting for something, though what Duffy is unable to determine.

Finally, a band of over-the-hill warriors arrives from the North in an ancient dragon boat. Inspired by a local magician’s vision that the tomb of the god Balder was endangered by Surter the Fire-Giant and his hordes, they traveled to Vienna hoping to lend their swords to its defense. Their reaction to Duffy reveals a little of the true reason he was hired by Aurelianus in the first place:

Bugge looked up when he heard splashing by the larboard gunwale, and at first he thought some Viennese had fallen into the canal and was trying to climb aboard. Then, the blood draining from his wide-eyed face, he saw two slimy green arms appear at the rail, followed a moment later by their owner, a tall grim-looking man covered with canal scum and clutching a broken sword. In a moment this ominous newcomer had clambered aboard and was standing in a puddle of water between the rowers’ benches.

Bugge dropped to his knees, and the rest of the Vikings on board followed his example. “Sigmund!” he gasped. “My men and I greet you and await your orders.”

Brian Duffy is the reincarnation of the greatest hero of the West. At one time he was Sigmund and at another, Arthur. It is this latter personality that Aurelianus hopes to bring to the surface when the time comes to fight the true enemy, which is not the Ottomans. Arthur is needed to protect the brewery and its special dark beer, drawn only once every seven centuries. This time, the draught is needed specifically to heal the true ruler of the West, the Fisher King.

The impending Ottoman attack is one physical manifestation of a greater, spiritual battle being waged between the West and the East. Just as the mystical Aurelianus marshalling his agents and fortunes for the West is more important than any Hapsburg ruler, the true power in the East isn’t the sultan, Suleiman, but his grand vizier, Ibrahim Pasha. In an effort to kill Duffy before he can influence the conflict too much, the vizier sends winged afrits to hunt him down on the night streets of Vienna.

Seen at this distance of only a dozen feet, the things did not really look very human. Their eyes were far too big, and their foreheads sloped back parallel with their long, many-fronded ears; their shoulders were broad but hundched, and a fixed, wolflike grin curled under their muzzles. 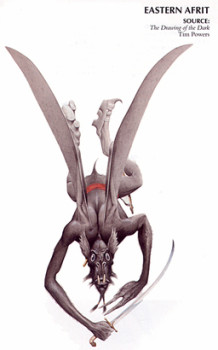 There’s plenty of action in The Drawing of the Dark, including duels with monsters in dark places and massive assaults on the walls of Vienna, all done very well by Powers. But it’s Brian Duffy and the struggle between what he wants for his life versus what Aurelianus wants from him that is the main focus of the story.

The first third of the book is often funny and filled with swashbuckling and derring-do, but gradually the novel takes a more serious turn.

In Vienna, Duffy finds Epiphany working at the Zimmerman. She is widowed and bowed by age and despair. As much as he loves her and tries to help her, he is unable to bring her out of it and it starts to weigh on him. When he learns that Aurelianus is hoping to supplant his own personality with that of Arthur, he retreats into drunkenness. The humor that laces the early chapters becomes rare and the darkness of the coming battle grows and hangs over everything.

By the final part of the book, the siege is underway. We are treated to unforeseen deaths, terror-shelling by the Turks, major betrayals, and the sudden appearance of an old foe from Duffy’s past. Where a certain autumnal feeling surrounded the first section of The Drawing of the Dark, its last feels positively wintry. Each time I reread the book, I get surprised again, halfway through, by that shift in tone. It’s done very skillfully. I think I deliberately forget it because I’m totally captivated by Duffy’s early liveliness and hate to remember the trials he’s subjected to as the book moves towards its conclusion. 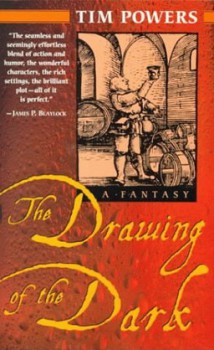 I was impressed with how much I still love this book. While it’s chock full of the sort of inventive oddness common to Powers’s works, it also has a believable and sympathetic hero. Sometimes his characters do get a little lost in the convoluted plots and twists, but Duffy remains strong and alive in the face of everything his creator puts him through.

James Cawthorn included The Drawing of the Dark in his Fantasy: The 100 Best Books. He considered it superior to The Anubis Gates, finding that book too complicated and too long (imagine calling a 387-page book too long these days). While I don’t agree with him vis–à–vis the two books, I would definitely see putting both on my list of best fantasy novels. If you’ve never sampled Tim Powers’s wares, this is a great introduction.

I think ‘The Drawing of the Dark’ was the last Powers book I read – and very enjoyable it was, too. ‘Anubis Gates’ was the first (I read them as they came out). I re-read ‘The Anubis Gates’ a couple of times afterwards. Each time I did so, I found out I’d forgotten all about a very dull secondary plot-line, involving some sort of floating clown. I recommend readers skim those parts – they’re not that important to the overall story.