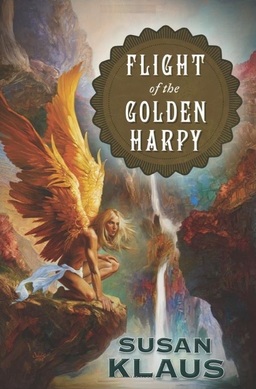 I picked up a copy of Susan Klaus’s debut novel over the weekend, and so far have been intrigued. It’s romantic fantasy dressed up as science fiction, in which a young woman returns to the jungle planet of Dora, where long ago she was saved by a male harpy with beautiful golden coloring. But the human colonists of Dora treat harpies like dangerous animals and hunt them like wild game.

This morning, I read a guest post by Klaus at SF Signal, where she reveals that Flight of the Golden Harpy was inspired by an encounter with Brad Pitt while she was an extra on Oceans Eleven:

The guy wasn’t a disappointment… Brad is even more gorgeous in person. After 12 hours of gawking and drooling, I learned he was also a nice, down-to-earth guy. But his looks and personality had nothing to do with my book dedication or why he’s my main man and character in my books. It came from how Brad was treated when he first walked on the set. The extras immediately mobbed him. He smiled, signed their autographs, and [posed] for their little cameras, desperately trying to appease the crushing crowd. It was sad. Even on a closed set, he was smothered and harassed. Going out in public must be a nightmare for him. Sure he’s handsome and has fame, and fortune, but is it worth a hectic stressful life with the press and fans constantly stalking and pursuing him like wild game…

I drove home and realized that good-looks can have drawbacks, especially in his case. That night I started writing my fantasy about a jungle planet with the point of view of the beautiful winged harpies, half-bird, half-human creatures that can’t understand mankind or why humans hunt and kill them for their wings that become mounted trophies on a wall. I gave Brad Pitt credit because he inspired the story, and the novel is also dedicated to our vanishing wildlife.