Thanks in large part to Nicholas Meyer’s The Seven Per Cent Solution (book and film), Sherlock Holmes had a revival of popularity in the mid seventies. This resulted in an under-appreciated British-Canadian big-screen effort, Murder By Decree.

The most famous detective had tackled the most famous serial killer, Jack the Ripper, in 1965’s A Study in Terror. Originally conceived as a sequel to Christopher Lee’s under-achieving Sherlock Holmes & The Deadly Necklace, John Neville played a solid Holmes, though saddled with Donald Houston’s doofus of a Watson.

Director and producer Bob Clark (whose next film, improbably, would be Porky’s) built his story around The Ripper File. There are several variations of the royal conspiracy theory and Murder by Decree changes some (but not all) of the names and follows one of them. 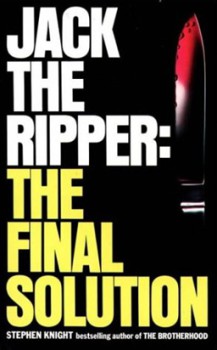 Knight’s book was an international sensation because it alleged a Masonic cover-up at the highest levels. Sir William Gull (the royal physician) was murdering prostitutes at the behest of fellow Freemason Prime Minister Salisbury (Police Commissioner Sir Charles Warren was another Mason in on the plan) because they knew of a secret marriage between Prince Edward Victor Albert and a commoner who was also a Catholic.

Sickert (real name, Joe Gorman) claimed to be the grandson of Albert Victor and that woman, Annie Crook. Their daughter, Alice Crook, was Sickert’s mother (Walter Sickert was his father: he was illegitimate). To ‘save the crown,’ Gull declared Annie Crook insane and she spent the rest of her life in and out of institutions. Gull, with help from a coachman named John Netley and Sir Robert Anderson (a senior police official at Scotland Yard), hunted down and murdered the prostitutes: those killings attributed to Jack the Ripper.

Knight (who died of a brain tumor shortly after writing an expose of freemasonry) contributed some useful information to Ripperology, but his royal conspiracy theory, which was disowned by Sickert himself, is generally dismissed by serious Ripperologists. It remains popular with the masses, however.

It has inspired variant scenarios in books such as The Ripper and the Royals (Melvin Fairclough), Murder and Madness (David Abrahamsen), and Prince Jack (Frank Spiering). The first two make for interesting reading, but are hard to believe in. The third is just thinly-disguised fiction.

Holmes investigates the murders on behalf of local shopkeepers, but is harassed by Sir Charles Warren. The shopkeepers are actually anarchists, as is the chief inspector on the case.

Holmes seeks out the real-life Robert Lees, played by Donald Sutherland. Lees was a spiritualist said to have tagged William Gull (Sir Thomas Spivey in the film) as the Ripper. The police dismiss Lees as a nut. Holmes realizes that all the murdered women knew a Mary Kelly, from whom he learns of Annie Crook.

Visiting her in an asylum, he realizes her incarceration drove her insane and discovers she was secretly married to an ‘Eddy’ and bore his child. She would not tell them where the child was hidden, but Mary knows and the Ripper has been killing her associates in a search for the child.

Holmes finally meets with the Home Secretary, the Prime Minister, and Sir Charles Warren and discovers that Eddy is really Prince Edward and Slade and Spivey were acting in the Crown’s interests to track down the secret, Catholic child.

Holmes is told that Annie Crook committed suicide and, outraged, he gives an impassioned speech, disparaging the conspirators.

Murder By Decree uses quite a bit of actual Ripper details, which contributes to a solid storyline. Ripper buffs will recognize many things in this film.

Christopher Plummer, who had worn the deerstalker for Canadian television in 1977’s Classics Dark and Dangerous: The Silver Blaze, gives a strong performance as Holmes. He certainly looks the part. He is actually too sympathetic and humanistic; there are no traces of Arthur Conan Doyle’s obnoxious, condescending egoist.

But this contrasts well with the dark subject matter and the squalor of life in the East End. For a stand-alone performance, Plummer’s portrayal compares favorably with most.

James Mason is a non-doofus Watson. He’s a bit silly, but he’s a competent helper and reliable; this is the Watson that Doyle wrote. It’s not perfect, but it works.

The pleasant Holmes aside, this is a well-acted, visually strong film with a good Ripper story underlying it. It was a smash in Canada, winning five Genie Awards.

I mentioned last week that Arthur Conan Doyle had Holmes chasing the Hound of the Baskervilles during the Ripper killings. Several authors have since written Holmes and Ripper stories. Edward Hannah’s The Whitechapel Horrors had a wealth of Ripper detail, but it also had an unsatisfying ending and wasn’t narrated by Dr. Watson.

Lindsay Faye published the successful Dust and Shadows a few years ago. And Michael Dibdin’s The Last Sherlock Holmes Story was quite a shocker.

If you like Sherlock Holmes or have any interest in the Ripper killings, Murder By Decree is absolutely worth watching. And it’s been available on DVD for under $5 for a few years now. 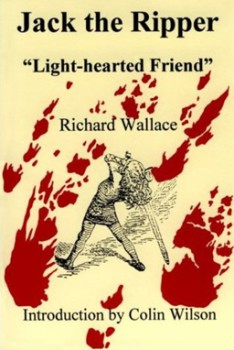 The character of William Slade shared the same initials as Walter Sickert. And Sickert, an artist, had attended the Slade School of Art. Melvyn Fairclough says that this was done to intimate that Sickert was a part of the Ripper gang, while avoiding a lawsuit from Sickert’s son, Joseph.

Joseph was so hurt and disappointed after seeing the film that he revealed to Fairclough that one of the Ripper gang was Winston Churchill’s father.

He formerly ran the HolmesOnScreen.com website and is a Ripper buff.

Another terrific post, Bob. I saw the film shortly after it first came out, and while Plummer is not my favourite portrayer of Holmes, remember it as being very strong. Around the same time, was there not a film wherein Holmes meets Freud?

@Violette – Yes: that was Nick Meyers’ THE SEVEN PERCENT SOLUTION. I don’t mind that one, though most Holmes fans seem to like it more than I do.

However, his THE CANARY TRAINER is a Phantom of the Opera tale and by far my favorite of his three Holmes books.

If you look Meyer up on imdb, he’s got quite the resume.

Jeremy Brett’s Granada series did a one hour episode of Silver Blaze and is certainly worth watching.

Arthur Wontner’s last Holmes film was a version of Silver Blaze. Sort of. The story was seriously monkeyed with, adding Professor Moriarty and Sir Henry Baskerville.

It fared poorly in England and wasn’t released in America. At least, not until Basil Rathbone’s smash hit, The Hound of the Baskervilles. Wontner’s film was dusted off, crassly retitled Murder at the Baskervilles and put in American theaters.

Wontner is still a classic Holmes, regardless.

[…] week over at Black Gate, I had a second straight Jack the Ripper-centric post. This time discussing a pretty good Sherlock Holmes film, Murder By […]

[…] Murder By Decree – Sherlock Holmes and Jack the Ripper movie […]

[…] I enjoy Plummer’s performance (his second as the Great Detective) and you can read my post about the film over at Black Gate. […]