A friend once told me of his desire to see a movie with even more action than Die Hard. He envisioned a film with action from first frame to last. I bring this up because the third book of P.C. Hodgell’s Kencyrath series, Seeker’s Mask (1995) is one of the most fast moving, packed-to-the-gills-with-thrills books I have ever read. It may not be the all-action nirvana my friend hoped for, but it’s about as close as I’ve ever found.

It starts in the rules-smothered confines of the Women’s Halls, and then whips Hodgell’s heroine Jame up and down the world before ending in the middle of a barbarian tribe’s fiery ceremony. Invisible assassins, gods, malign magics, and trips into people’s minds smash up against one another for the reader’s attention. If all I did was list the events in Seeker’s Mask, this article would be twice as long as I want it to be.

Jame is a Highborn of the Kencyrath, one of three species molded into one race by their god to fight against Perimal Darkling. The Highborn are the rulers and priests and the fewest in number. The most numerous species, the Kendar, are the soldiers and craftsmen. Finally there are the leonine Arrin-Ken, who served as the race’s judges until frustration led them to leave Kencyrath society in order to decide what needed to be done next in the war against Perimal.

Thousands of years ago, the High Lord Gerridon betrayed his people to Perimal Darkling in exchange for immortality. Two-thirds of the Kencyrath were killed and the survivors fled to the world of Rathilien.

In the previous book, Dark of the Moon (1985), Jame had reunited, after a decade of separation, with her twin brother, Torisen, Lord of the House of Knorth, and High Lord of all the Kencyrath. He and the Kencyrath armies had just emerged victorious from a great battle against the Waster Horde (read the review here). As the only other known member of the House of Knorth, Jame’s sudden appearance throws political calculations out of whack.

Highborn women are treated as little more than bartering tokens to form alliances between the noble houses. Their faces must be covered at all times, even among other women. To prepare them for their role in Kencyrath society they are sent as young girls for training in the Women’s Halls.

“The first duty of a Highborn lady is obedience.”

So spoke the young instructress as she swept imperiously back and forth before her even younger class.

The extreme tightness of her under-skirt obliged her to walk with tiny, rapid steps, but she did this so smoothly that she might have been mounted on wheels.

“A lady’s second duty is self-restraint,” she said, pivoting on her toes. Her full outer skirt belled out round her, velvet pleats opening to reveal panels of rich embroidery, restraint transformed by long practice into grace.

“Her third duty is endurance.” 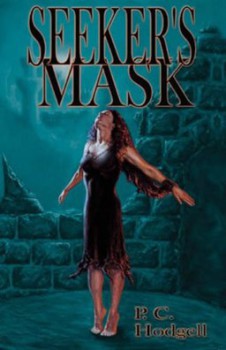 It’s in this confining situation Jame finds herself at the start of Seeker’s Mask. The title comes from the eyehole-less mask she was made to wear when she first arrived to force her to move more slowly and cautiously. The Matriarchs, the senior woman of each noble house, hoped to break and bend Jame to their traditions. This does not go well for anyone.

When Jame flees the Women’s Halls into the adjacent fortress of her brother, she discovers she is being stalked by invisible assassins. Thirty-four years earlier an attack by the same guild of killers murdered all except one of the women of the House of Knorth.

During her flight through the moon-lit corridors of the Women’s Halls, there’s a great glimpse of how Jame sees herself when she declines an offer of protection from the Matriarch of House Jaran.

“Somehow, Matriarch, I’ve got to draw them off. All of them, including the three or four more who must be in the Coman or Randir quarters, if they aren’t here. There isn’t time to backtrack, either. I’ve got to cut through your compound.”

“I… see. Child, are you quite sure you know what you’re doing?”

“Very seldom,” said Jame with a sigh. “Tonight, maybe. Lady, please. I — can’t explain it, but somehow this sort of thing is my job, my… responsibility.”

Jame survives the battle with the assassins only to discover that the half-blooded Kencyrath servant, Graykin, she bound to herself in Dark of the Moon has been taken prisoner by her brother’s greatest enemy. She immediately decides she must rescue him and things proceed to get crazier.

In the course of her efforts to save Graykin she acquires a bodyguard of young Kendar trainees, finds herself inside a fortress that begins magically traipsing about the countryside, and argues with Rathilien’s elemental gods.

The weirdness in the previous books, God Stalk (reviewed here) and Dark of the Moon, intensifies in Seeker’s Mask.  The god of air, Old Man Tishooo, manifests as an intelligent wind that playfully flips Jame’s skirt, and then smashes the windows. The god of water appears as a giant catfish given to saying “Bloop.” That traveling castle moves because it’s caught up in the mists of the weirdingstrom, which may or may not be the breath of a giant snake that lives under a river bed. It moves those caught in it to another patch of weirdingstrom somewhere else in the world.

Hodgell does not hold her readers’ hands or spoon feed them exposition. Every chapter, almost every page, introduces some new cultural element, some new relationship, or some new mystery. If you haven’t read the previous two, little of this book will make sense.

Just as when she is forced to wear the blinding Seeker’s Mask, Jame is unable to see what’s going on until she’s in the middle of it. Like Jame, the reader can rarely tell what’s coming around the next corner. We’re as anxious as she is to know what will happen next, and it lends a tremendous momentum to the story.

Jame is terrified that she is destined to become the Regonereth, the destroyer aspect of the Kencyrath god whose arrival may signal the culmination of the war against Perimal. Over the course of the novel it looks more and more as though her fears are justified.

This doesn’t mean only that she can destroy people and monsters when needed, but ideas as well. “Some things need to be broken” — spoken by Jame regarding the secrets and customs of the Women’s Halls — is a motif that runs through Seeker’s Mask. The Kencyrath have stagnated under centuries of customs and rituals. They have lost honor, faith, and purpose. Only the advent of the chaos that swirls endlessly around Jame is going to change things.

I’ve written before that Jame is one of my favorite literary characters. Seeker’s Mask only reinforces my love of Hodgell’s hero. I hope it isn’t considered sacrilege to admit that I like Seeker’s Mask more than God Stalk. As fun as the city of Tai-Tastigon is, the wilds of Rathilien and the customs-crippled culture of the Kencyrath are even more interesting and exciting.

Even with the quick jumps from one part of the world to another and from one crisis to another, this book is less episodic than God Stalk. While obscured at times, there’s a novel-length plot here that also moves along the bigger story of the Kencyrath and Jame. Hodgell’s written that God Stalk was really a tryout to see if should could complete a novel. With Seeker’s Mask she’s really hitting her stride.

I’ve only read Seeker’s Mask once before and I remember liking it, but not as much as I did this time around. That’s definitely because this time I read it in pretty close succession to rereading the other two books in the series.

But now I’m in new and uncharted territory. There are, to date, four more novels in the series that I haven’t read: To Ride a Rathorn, Bound In Blood, Honor’s Paradox, and The Sea of Time. I am really looking forward to them now.

Slightly off-topic, but your Die Hard-loving friend really, really, really needs to see The Raid: Redemption. And the Karl Urban version of Dredd, although I’d space them out — they’re weirdly (and coincidentally) similar in structure.

And you remind me yet again that I’m very, very, very overdue for a Hodgell reread. On my Kindle so I don’t have to deal with the Baen covers.

@ Joe H – I had forgotten about Dredd – yeah, it might come pretty close to that dream. I will have to check out The Raid. And, yeah, the Baen/Caldwell covers are atrocious. She got someone new on the latest book and it’s much better if too generic.
http://www.amazon.com/The-Sea-Time-Kencyrath-Hodgell/dp/1476736499