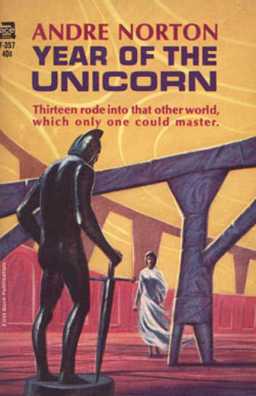 On the first day of the Year of the Unicorn, twelve and one young women are to be delivered to the Wastelands beyond High Hallack and into the hands of sorcerous shape-changers known as the Were Riders. In battle, they change their forms into those of fierce animals, instilling terror in their opponents, then ripping them apart with tooth and claw.

The lords of High Hallack turned to the Riders in their desperate search for any defense against the unstoppable invaders from Alizon across the sea. The Riders agreed, but demanded payment of those brides-to-be, due on the first day of the new year following the war’s end.

Andre Norton’s novel, Year of the Unicorn, introduces Gillan, an orphan relegated to a dreary future in the abbey of Norstead, who instead exchanges herself in secret for one of the appointed brides. In disguise, she rides into the Wastes in search of any life beyond the one she seems fated to. There she finds her beastly groom and discovers her magical powers.

Since discovering how good Andre Norton’s Witch World series is, I’ve been slowly making my way through its sixteen books. (There are later books by other writers, but it’s Norton’s original writing that has hooked me.) The four novels and dozen or so stories I’ve read so far have ranged in style from wild science-fantasy to swords & sorcery to Gothic mystery. Some have even read like fairy tales from a world catty-corner to our own. Year of the Unicorn, first novel in the High Hallack sequence, is one of those.

As a child, Gillan was rescued at sea from Alizon raiders by a High Hallack nobleman. She was too young to know where she was from or how she came to be captured, but her dark hair leads him to believe she’s from the East. Deciding that if she was worth the Alizoners’ trouble she might have some future value, the nobleman raises her in his own household.

When she begins to show retro-cognitive powers, she’s sent to the abbey at Norstead where she’s trained as an assistant healer and expected to live out her life in dull, repetitive days. When Gillan learns of the bargain made by the lords of High Hallack with the Were Riders, and that the brides are coming to Norstead, she begins thinking hard about some sort of escape from her tedious fate. 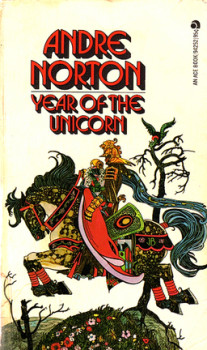 When the brides arrive, a young noblewoman living in Norstead is told she will join them as their thirteenth member. The woman is terrified and breaks down uncontrollably. Sent to sedate her, Gillan initiates her flight from Norstead. Her hope is to ride veiled and silent until it is too late for the bridal caravan to turn back without breaking the oath to deliver its payment by the first of the new year.

The plan succeeds and when the men-at-arms ride off, leaving the brides for the Were Riders, Gillan is left with them. At the rendezvous point, the women discover gorgeous furs and lavishly embroidered and bejeweled robes. The brides are irresistably drawn to the garments and eventually each chooses the one she finds most beautiful and, consequently, chooses the creator of the cloak as her husband.

Only Gillan is hesitant to make a choice. With her incipient powers, Gillan realizes everything is wreathed in illusion. The robes are, in reality, stitched with runes and lacking in ornamentation or fine tailoring, just as the extravagant meal left for them is actually plain. Still, she finds one particular cloak, in some ways the simplest and least of them:

There was one cloak lying well away from the rest, almost to the hedge which set the boundary of the dell. The runes did not run on it as an uninterrupted edging, but rather were broken apart. For a moment I strove to see it enchanted – green – or blue – or something of them both – and on it a winged form wrought in crystals. But that glimpse was gone so quickly that I could not have sworn to it a moment later. I was drawn to it – at least it drew my eyes more than did the others.

That choice puts Gillan into the heart of a conflict between the maker of the cloak, Herrel, and the other Were Riders, and will leave her wandering an unknown and unforgiving landscape. Herrel is only half Were Rider and is barely tolerated by his companions. Made jealous by Gillan’s choice, the other Riders work a dark magic on her and split her in two. The stronger, truer half they strand in the wilds, while they take the more malleable part of her with them into their homeland of Arvon, directing her attentions away from Herrel and toward another Rider.

While divided, Gillan constantly weakens. Unless her two halves can be reunited, she faces death. In the search for her severed self, she faces dangers mundane and supernatural: she is threatened with rape by Alizon soldiers; she has to circumvent the supernatural protections obstructing her entrance to Arvon; she must evade That Which Runs the Ridges, the dark power that haunts the empty spaces; she almost starves; and in her divided state Gillan is forced to traverse the land as a ghost, unable to interact with its inhabitants and at an elevated risk from supernatural terrors.

Year of the Unicorn is a fairy tale in heroic fantasy trappings. True fairy tales are not wish fulfillment stories with princesses (in the original Snow White, the queen is forced to dance to death in red hot iron shoes). They are often haunting journeys into the night lands, and Gillan’s story follows that path. Andre Norton wrote that the novel was a retelling of “Beauty and the Beast” and there are meaningful parallels between Belle and the Beast and Gillan and Herrel. She is betrothed to the Were Rider as part of a bargain. The wildness of her groom’s animal nature frightens her as much as he intrigues her.

I turned to look to the bed I had left. What lifted heavy head and looked at me green-eyed? Fur, sleek and shining fur, the fanged mask of awakening fury – a mountain cat, yet not a cat – but also death.

There are other obvious fairy tale elements. A brave orphan with hidden talents like Gillan could be a stand-in for dozens of folk story heroines. Herrel is cursed and left unable to control his bestial half. Only Gillan’s bravery and intelligence can save him. There are moments of dark terror when Gillan is trapped in shadowed landscapes and she struggles to distinguish what’s real from illusion. Much of the novel walks in the same dreamy places folk tales and legends live.

Something I haven’t discussed yet about Year of the Unicorn is Gillan herself. Most of the cultures of Witch World are very traditional and the place for most wealthy and middle class women is at the hearth or in the convent. Norton’s stories feature numerous heroines unwilling to be bound to those strictures and Gillan is one of the boldest of them. As intent as she is on freeing herself from her circumscribed life at the story’s outset, she is unsure of what she really wants or is capable of achieving. The heart of the book is Gillan’s effort to understand who she is and what she can accomplish in the face of hardship.

I admit, last week when I decided to pick up this book, I didn’t know what to expect. One of the most enjoyable aspects of Norton’s writing is the wide breadth of styles she employed to tell her numerous stories. I can’t think of any modern fantasy writer willing to change tone so drastically from one story to the next in a series. If for some reason you think you might be put off by a romantic fairy tale, I’d encourage you to take a chance with Year of the Unicorn. If you don’t, you’ll be missing out on an exciting and inventive introduction to one of the best fantasy series I’ve read in years.

Wonderful review of this book. I discovered it only last year and it has quickly become one of my favorite Witch World novels. Norton’s writing style is really magical here – capturing, as you say, the fairy tale feel.

“I can’t think of any modern fantasy writer willing to change tone so drastically from one story to the next in a series.”
Steven Brust, with his “Vlad Taltos” novels, frequently experiments with different styles. Of course since what attracted me to that series was the style of the first book I occasionally find those experiments frustrating.

@ I Kaye – thank you for the kind words. I’m not sure whether to pick up The Crystal Gryphon or Warlock of the Witch World next.

@ K Lizzi – I’ve only read the first Taltos book. Now I’m extra curious about the later ones. I’m very interested in artists willing to mix things up like that from time to time .

I forget how old I was when I first read this. Rather young. My first Witch World novel.

I think my first Witch World novel might have been Crystal Gryphon, although at that point I was familiar with Andre Norton but had no idea Witch World was even a thing.

@ Mary – I just read something claiming Norton only works if you discover her young. I was in my mid-forties so I’ve got to discount that.

@ Joe H. – Those Toads of Grimmerdale keep cropping up. It’s the story that hooked me and several other people I know.

[…] my previous reviews of Andre Norton’s  Year of the Unicorn and Three Against the Witch World, I wrote how exciting it was to discover that a series I had […]

[…] Witch World series three years ago. I’ve written several reviews for my site and Black Gate that you can read at the […]