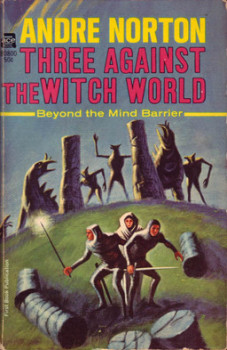 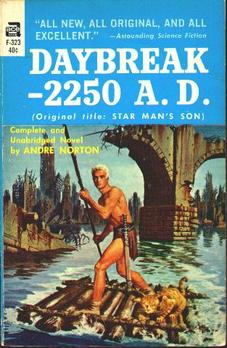 When I was growing up in the seventies, the most represented science-fiction author in the children’s section of my local library was Andre Norton. Her books took up more shelf space than either Robert Heinlein or Isaac Asimov. Maybe the children’s librarian was a fan.

And then there were the Andre Norton books on my father’s bookshelf. As cool as the cover of Daybreak – 2250A.D. looked, I never read it. For the next forty years, I managed to avoid anything by Norton.

Then two years ago, as I was getting my Swords & Sorcery blog up to speed, I pulled out my copies of Lin Carter’s Flashing Swords series. There in the second volume was “Toads of Grimmerdale” by Andre Norton.

Carter’s enthusiastic introduction was enough to make me give it a shot. Since I knew many of Norton’s novels were young adult, I wasn’t expecting a story about revenge. Woven from strands of darkness and shards of ice, it’s a haunting introduction to Witch World that I strongly recommend.

In Witch World (just reviewed here by Matthew David Surridge), Norton takes ex-U.S. soldier and blackmarketeer Simon Tregarth and tosses him through a dimensional gate. He must adjust to a world of super-science and magic, and quickly at that, for he must choose sides in a war. Simon is immediately caught up in the affairs of the witches of Estcarp and their ongoing struggle against the thuggish realm of Karsten. He joins a group of exiles and settlers from other dimensions and plunges into battle on and under the sea, in the air, and into far dimensions.

In Three Against the Witch World, and the closely linked The Warlock of the Witch World and The Sorceress of the Witch World, Simon’s triplets take to the stage. Each book is narrated by one of Simon’s children, each telling events from their perspective. Today, I suspect the three books would have been published as a single novel. In fact, all are available together in the omnibus, Lost Lands of Witch World. 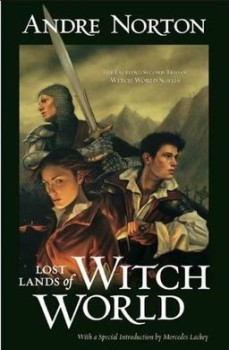 Children are not common among the long-lived Old Race of Estcarp. That Simon and his wife, Jaelithe, have three at once is astounding. There are two sons, Kyllan and Kemoc, and a daughter, Kaththea. In Estcarp, only women have supernatural powers and they lose them when they sleep with a man.

For reasons unknown, Jaelithe retains her powers and Simon himself develops some abilities while living in the Witch World. The triplets are born with unique powers of their own, as well as a deep psychic bond to each other. Kyllan, narrator of Three Against the Witch World, can direct the minds of animals.

The way of Estcarp’s witches is to take all girls with signs of power from their families and train them in their early teen years. Simon and Jaelith won’t allow Kaththea to be trained, but with both parents unavoidably away from home, there is no way to prevent the witches from abducting her.

For several years, Kyllan and Kemoc bide their time, plotting to rescue their sister before she is fully initiated into the ranks of the witches and lost to her family forever.

Eventually, the brothers rescue Kaththea. Together, they escape from Estcarp into the unknown lands beyond the mountains that make up the country’s eastern boundary. Turns out the east has been hidden for long ages by a magical barrier. For thousands of years, the people of the west were unable to even imagine anything to the east of their homelands. Only their half-Earthly nature, and some scholarly digging by Kemoc, allows the brothers to even think a refuge might exist over the mountains.

One of the book’s problems is the sudden reveal of Kemoc’s plan. There’s really no set-up regarding the mysterious east. Kemoc seems to pull it out of, well, nowhere, one day while talking to Kyllan. There’s really no foreshadowing or intimations; it’s just suddenly brought up. Now, I’m hoping that when Kemoc takes center stage in the next volume, that’ll be addressed, but right now it’s frustrating.

Another issue only became apparent when I reached the second half. Much of the time spent on Kyllan and Kemoc’s machinations could have been dedicated to the strangeness the sibling find over the mountains. For every alien race and culture that Norton created in the first Witch World books, it seems like there’s two in this book. 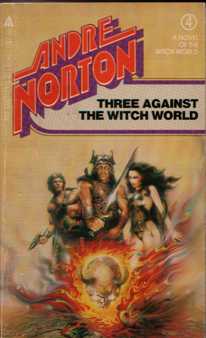 There’s so much fun stuff happening: soul-devouring mazes and cursed monoliths litter the landscape, tiny bird men flit in the sky and giant rats and werewolves threaten. I really didn’t need another dozen pages on the brothers’ dull if efficient subterfuges as they wait for the right moment to rescue Kaththea.

There are other problems with Three Against the Witch World that deserve mention. The hardest to overcome is Kyllan’s often stilted, mock-archaic narration. When Kyllan tells his sister something she finds astounding he says:

“My sister raised her head and stared at me as one who seeks for signs of jesting.”

Commenting on how his sister coordinated the siblings’ telepathic abilities:

“We almost failed. But as a wrestler could use an unorthodox move to unsteady his opponent, so had my sister chose the time and the maneuver.”

The image is good, but the sentence is clotted.

Another problem is Norton’s reliance on lots of exposition to fill in the momentous backstory. A person who saves Kyllan proceeds to spend several pages telling part of the land’s story. Kaththea creates a magical familiar that can show her and her brothers the distant past of the land. No matter how important the story being told is, it’s still clunky.

And still, and still. I really like Three Against the Witch World and will be reading the two companion books over the next few months. The pages overflow with striking images and adventure. The book sets the stage for a confrontation between Light and Dark, and while not the most original plot, Norton paints it with so much color and chrome that it almost feels new. 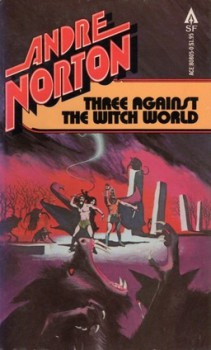 Also, despite his diction, I like Kyllan. On the surface, he’s a standard issue brave warrior, but underneath he’s a man aware of the weight of his actions. He and the other characters have enough depth and development to be believably human, not just collections of traits and tics.

As much as these stories are in the romantic adventure tradition, Norton never hides the costs of her characters’ actions. There is a weight attached to acts of violence and her best characters are aware of it. The short stories accomplish it better, but even in the early novels, there’s an effort to portray fantastic events in a world of recognizable human emotions and reactions. As great as the scale of Three Against Witch World is, it never overwhelms the humanity of Kyllan and his siblings.

The Witch World series has a sobriety I find reminiscent of Tolkien. It has an underlying feeling of loss. What it lacks is cynicism or the “nuanced” approach to morality of much contemporary fantasy. For Norton, heroism and nobility remain valid and honest reactions to evil. In a day when so many books seem to shun these attributes or replace evil with shades of gray, I’m finding Witch World a place worth visiting.

In all, Andre Norton wrote seventeen books set in Witch World. Another dozen or so authorized volumes were added by other writers (including the late A. C. Crispin).

I’m not quite sure where Norton fits into the pantheon of science fiction and fantasy writers, but the length of the series seems to indicate a certain scope of readership. Populated by as many strong women as men, I suspect she helped expand the female audience for heroic fiction. That the Witch World books have been reprinted fairly recently, and most are available as e-books (not the first two, though!), speaks well to their enduring popularity.

I never read the Witch World books myself, but I read the book you show a cover of (Daybreak –2250 AD) at least twice when I was a kid, possibly three or more times. I remember being swept away by the sense of adventure and wonder in that one.

@Howard: Now I’ve really got to read it.

Like you, Howard, I read Daybreak–2250 A.D. several times as a youth. If memory serves it was first published in the very early 1950s as Star Man’s Son, and it was with that original title that I found a paperback copy in my grade school library in ’57 or ’58–when I was 7 or 8) and devoured it. Those rat-like creatures haunting the ruined city nearly scared me to death…but they were _so_ cool an the danger so real to my imagination.

I read it a second time by mistake. I had gone with my mother to some (other) school one night for one of her Weight Watcher’s meetings held in some room or other near that school’s library. I wandered into that library and found what looked like a cool book titled Daybreak–2250 A.D. I don’t remember how it all worked because it was at night, but “they” let me check the book out. So I read the book again and loved it just as much, reliving the scary scenes all over again.

And then a year or so later back at my grade school library I checked it out again because I couldn’t find any other SF I hadn’t already read, but remembered I liked this one.

So the third time was indeed a charm. 🙂

As for “Toads of Grimmerdale,” I’ve posted here previously when Andre Norton came up that somehow it gave me a nightmare. I woke up gibbering some gutteral nonsense in such a tone that it scared my girlfriend into shaking me awake with proper force.

Great piece; this really does help interest me to look for the next Witch World books. Thanks!

@ Matthew: Thanks. I was really surprised how much I’ve enjoyed them.

@ DTruesdale: Now I’ve got to go an reread “Toads”. And when you see her picture, Norton looks just like a sweet littl old lady.

[…] discovering how good Andre Norton’s Witch World series is, I’ve been slowly making my way through its sixteen books. (There are later books by other writers but it’s Norton’s […]

[…] my previous reviews of Andre Norton’s  Year of the Unicorn and Three Against the Witch World, I wrote how exciting it was to discover that a series I had long overlooked was so much fun. I am […]

Black Gate » Blog Archive » The End of the Story: Sorceress of the Witch World by Andre Norton

[…] series three years ago. I’ve written several reviews for my site and Black Gate that you can read at the […]