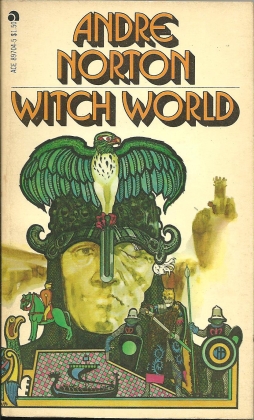 Somehow, when I was growing up, I missed Witch World. Some of the books in the series were always around, as I remember it, in my local libraries and bookstores, but I don’t think I ever read one — if only because I always try to read a series in order, and finding Witch World itself was not always easy. Somewhere along the line, though, I picked up a used copy, and set it aside to be read later. As it happens, there’s been a certain amount of talk about Andre Norton lately, here and elsewhere, and that prompted me to finally turn to the original Witch World novel, and see what I could make of it.

The book was first published in 1963 and ultimately gave rise to well over two dozen sequels, some of them collaborations and some written by other hands. That’s an incredible commercial success, particularly given that this was before the real establishment of fantasy as a well-defined commercial genre. Reading the book now, you can see in it much of what came later; but then also elements of what came before. So to me it feels like a kind of transitional or perhaps transformational work, a significant influence on the development of the genre as a genre.

The story begins with ex-colonel Simon Tregarth on the run from a criminal organisation. He escapes them through the Siege Perilous, a gateway which, Tregarth is promised, will lead him to a new world that will perfectly suit his abilities and desires. He ends up in the Witch World. Largely medieval in its social structure and technology — though there are elements of super-science present as well — it’s also home to magic, psychic powers controlled by the witches of the land of Estcarp, who’re seeking to maintain their realm against their aggressive neighbours. Most aggressive are the mysterious folk of Kolder, who have conquered the nearby island of Gorm with unknowable powers of their own. Tregarth signs on with Estcarp and the book follows him as he and the witches go to war with Kolder, throw their enemies back, and learn something about who it is they fight. 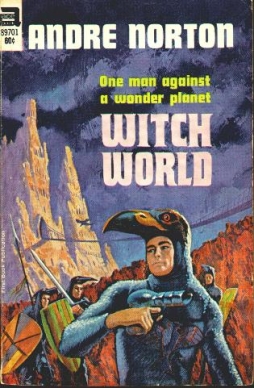 (As an aside, I remember puzzling over some issues of The Uncanny X-Men back in the late 80s, when the misunderstood mutants were given access to a magic portal called the Siege Perilous, which led anyone who passed through it to an appropriate destiny. I was puzzled then, since I knew that in Arthurian myth the Siege was a seat in which only the greatest of knights might sit. Now I presume the use of the Siege was a sign of the influence of the Witch World books. I don’t positively know that X-Men writer Chris Claremont took his Siege from Norton’s, but the two are nearly identical, and given Claremont’s magpie-like tendency to work bits of pop culture and fantasy fiction into his stories, I wouldn’t be at all surprised.)

Here’s the opening of the book:

The rain was a slantwise curtain across the dingy street, washing soot from city walls, the taste of it metallic on the lips of the tall, thin man who walked with a loping stride close to the buildings, watching the mouths of doorways, the gaps of alleys with a narrow-eyed intentness.

Simon Tregarth had left the railroad station two — or was it three hours ago? He had no reason to mark the passing of time any longer. It had ceased to have any meaning, and he had no destination. As the hunted, the runner, the hider — no, he was not in hiding. He walked in the open, alert, ready, his shoulders as straight, his head as erect as ever.

In those first frantic days when he had retained a wisp of hope, when he had used every scrap of animal cunning, every trick and dodge he had learned, when he had twisted and back-trailed, and befogged his tracks, then he had been governed by hours and minutes, he had run. Now he walked, and he would continue to walk until the death lurking in one of those doorways, in ambush in some alley would confront him. And even then he would go down using his fangs. His right hand, thrust deep into the soggy pocket of his top coat, caressed those fangs — smooth, sleek, deadly, a weapon which fitted as neatly into his palm as if it were a part of his finely trained body.

That’s writing out of the Howard-esque pulp tradition. The man of action. The potent weapon. The well-chosen adjectives; the superlatives describing the hero’s powers, and also his desperation, the depiction of a man on the edge. The sense of imminent violence. Also the grittiness; that first paragraph is almost noirish. The style’s clipped, direct, unironic, yet also slightly distanced from the hero, seeing him from the outside. 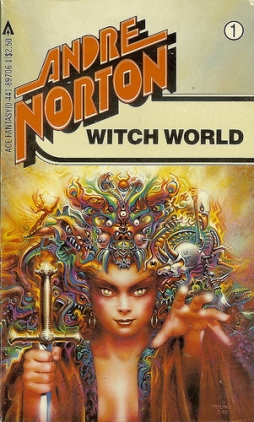 That changes. Not all at once, but slowly over the course of the book. Once Tregarth gets to the Witch World and has his first few adventures, we briefly switch perspective to another character, a woman who escapes from a forced marriage by the traditional trick of dressing in a man’s clothes. Then back to Tregarth and we watch as the two strands of the story come together. But as it does, you notice that it’s not really playing out like a pulp-hero story. Tregarth’s not confronting people, violently or otherwise. He’s not bending the world to his will. He just chooses to fight on the side of the witches of Estcarp and becomes one more member of their Guards.

In fact, what makes him significant are not classic pulp gifts like iron will or physical power, but the discovery of his ability to do magic. On Witch World, only (some) women can work magic — so long as they remain virgins. Simon discovers he can call on magic of his own, though, and uses it in the battle against Kolder. It all feels different than the pulp adventures I’ve read; it’s much more like a later generation of fantasy, like something out of David Eddings or Raymond Feist, in which fairly undefined magic powers slowly come to settle on the protagonists and form the key to their adventures.

What unites both the earlier and later type of fantasy is, perhaps, the focus on story above all. Theme here feels vestigial, even underexplored. The highly gendered nature of magic, Tregarth’s presence as an exceptional male magic-user, the switch in viewpoint characters, the hoary device of the woman pretending to be a man — it certainly seems like there ought to be some kind of thematic concern with gender, but to me these pieces felt so far in the background that they didn’t really connect up. The gendered elements were mainly plot drivers. For example, the nature of the witches’ magic gave the standard Fate Worse Than Death extra meaning, and threw a twist into the working-out of the book’s main romance. But for me, at least, the implications remain just that: implications, flavouring the world slightly without really suggesting conscious thematic concerns. 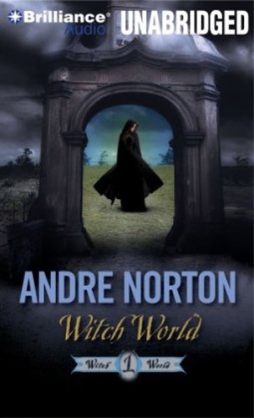 That may well change in later books. Certainly this first volume does seem to welcome a possible sequel. Not every loose end is tied up. Not every element introduced is paid off: Tregarth’s compantion Koris gains an axe from a godlike figure of the distant past, but doesn’t really do anything with it. There’s a kind of sprawl here, at the same time that there’s a well-machined plot. The world’s bigger than the story, but then the story also seems to be about learning the world and learning what wars there are to be fought in this world.

But then I’d also say that in the end the wars are what fade away, the same way that the pulp aspect of Tregarth’s character seems to fade. Violence, at least physical violence, becomes less important. It’s replaced with travel, exploration, disguises, chases, and the occasional individual battle of magic. Tregarth, as a modern man, has no background in swordfighting and so is at a disadvantage in this world as a hand-to-hand combatant; yet he never does learn to use a sword, never becomes the fighter you’d expect. Again, it’s his magical ability that becomes the focus of the story.

The Wikipedia entry on the Witch World books suggests they were a strong influence on the development of fantasy romance. There’s not an awful lot of that in this book. The adventure still dominates. But the nature of that adventure seems to look ahead to what the fantasy genre became in the 80s. You can see some of the elements common to early fantasy: a frame linking the fantasy-world to this world, for example, and hints of a technologically-oriented past behind the medievalesque present (compare the Shannara books and Fred Saberhagen’s Books of Swords). But there’s also an emphasis on the discovery of the protagonist’s powers and especially an almost game-like feel to the story: the hero never encounters anything too far beyond his capabilities, and all the dangers are things which he can rise to face.

That’s implied by the nature of the Siege Perilous’ power. Tregarth’s taken to a world that can challenge him, but which will not overwhelm him. Remarkably, this doesn’t hinder the adventure feel of the story. Suspense never lags. That’s largely because Norton’s writing is always tight, always fast-paced. You always believe Tregarth’s genuinely in danger. Simply, then: this is adventure that works as adventure. Speculation about the book’s place in the development of fantasy aside, this is a consistently well-told tale. If it has been narratively influential, that influence is well-earned by dint of sheer craft.

I only started reading the Witch World series in the last few years and I’m still working my way through the novels (I’ve got a review of third one, Three Against Witch World, coming up).
I’ve also read both story collections; Magic of the Witch World and Lore of the Witch World. Written a decade or more after the first book, they’re much better and less breathlessly paced than the novel Witch World. Many of the stories are concerned with the various places of women in a pre-industrial setting.
As for Witch World, I agree, it’s an exciting little book. It’s also leavened with darkness that’s developed more later in the series. And you definitely need to read the immediate sequel, Web of the Witch World.

Gotta love that first Ace cover (with the bird helmet and the hair dryer gun).

I’ve read the first several Witch World books; I need to go back and revisit them at some point.

I also think it’s interesting that you had Witch World and Darkover and (to a lesser extent) Pern all coming out at around the same time and sharing certain similarities of tone (SF disguised as sword & planet disguised as fantasy).

[…] read Three first. Of course, Three won’t be as good if you haven’t read Witch World (reviewed by Matthew David Surridge) and Web of the Witch World, so you should really start there. What […]