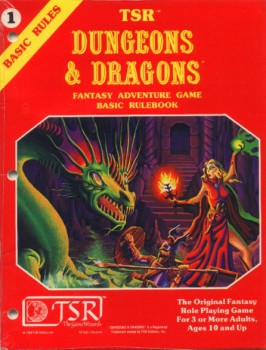 Fantasy literature and Dungeons & Dragons have a long history together. In his foreword to the original edition of the game (dated November 1, 1973), Gary Gygax specifically references several authors’ works, such as “Burroughs’ Martian adventures where John Carter is groping through black pits,” “Howard’s Conan saga,” “the de Camp & Pratt fantasies,” and “Fritz Leiber’s Fafhrd and the Gray Mouser pitting their swords against evil sorceries.” There are also – or, rather, were – references to Tolkien as well, but these were excised after the Professor’s estate objected (the excisions were not very thorough; even in later printings, one can still find occasional references to ents and balrogs, among other things). My own beloved “Blue Book” edition of D&D (edited by J. Eric Holmes) includes references not only to Tolkien, Howard, and Leiber, but also to Gardner F. Fox, creator of Alan Morgan, Kothar, and Kyrik, as well as to H.P. Lovecraft’s Great Old One, Cthulhu.

By now, Appendix N of the Dungeon Masters Guide is well known, both on this site and elsewhere. What many people do not know is that Gygax produced a “rough draft” of that appendix in issue number 4 of Dragon magazine (December 1976). Entitled “Fantasy/Swords & Sorcery: Recommended Reading,” its content is roughly the same as that in Appendix N. It’s primarily noteworthy for including Algernon Blackwood, though Gygax makes no reference to any titles he recommends from this great British writer of ghost tales. Another interesting aspect, at least from my perspective, is that, unlike Appendix N, which is quite clearly presented as a list of the books Gygax himself found “of particular inspiration” (to borrow his own phrase once more), this early version is presented as one of “recommended reading,” as if he were an instructor drawing up a list for an Introduction to Fantasy Literature course.

Fascinatingly enough, the 1981 edition of Dungeons & Dragons, edited by Tom Moldvay, includes an extensive “Inspirational Source Material” section that was drawn up, not by a university professor, but by a children’s librarian at the Lake Geneva Public Library. This librarian, Barbara Davis, is given a “special thanks” citation in the rulebook’s credits for “compiling part of our bibliography.”

Though it’s quite possible, even likely, that many of the titles included in the 1981 list were inspirational to Moldvay or to other members of the editorial team at TSR Hobbies, its presentation is much different than that of Appendix N. Whereas Gygax simply lists his favorite authors in alphabetical order, the later list is divided into several categories in an almost scholarly fashion. The three largest sections are “Fiction: Young Adult Fantasy,” “Non-Fiction: Young Adult,” and “Fiction: Adult Fantasy.” There are also sections for “Short Story Collections” and “Non-Fiction,” as well as a list of “some additional authors of fantasy fiction.”

The 1981 list is excellent and quite catholic, running the gamut from Lloyd Alexander and C.S. Lewis to Avram Davidson and Karl Edward Wagner and everything in between. Similarly, there are many entries for “books on folklore, mythology, fairy tales, bestiaries, and knightly legends,” which warms my heart, since these are the tomes that populate my own personal Appendix N. I suspect Bulfinch’s Mythology played a bigger role in my earliest conceptions of Dungeons & Dragons than did any other book and, even now, it and books like it loom large in my imagination.

That said, I can’t help but feel that there’s something mildly prescriptive about the 1981 list, at least compared to Appendix N, which is self-avowedly descriptive. The newer list begins by suggesting that “a little research is useful to improve a dungeon, flesh out a scenario, and provide inspiration for a campaign.” Later, it’s stated that “fictional tales and fantasy novels usually provide the best sources of inspiration.” Perhaps I read too much into those statements, but I detect a subtle implication: “read these books if you want to become a great Dungeon Master.” Now, I’d agree that reading widely in fantasy literature is a good way to improve one’s skills as a referee (and player, too!). What I suppose I find mildly disappointing is that the 1981 list seems so generic – a one-stop shop for all your fantasy reading needs rather than something more quirky and idiosyncratic that reflects the tastes of the game designers themselves.

Of course, by 1981, Dungeons & Dragons itself was becoming a lot less quirky and idiosyncratic. No longer was the game the private preserve of wargamers, college students, and adherents of the counter culture. Fantasy was becoming mainstream and bringing with it a much younger audience. Only the most curmudgeonly among us would deem this an unfortunate turn of events. Although I started gaming in late 1979, I, too, was a beneficiary of the mainstreaming of fantasy in popular culture and, with it, of roleplaying games like D&D. Still, I can’t help but feel a small bit of regret in seeing the change in presentation between two bibliographies published only a couple of years apart.

My personal Appendix N would include Robert Louis Stevenson, Walter Scott, Howard Pyle, and C.S. Forester. Adventure and historical novels influenced my gaming at least as much as the pulp writers in Mr. Gygax’s list, though I had read quite a bit from Appendix N before my first encounter with D&D.

[…] great deal, most notably in (you knew this was coming!) Gary Gygax’s 1979 Appendix N and the “Inspirational Source Material” found in the 1981 Tom Moldvay-edited edition of Dungeons & Dragons. Back in those days, game […]

[…] him in Appendix N of his 1979 Dungeon Masters Guide. However, Smith’s name does appear in the bibliography to Tom Moldvay’s edition of the D&D Basic Rules (1981). Moldvay’s contemporaneous adventure module Castle Amber is as true an homage to CAS as […]