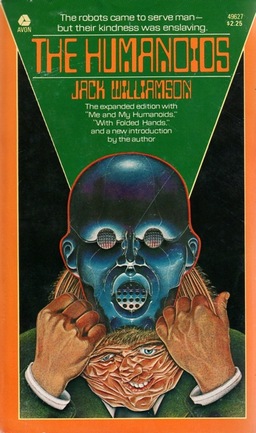 Mordicai Knode and Tim Callahan are making me look bad.

I know, what else is new. But seriously, these two have taken on the project of a lifetime — reading every author in Gary Gygax’s famous Appendix N (all 29) and reporting back in great detail every week at Tor.com.

I took on the project of a lazy Saturday afternoon: read their posts whenever I got around to it and report back here every two weeks or so. Sounded easy at the time. But Knode and Callahan still somehow managed to get way ahead of me. They’re relentless — since I last checked, they’ve covered Jack Williamson, Lin Carter, and John Bellairs, and meanwhile I’m still trying to figure out where the hell I left my copy of The Face in the Frost.

Okay, time to play a little catch-up. Let’s start with post 14 in the ongoing series, in which they tackle Jack Williamson’s classic SF novel, The Humanoids:

Mordicai: I’m just unclear on how it relates to Dungeons and Dragons. I mean, you could have a whole campaign about golems or Inevitables or Modrons and co-opt the plot from this book, but I think that is a stretch. Maybe the lesson you could learn from this book is that making hugely flawed characters is more interesting than making banal superhuman heroes who laugh in the face of danger and never give into the temptation to pry the ruby eyes out of the idol of Fraz-Urb’luu?

Tim: Yeah, I don’t see the Dungeons and Dragons link at all, and I am pretty darn sure Gary Gygax didn’t have any Modrons in mind when he generated his list of fave books. The Modrons are wonderful and all — who doesn’t like Rubik the Amazing Cube mashed up with Mr. Spock — but they aren’t central to early D&D. Or any D&D. Ever.

But, to be fair, Appendix N doesn’t specifically name The Humanoids as an influence, but mentions Jack Williamson in general. Probably his pulpier early stuff was what Gygax had had in mind. In retrospect, we should have read the Legion of Musketeers in Space with Falstaff and Friends book. But something called The Humanoids sounds like D&D from a distance. If you squint. And don’t read the back of the book.

Yeah, The Humanoids has nothing to do with D&D. Could have told you that. Guys, guys. You should have read our Jack Williamson feature last month. This is why we do this stuff.

Well, at least they’re honest about it. Next time, try Williamson’s Weird Tales stuff, like Golden Blood or Darker Than You Think. 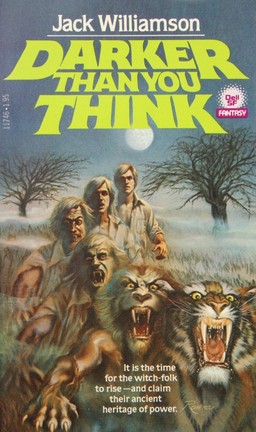 Or yeah, The Legion of Space. It’s packaged as science fiction, but it’s really science fantasy. And reading it will make you a better person.

Come to think of it, there’s a lot of classic pulp fantasy with Jack Williamson’s name on it, from his 1930 novel, The Green Girl, to Demon Moon (1994). What is that, seven decades as a full-time SF and fantasy writer?

Just as an exercise, let’s run through a handful of the inventive fantasy novels written by Jack Williamson since about 1930 that could have influenced D&D.

A better candidate, though, is probably The Reign of Wizardry, his 1940 novel of an Ancient Crete ruled by black magic and the iron fist of King Minos. A retelling of the legend of Theseus (here called Captain Firebrand), this one reads like a Ray Harryhausen movie, with a giant of living brass, a sinister wall of wizardry, and an unstoppable monster in the dungeons below the city.

There’s also “Gateway to Paradise,” cover story for the July 1941 issue of Startling Stories, featuring a stalwart hero taking on a sea monster with an axe — while in a row boat (now that’s a D&D hero). See the original cover here.

Probably the first Jack Williamson novel I ever came across was his 1948 werewolf tale Darker Than You Think — although I bought the 1979 Dell paperback, with the terrific Rowena cover (at left; click for bigger version). I don’t know if it influenced D&D, but I sure know it jumped off the shelves at W.H. Smith’s and said “Buy Me!”

There’s a few other candidates as well, including Dragon’s Island (1951), The Moon Children (1972), and maybe The Power of Blackness (1976), published three years before Appendix N appeared in the Dungeon Masters Guide. Just sayin’.

Well, that was fun. But let’s move on to Lin Carter before I start cataloging Williamson’s short fiction too, or we’ll be here all day.

I have to admit I’m not in the front ranks of Lin Carter fandom. I am in awe of the man’s accomplishments as an editor — including the magnificent Ballantine Adult Fantasy line, the seminal Flashing Swords anthologies, and countless others — but truthfully, his fiction has yet to lure me in. 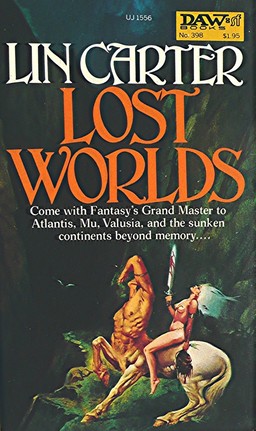 But Mordicai and Tim approach Carter with an open mind in post 15 and find much to admire in his novel The Warrior of World’s End:

Mordicai: I’m so glad this book came around when it did; I was starting to sour on the Appendices but then, BAM! Like lightning, Warrior of World’s End started laying down the sick beats. It reads sort of… well, to use the lingo of the Appendices, it reads like one of Jack Vance’s wizards is in a tutelary role like Fafhrd and the Gray Mouser’s patrons, Ningauble of the Seven Eyes and Sheelba of the Eyeless Face to a John Carter-esque protagonist. There are a lot of influences going into this, is what I’m saying, making a rich stew. Hearty fare for a weary traveller!…

It sort of reminds me of Jack Kirby, where each crazy thing thrown into the mix stays in the mix; it isn’t scrubbed out or forgotten but rather lingers, remaining a vibrant part of the story. A lot of fiction throws in big ideas and then walks away from them without exploring their ramifications, but if Warrior of World’s End says there is a giant metal flying robot-bird then doggone it, that robot-bird is going to stick around and become a major character!

Tim: In the larger context of this Gary Gygax Appendix N stuff, this Lin Carter novel reminds us of the unrestrained promise of early D&D. As the game evolved and kind of solidified into what most people play as a relatively traditional fantasy setting, D&D lost some of the anything-goes bravado of its early incarnations. Gygax’s Advanced Dungeons & Dragons books had pages devoted to converting characters from D&D to the western rules of Boot Hill or the post-apocalypse of Gamma World. Reports of the adventures he used to run — as evidenced by modules like Dungeonland — show that Gygax’s game wasn’t a straightforward dudes-in-armor-exploring-ruins kind of thing. He had his characters teleported to insane worlds where parodies of Alice in Wonderland characters appeared. He wasn’t afraid to amplify the mythology-building in his games.

The Warrior of World’s End reminds me of that. Anything can happen, but in the end it makes sense in its own way.

You can read the whole piece here.

We last covered Mordicai and Tim’s journey into Appendix N on September 9th, when they discussed Andre Norton and Michael Moorcock. The complete list of authors they’ve covered includes:

Next up: John Bellairs! Assuming I can find my copy of The Face in the Frost and read along.

“Scientifiction?” Now there’s a label that really should have stuck. So, if you were going to recommend one Jack Williamson, what would it be?

That Humanoids cover is the greatest ever 🙂

> if you were going to recommend one Jack Williamson, what would it be?

I know this sounds like a boring choice, but I think I’d take THE BEST OF JACK WILLIAMSON. It does a solid job of covering his career (at least the first 40 years — he continued writing for another 30 years after it was published), from his early pulp space opera into “With Folded Hands” and “Guinevere for Everybody.”

> That Humanoids cover is the greatest ever 🙂

Isn’t it? That’s the 1980 Avon edition. Creepy and compelling at the same time. I remember being totally captivated when I first laid eyes on it.

Actually John, Jack’s last published work was The Stonehenge Gate in 2005, which means 8 decades of SF/F publishing! Truly amazing. BTW I absolutely love the site (first time poster)- especially your Vintage Treasures pieces (maybe ’cause I’m an semi-oldster like you – 45). Keep up the great work.

Eight decades – that’s amazing. I knew that at some point (probably when I was doing the Williamson piece last month), but apparently my brain couldn’t handle the truth. Next week I’ll probably be saying six decades. Eight is just too fantastic to encompass.

And thanks for the kind words about the site! Last month over 20,000 people clicked on the NEW TREASURES link, and barely 200 clicked on VINTAGE TREASURES… but I keep doing the vintage pieces, because they’re a labor of love.

Actually, looking back at your piece on Williamson, that is where I got the info from! And, I remember that shortly thereafter ran across a secondhand copy of his last novel which I eagerly snatched up.

I’ve got both of those Williamson paperbacks you showed, John, and I had pretty much the same reaction to them you did. His science fiction work has eclipsed much of his early fantasy, but Williamson did some great work in that genre as well.

I just read Reign of Wizardry a couple of weeks ago. Pretty good! There’s a great sense of doom as Theseus is a great, badass hero but seems to be balancing on a razor’s edge every moment of the story.

[…] We last covered Mordicai and Tim’s journey into Appendix N on September 24th, when they discussed Jack Williamson and Lin Carter. […]