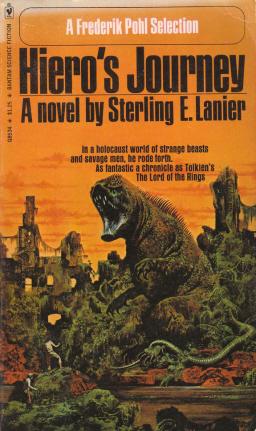 Tor.com writers Tim Callahan and Mordicai Knode have been reading Gary Gygax’s famous Appendix N, the list of fantasy and SF titles in the back of the Dungeon Master’s Guide. This time Tim Callahan tackles Sterling E. Lanier, author of Hiero’s Journey.

It’s a terrific article, but I note that the editors chose Darrell K. Sweet’s cover for the 1983 Del Rey edition to accompany it, featuring our hero next to his mutant giant moose, chatting amiably with a bear. Dudes. (Or Dames, I dunno.) That’s waaay too sedate a cover for Lanier’s classic. The Vincent di Fate cover for the 1974 Bantam paperback (at right) is the one you want. (Click for a much bigger version, showing that toothy dino in all his glory).

It’s… an incredibly enjoyable book. Lanier may not be even close to as famous as Robert E. Howard, Jack Vance, or Roger Zelazny or some of the others from Gygax’s list, but Hiero’s Journey constantly surprised me with its inventiveness and slow built toward a satirical climax. It also moves with a pace appropriate to a story about a guy riding a giant moose and unleashing the occasional psychic fury on mutated howler monkeys and other nefarious creatures….

It’s also a book that seems to have informed one of the weirder seemingly-slapped on aspects of Dungeons & Dragons — I’m speaking about psionics, which seemed out of place in the original AD&D Dungeon Master’s Guide — and almost the entirety of the later Gamma World game setting. Gygax isn’t credited with designing Gamma World, but James Ward’s original rulebook for Gamma World cites Hiero’s Journey as an influence, and with that game’s post-nuclear-holocaust setting and mutated animals and cities with names like primitive spellings of our own, it’s like playing scenes straight out of Lanier’s novel…

What Hiero and his companions find, as they explore and escape capture from the new breed of machine-friendly beings who don’t seem to recall what trouble technology hath wrought, is a deep and treacherous dungeon. This part is almost pure D&D adventuring, with roving monsters (mutated beasts) and foul threats from below.

Lanier wrote one sequel, The Unforsaken Hiero, in 1983. Both are long out of print, but available in digital editions. As Callahan notes, he’s probably best known for being an editor and taking a chance on an odd book from an obscure writer, and getting fired when it wasn’t a success in hardcover (the book was Dune, by Frank Herbert.)

I noticed this is third in the Appendix N series at Tor.com. We linked to the first, their discussion of Robert E. Howard, but somehow missed the second. Tor.com doesn’t trouble to link to the earlier articles, leaving it as an exercise to the reader. Team Black Gate is investigating.

You can see all of our recent Vintage Treasures articles here.

This novel was optioned by a movie studio (Warners, I think), and famed screenwriter Stirling Silliphant (In the Heat of the Night, The Towering Inferno, Route 66 and Naked City) wrote a screenplay for it. Unfortunately like many Hollywood projects it never got beyond that. It’s a great book, though.

I’m sure copies of it are floating around out there somewhere. Perhaps I’ll run across it at a con someday.

Wow, I really would like to read this now. There’s no doubt this also inspired Richard Corben’s amazing MUTANT WORLD as well as the Gamma World game.

For those who missed Mutant World:
http://johnrfultz.com/2012/06/25/the-cosmic-eye-summer-readings-i/

Oh, and SON OF MUTANT world was the sequel–and even better!

Here’s the URL where all of the articles of the series can be found:

The second article was about Poul Anderson’s Three Hearts and Three Lions.

Thanks Inkstain! There was a link at Tor.com, but it was busted (at least, it was this morning).

Just ordered my copy of HIERO DESTEEN from Amazon–it collects both books (HIERO’S JOURNEY and THE UNFORSAKEN HIERO) in a single hardcover.

Of all the covers, my favorite is the Darrell K. Sweet cover for UNFORSAKEN HIERO:

Oh… THAT’s what that is. For some reason I thought it was a German version of HIERO’S JOURNEY.

And yeah, Sweet’s cover for THE UNFORSAKEN HERO is much more visually interesting than his first. But the Di Fate is still my favorite.

I wish you had posted this a few days ago. I just ordered the book with the sedate cover. I should get it on Monday. Oh well!

Yes, you can’t go wrong with the great Vincent DiFate! I contented myself with a digital version, which I downloaded right here: http://reviewsforkicks.files.wordpress.com/2009/12/hieroj.jpg

Sorry! You can still enjoy the digital version of the Di Fate cover, though. 🙂

Di Fate has a few art books out. He did a marvelous number of covers for Analog and Berkely Books over the years — including the first Riverworld paperbacks. Some great stuff.

I first discovered DiFate’s work in college when I bought a copy of WEIRD TALES #295 off the stand–an all-DiFate art issue. The story that utterly blew my mind in that issue was Schweitzer’s KING YVORIAN’S WAGER. It was like the second Schweitzer ale I had ever read.

The cover is a gorgeous DiFate piece (of course): http://howardworks.com/weirdtalesv51n2.jpg

THANKS!!
I’d forgottent this one! wow!

John,
Ok, you’ll have to send me a copy [because I know the Cave of Wonders contains one!]. Everything about this seems to have now made it a ‘must read’

[…] readings in Appendix N of the first edition Dungeon Masters Guide (the first two are here and here). The authors in this list are the usual suspects in fantasy literature: Robert E. Howard, Fritz […]

Just finished Hiero’s Journey and loved it! I thought it was highly innovative, from my perspective, for a 40 year old book. I’ll have to track down the sequel.

As an aside, I think I like the 1980s Del Rey Darrell K. Sweet cover better than the original that John suggests. I think Sweet’s cover communicates something of the feel of the book that the original does not. The original cover makes me feel that the book would be something totally different from what it actually was. I found the Sweet cover to be suggestive, and correctly so, of the overall mood of the book.

OF COURSE the Cave of Wonders contains a duplicate copy (several, probably).

The trick, as usual, is FINDING one. It’s probably packed in with all the books we sell at conventions, and you know how disorganized those boxes are…

But if I run across one, it’s yours.

> I think Sweet’s cover communicates something of the feel of the book that the original does not.
> The original cover makes me feel that the book would be something totally different from what it
> actually was. I found the Sweet cover to be suggestive, and correctly so, of the overall mood of the book.

Huh. You know, I think you may be right. I haven’t read Hiero’s Journey for over 30 years, and the first copy I purchased was the di Fate edition, so that cover was the defining image for the novel for me.

But I think you may be right that the Sweet cover captures some of the exploratory, pacifist tone of the book better than the di Fate. I’ll have to read it again to be sure.

I’m about three chapters into HIERO’S JOURNEY, and I’m really digging it. I never would have known this book existed if not for this article, so THANKS, John! It’s part western, part sci-fi, and part fantasy. (And you can almost picture the creators of the original GAMMA WORLD sitting with a copy of this book, taking notes, and writing it all down for gaming ideas.) Coming out in 1974, this book almost had to have been inspired by the PLANET OF THE APES movies. I’ve always had a fascination with post-apocalyptic adventures (I even wrote a post-apocalyptic novel in college, which will never see the light of day–all long hand in a pile of spiral-bound notebooks), and this is one of the all-time greats in that sub-genre. I also wonder if it was inspired by Stephen Vincent Benét’s classic 1937 story “By the Waters of Babylon” (originally titled “The Place of the Gods”), wherein a young tribesman explores the ruins of a dead city in the northeastern United States, generations after a war in which future weapons caused “The Great Burning.” Amazing when you consider that Benet’s story was written a decade BEFORE the first atomic bombs were invented…

Glad you’re enjoying it! And I like your PLANET OF THE APES theory — it certainly fits!

I wasn’t aware of Stephen Vincent Benét’s story, but I certainly should be! I need to check that out. I’m sure it’s an at least one or two anthologies near at hand… I wonder if it’s in THE WEIRD…