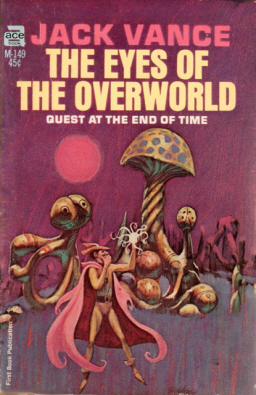 Ah, Appendix N, the gift that keeps on giving. In the years before the Internet, it’s how young readers discovered great fantasy.

Over at Tor.com, Tim Callahan and Mordicai Knode continue with their ambitious and well-researched journey through Gary Gygax’s famous Appendix N, the library of fantasy and SF titles in the back of the Dungeon Master’s Guide. They’ve already covered Fritz Leiber, Edgar Rice Burroughs, Sterling E. Lanier and Robert E. Howard. Here they are on Jack Vance:

Mordicai Knode: Also worth noting that everybody’s favorite evil wizard turned lich turned demigod turned major deity, Vecna, is named after a “Vance” anagram. & while we are pointing out bits and pieces — like the prismatic spray, which is such an amazing piece of writing, such a great turn of phrase, that it inspired a whole range of spells — I want to mention the ioun stones. In Dungeons & Dragons they are these little gemstones that float around your head—I always imagined the Bit from Tron — but in The Dying Earth story that inspired them, the IOUN stones are much more sinister and are gleaned from the center of a dwarf star that has been cut in half by the shrinking edges of the universe. Just let that sink in; that is really an incredible idea… And those sorts of ideas are scattered all over the book, like some pirate with holes in his pocket idly scattered gold doubloons all over it.

Tim Callahan: It’s kind of like, for me anyway, when I was a kid, and I’d read the AD&D Player’s Handbook or Dungeon Master’s Guide and just read through some of the spell names or magic item titles (without reading the descriptions below) and imagine what weird and wonderful things these powers and items could do. Vance reminded me of that world of possibilities, almost on every page.

We last covered Mordicai and Tim on July 17th, when they discussed Fritz Leiber and Edgar Rice Burroughs. The list of authors they’ve covered includes:

Next up: August Derleth.

[…] Appendix N, which lists the great fantasy writers whose collective contributions laid the groundwork for Dungeons and Dragons, is just one of those finds, but it’s one which has received a great deal of attention. Mordicai Knode and Tim Callahan at Tor.com are sampling the work of every author in Appendix N; so far they’ve covered Robert E. Howard, Poul Anderson, Sterling E. Lanier, Fritz Leiber, Edgar Rice Burroughs, and Jack Vance. […]